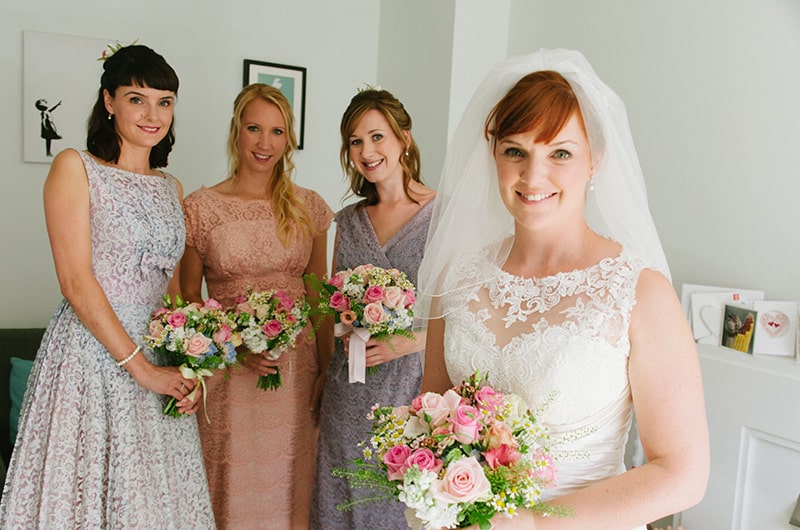 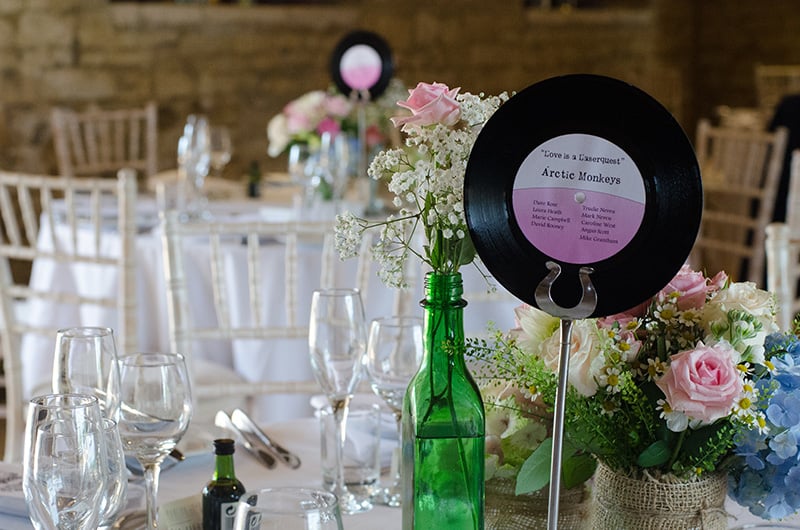 A love for music and a love for each other is something that oozes out of Rose & Jake’s gorgeous wedding photos!

A vinyl record seating plan, musical table names and sheet music place settings are just a few of the fun touches that this couple worked into their wedding to ensure their personalities were shining through on their big day! Nobody could tell the story better than Rose & Jake themselves though so I’m going to hand you over… 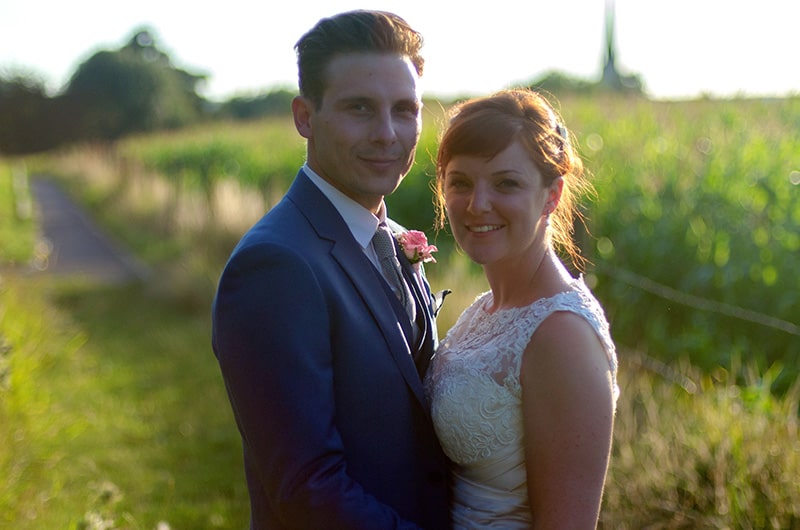 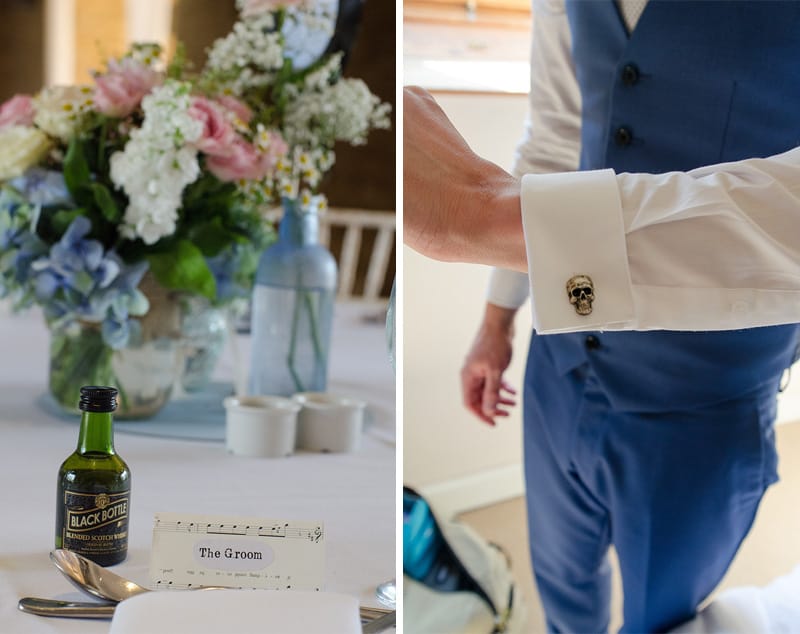 “The wedding was held at St. Mary’s Church, Charlton Kings, Cheltenham followed by the Great Tythe Barn at Tetbury. The church was chosen because it was such a beautiful little church with a village feel, and as we had both grown up in villages in Somerset (Rose) and Dorset (Jake) but decided to get married in the place that we met in as university students, we wanted a church that felt intimate and our own. The Great Tythe Barn is stunning and has plenty of accommodation for family travelling and staying. The cottages are so cute and we had the only cottage for 2 so we got to see all family & friends the next day there too!

To make the day more personal and unique we had small details that were a nod to our love of music, such as the tables being named after songs that we love such as Everlong by Foo Fighters (‘Everlong’ is also inscribed in both our wedding rings!) and Old Fashioned by Frightened Rabbit. Our table plan was made up of vinyls and these were also what were displayed on the tables. The flowers also sat on a vinyl that had been sprayed a pastel colour by our wonderful florist, Sara at Aquaflorist. Our place names were even the sheet music to ‘Everlong’ chopped up so that you could see a line from it!” 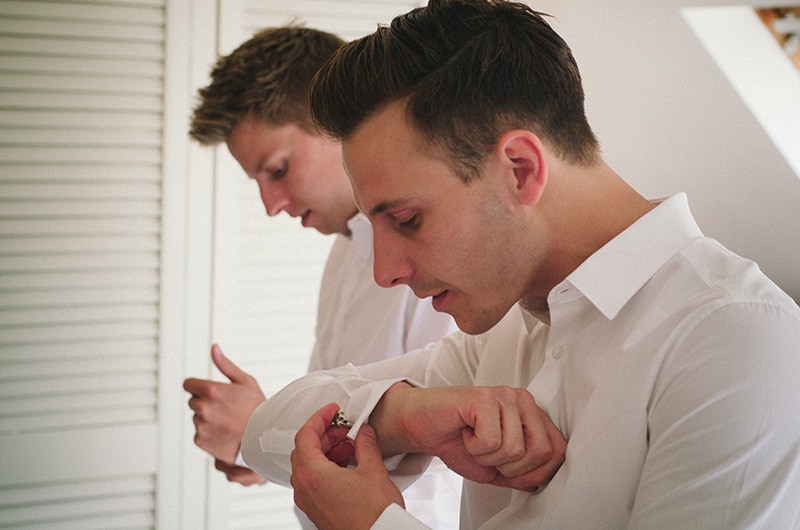 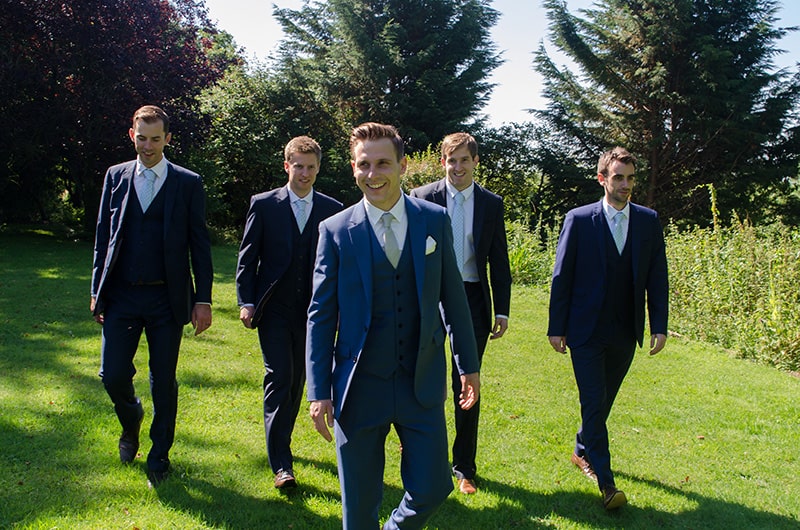 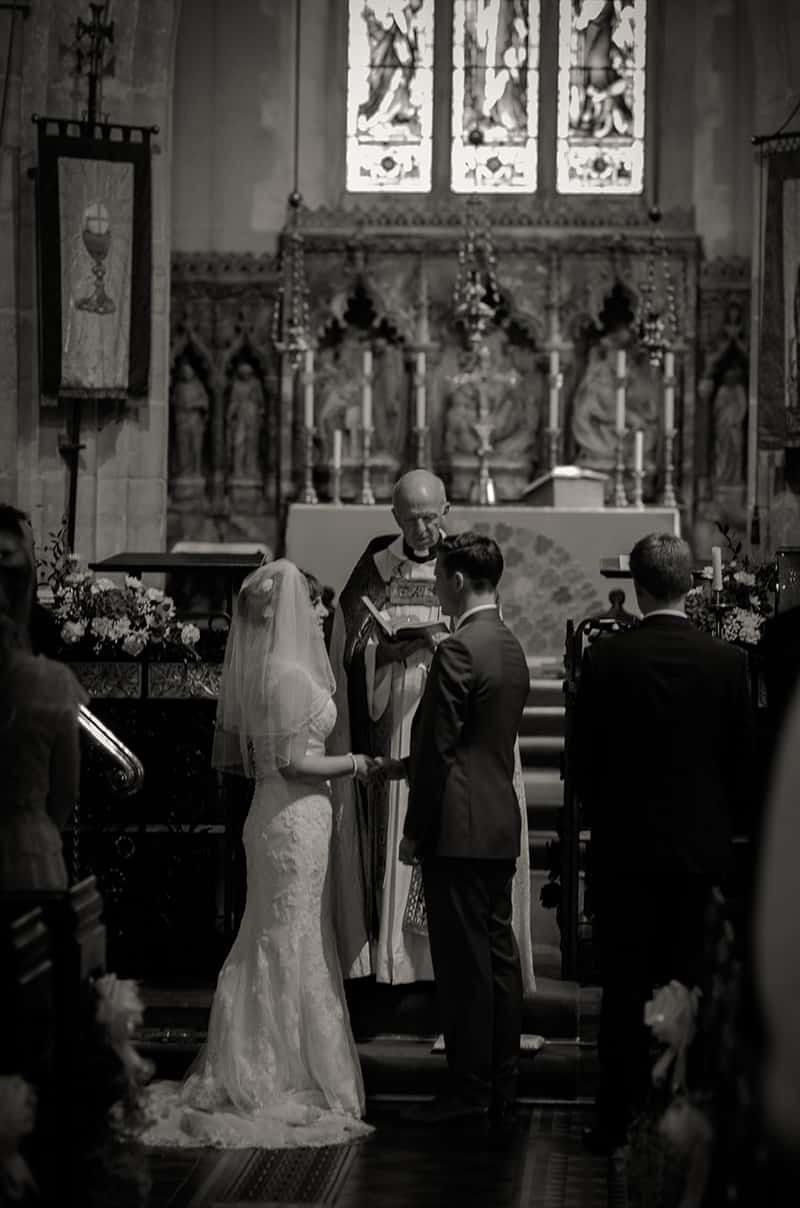 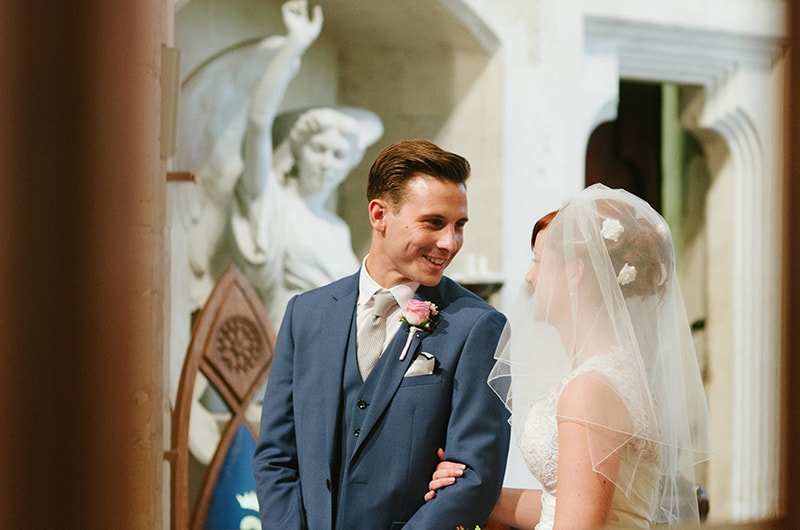 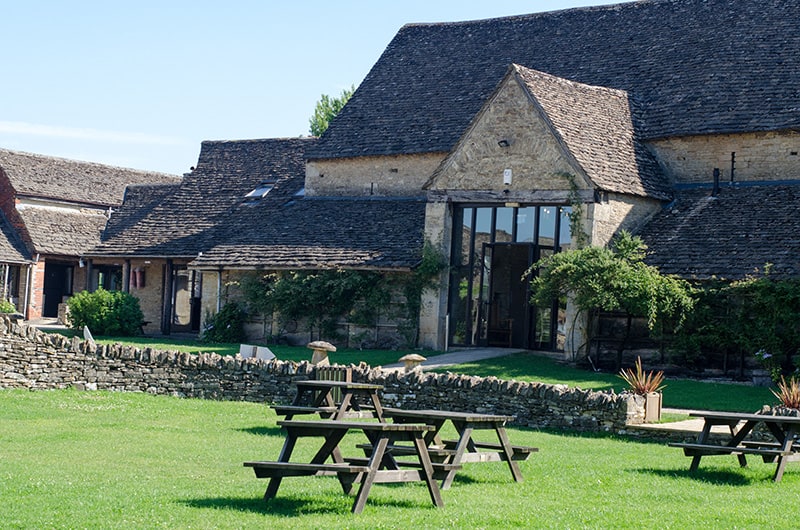 “We also had a heart with lots of photos, and being animal lovers we had photos of past and present pets we had/have. There is also a photo of us both looking grumpy as children which is something that still makes us ( and friends! laugh at).

Jake wore skull cufflinks which I had given to him as a present for his 30th from Etsy. We both like skulls but felt it didn’t quite make a wedding theme, so it was great to see that we got skulls in somehow! I knew how handsome Jake would look on the day, as I had been to Reiss with him to get kitted out! However, he was expecting me in a short 50s number as I usually would choose that style, so he has since said I threw him a real curve ball when turning up in a fitted floor length designer dress! He could only see the silhouette coming up the aisle as the weather was so bright and beautiful that day!” 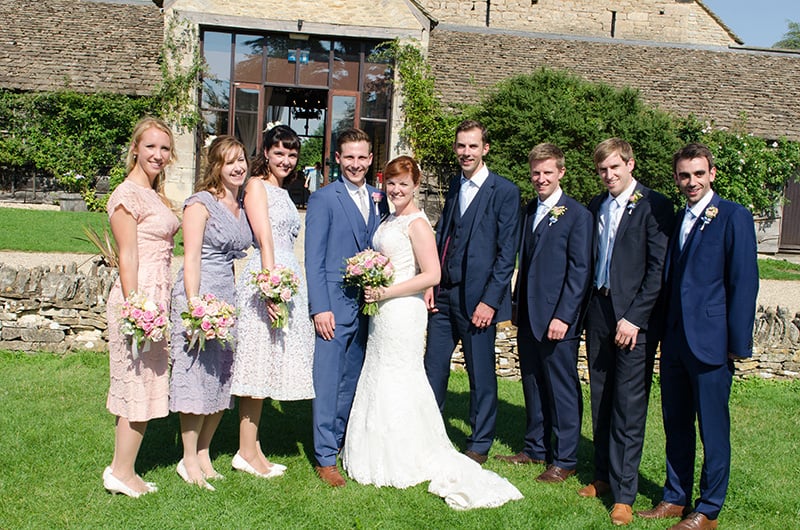 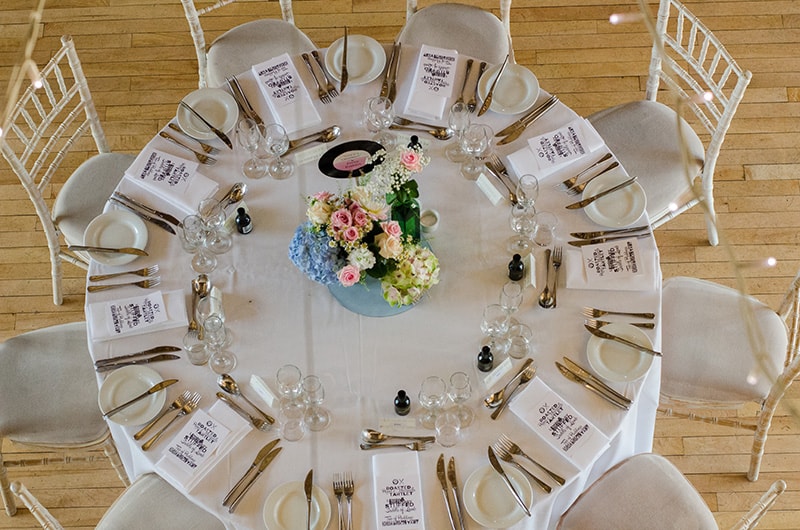 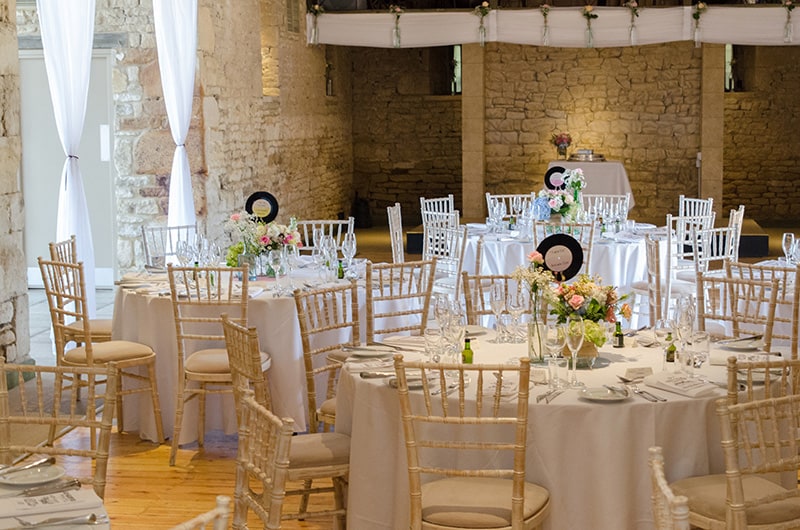 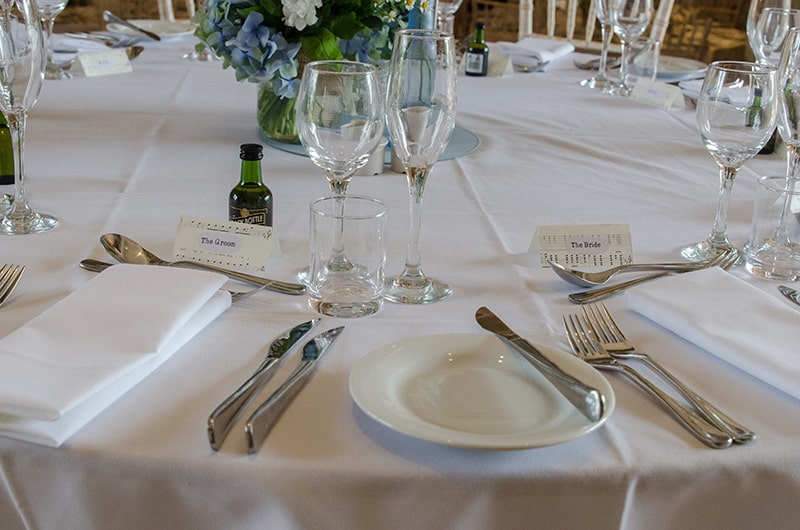 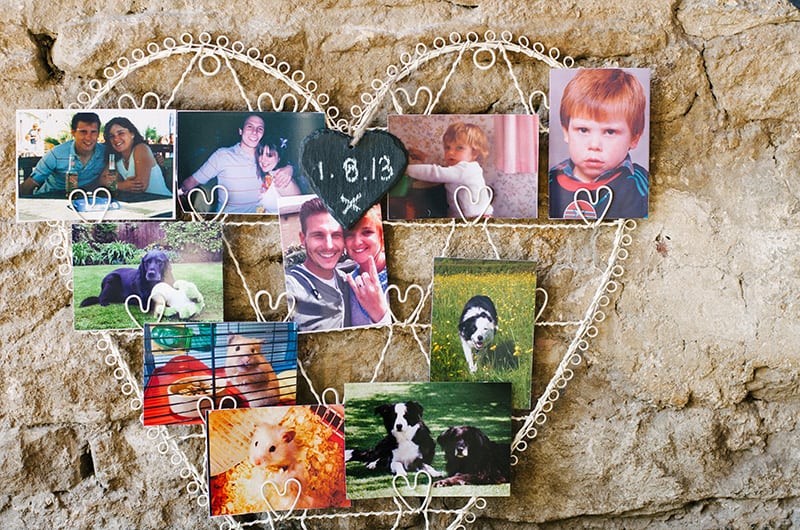 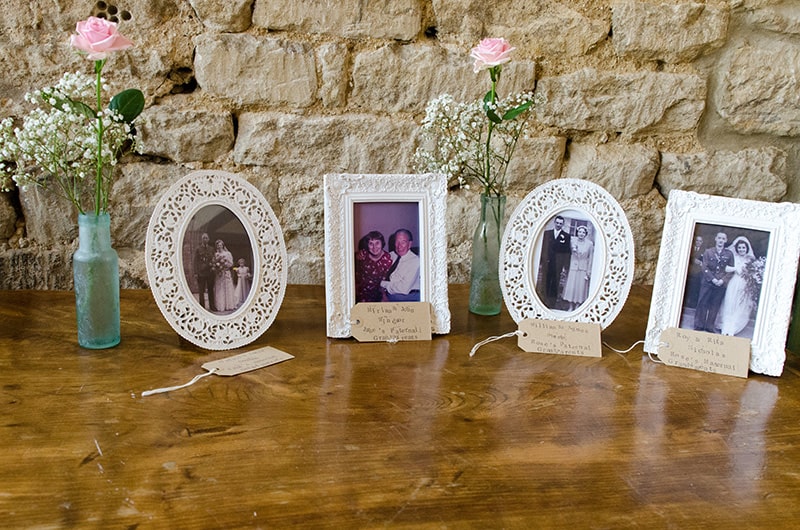 “Something very special was having 4 photos out on the table showing all of our grandparents’ wedding photos, and as there was only one set of grandparents still with us, this made it feel very special to have them out. I did a luggage label next to each photo detailing who they were. Also, as I’m a teacher, in the church, during the signing of the register we had the infant choir singing which didn’t leave a dry eye in the congregation!

As the barn is pretty stunning itself, it didn’t need much decoration so we just had clear bottles hanging with single stems in, we also had these in the alcoves. There was a selection of about 3 jars/bottles in the centre of each table – we wanted to keep it simple and with pastels being the theme, since each of the bridesmaids dresses was a different pastel colour – pink, blue, lilac. Roses and hydrangeas played a big part in our bouquets and on the tables too.” 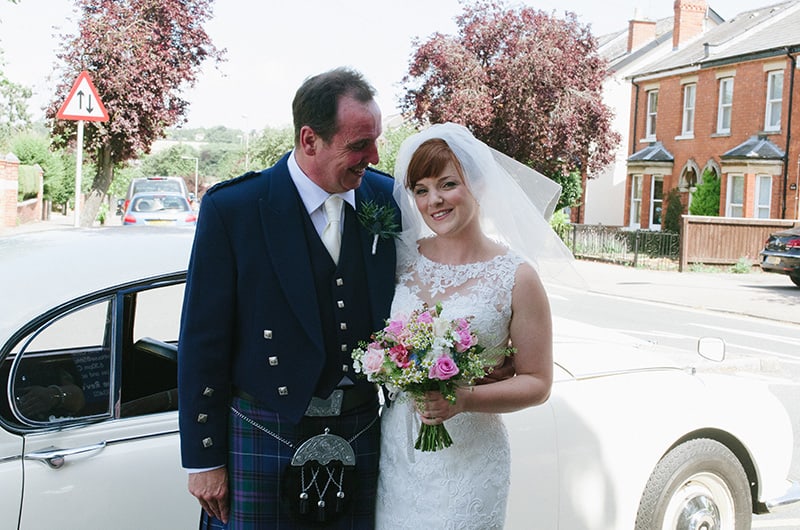 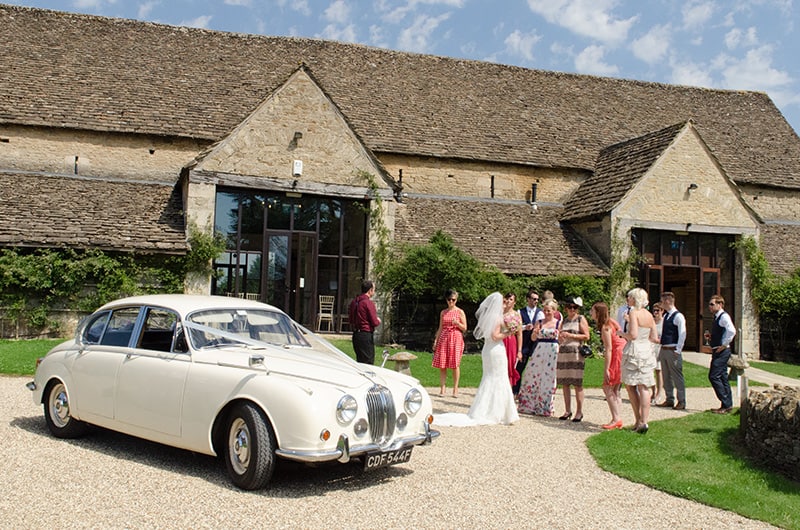 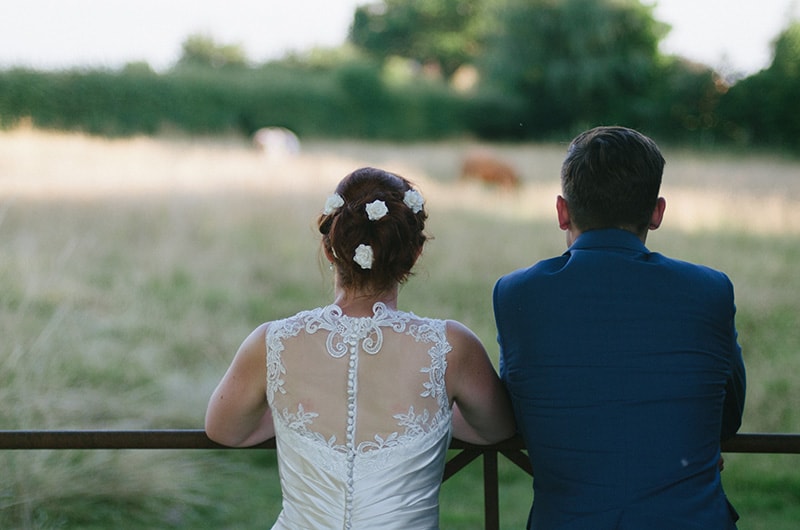 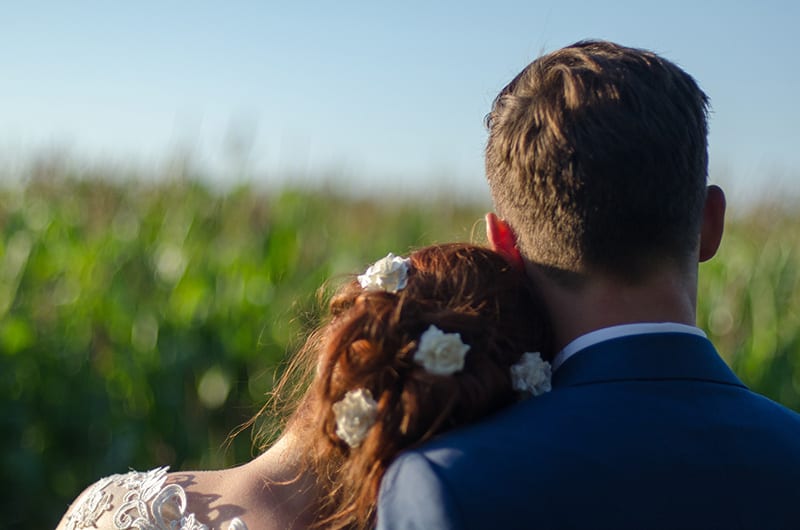 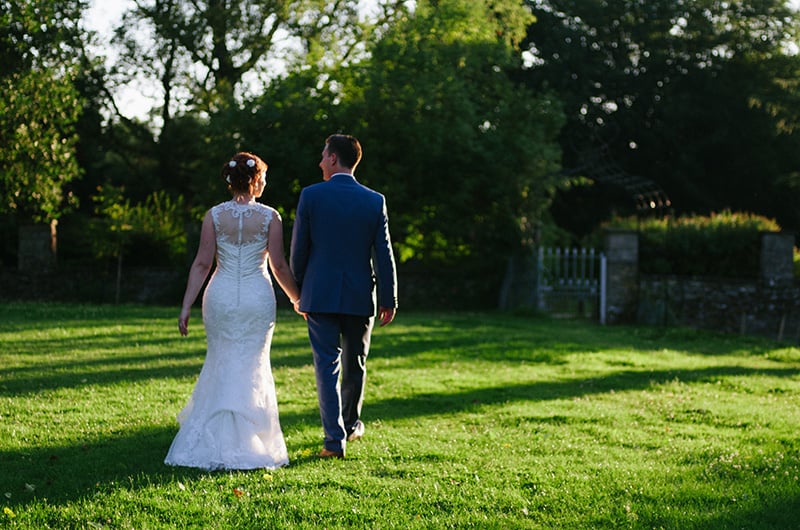 “Our photographer is a family friend who also photographed my sister’s wedding last year. He is called Neil Light, and we chose him because he had done such a good job with previous weddings and not only that but we felt so comfortable with him. He is a true gentleman and it really was like having a member of the family taking the pictures, I’ve known him for 13 years! He works around you, is never intrusive and produces brilliant images!

We had a ‘naked’ cake – no icing – done by Xavier at the contemporary cake designs based in Cheltenham which was 3 levels of Victoria sponge with fresh berries! On top was the Sylvanian bride and groom! Sylvanians are great sizes for wedding toppers! Entertainment was provided by a brilliant rock and roll band from Nottingham called Reverend Ribble and the Gingernuts who learnt 2 songs especially for us! They are a cool looking band who are very 1950s influenced!

I walked up the aisle to the church organist playing ‘Intervention’ by Arcade Fire which he had learnt especially too and it sounded amazing on the organ! We also walked into the wedding breakfast to ‘Wake Up’ by Arcade Fire. We travelled from the church to the barn (with a small bottle of champagne in tow!) in a Jaguar 240 MkII which my dad had kindly organised, being a big Jaguar fan! We had also organised a table tennis table for our guests to play on the lawn outside the barn!” 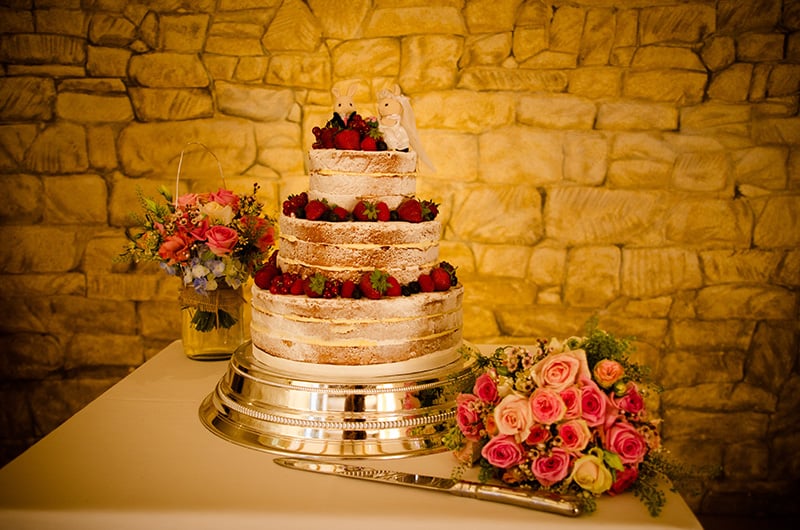 “The bridesmaid dresses were from a vintage dress collector in Bristol, called Francesca Charlton who has the most amazing stash of vintage dresses! My mum, the bridesmaids and I all went together and had a wonderful day at Francesca’s studio seeing the 3 girls trying the dresses on, until we found the perfect combination. I had my sister in blue, my best friend from childhood Natalie in pink, and my best friend from uni Anna in lilac. I am so pleased that the mismatched colours worked so well, it was a gamble as I’d only seen it on the internet, but the weather being sunny suited the colours of the flowers and dresses so beautifully. They were all from the 1960’s and only needed slight alterations by Natalie’s mum Shelley. They had pearl drop earrings, a pearl bracelet plus ivory shoes and their nails and makeup was done by the lovely Georgie Charles Bridal Makeup, a makeup artist of 23 years, she was wonderful!

My dress was from By Design in Gloucester, Sarah Carter who owns the shop was such a lovely person to meet whilst trying to find ‘the one’. She was so laid back and I loved going to her shop with Mum & trying on a real range of dresses. In the end, after initially thinking I was going to have a short dress, Justin Alexander’s 8596 made me feel so feminine and curvy and once we had put the deposit down, I didn’t have a single wobble about it! My elbow length veil was also from By Design and my ivory shoes were from the Rainbow Club in John Lewis.

Jake’s outfit was from Reiss and it was a French navy suit with waistcoat, with a crisp white shirt, light grey tie and brown shoes. He had a pale pink button hole and he looked so handsome! The ushers were also in navy with brown shoes, white shirts and a pale blue with white polka dots ties.

Claire at Crown Catering was fantastic and so professional on the day, making us feel calm and looking after us beautifully. The food was incredible too and so many guests ranked it in their top 3 wedding food!” 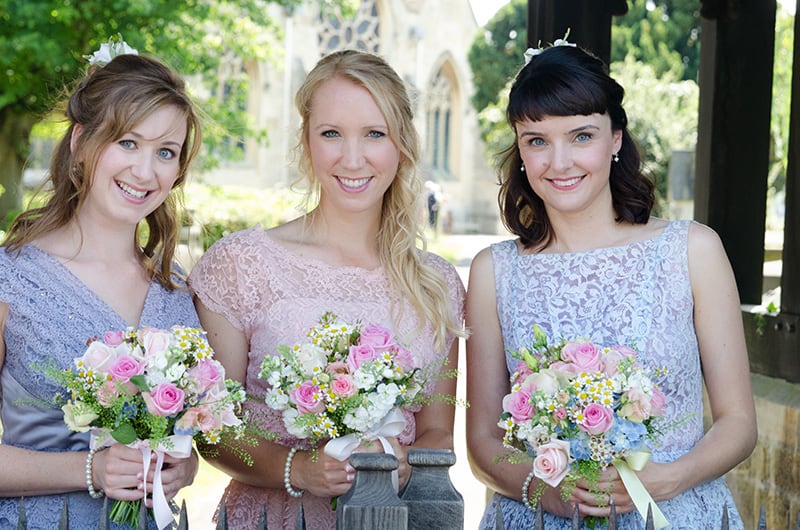 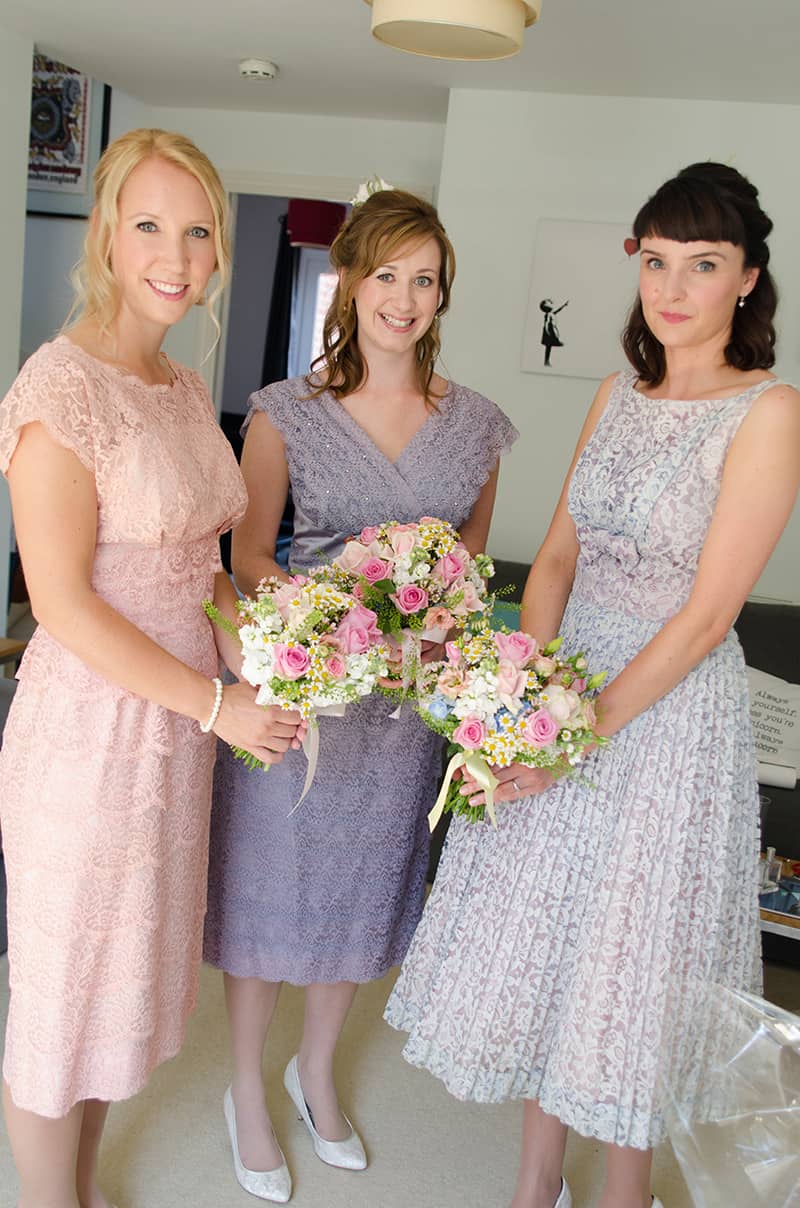 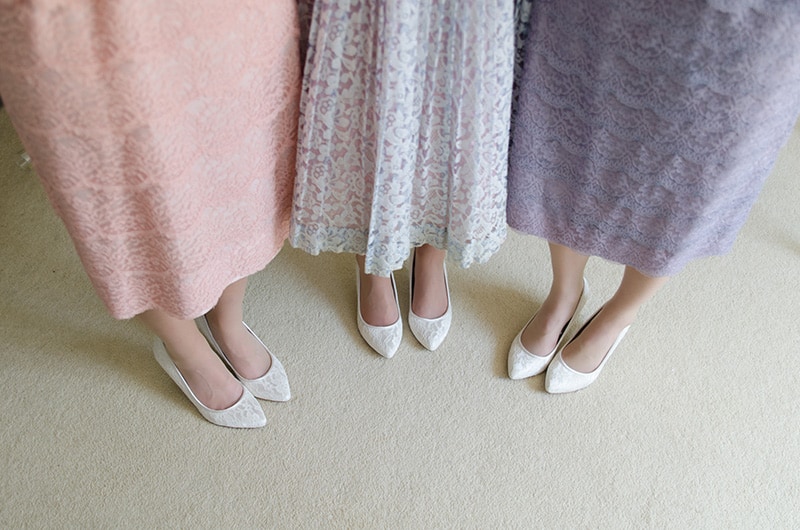 “Our advice for couples getting married would be to keep it personal; it is so easy to make it look like a generic wedding but it is important to show both personalities through your choices! Enjoy every moment but get a good photographer so that when you look at the photos, you can feel like you are in that moment just by looking at them.” 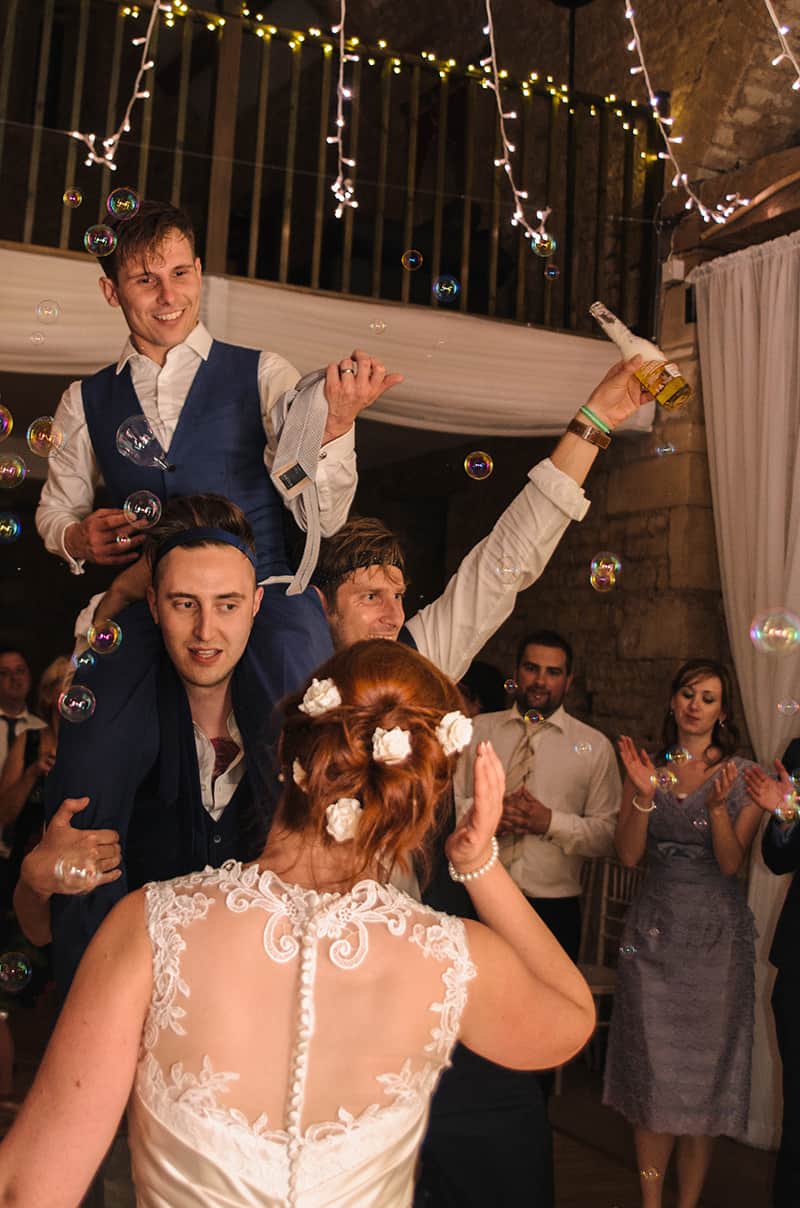 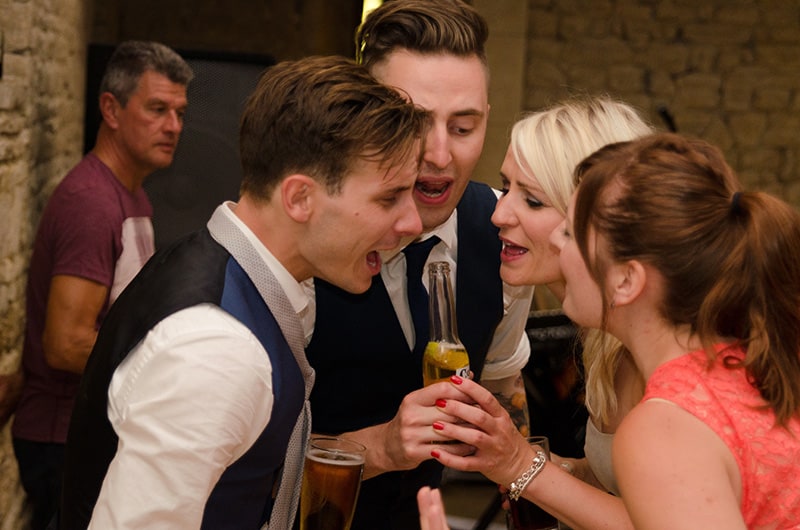 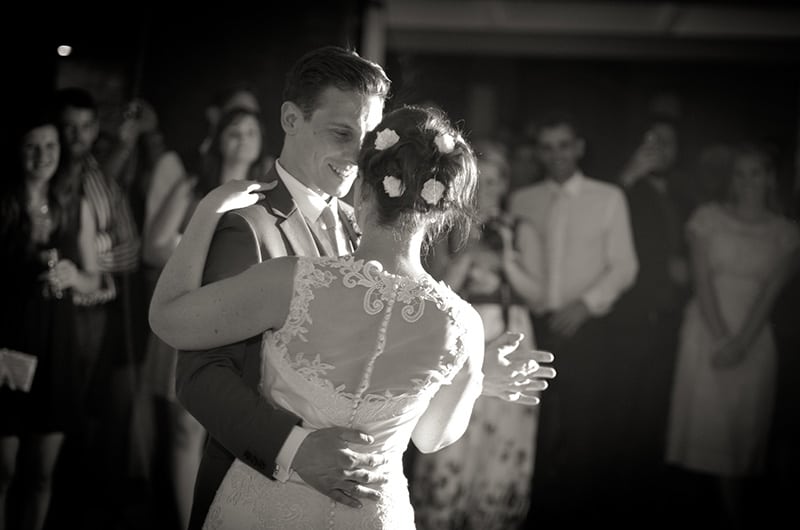 We want to wish Rose & Jake all the happiness in the world and the best of luck for their future together!

COUPLES THAT CROSS STITCH TOGETHER STAY TOGETHER
March 5, 2020