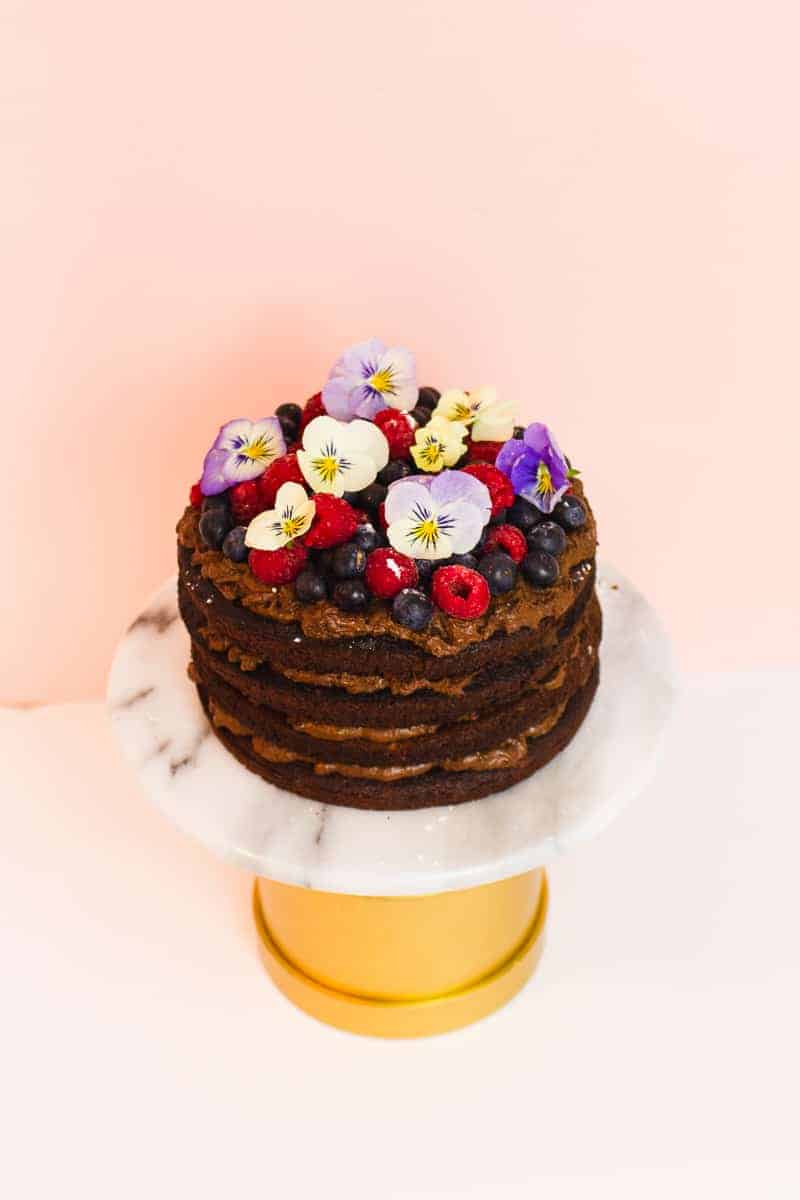 Oh chocolate, let us count the ways we love thee! We’ve been wanting to introduce some more recipe posts around here for a while now and today is the first of them! We’re going to be sharing a bunch of vegan recipes that are perfect for parties, so whether you’re throwing a bridal shower and want to whip up a cake or are after the prettiest of sweet treats to display then watch this space! We’re super excited to start sharing more and more of these but for now, let’s get to work on this vegan chocolate mousse cake recipe shall we?! I originally saw this in Vegan Food & Living magazine and wanted to give it a try, here’s how to bake your own! 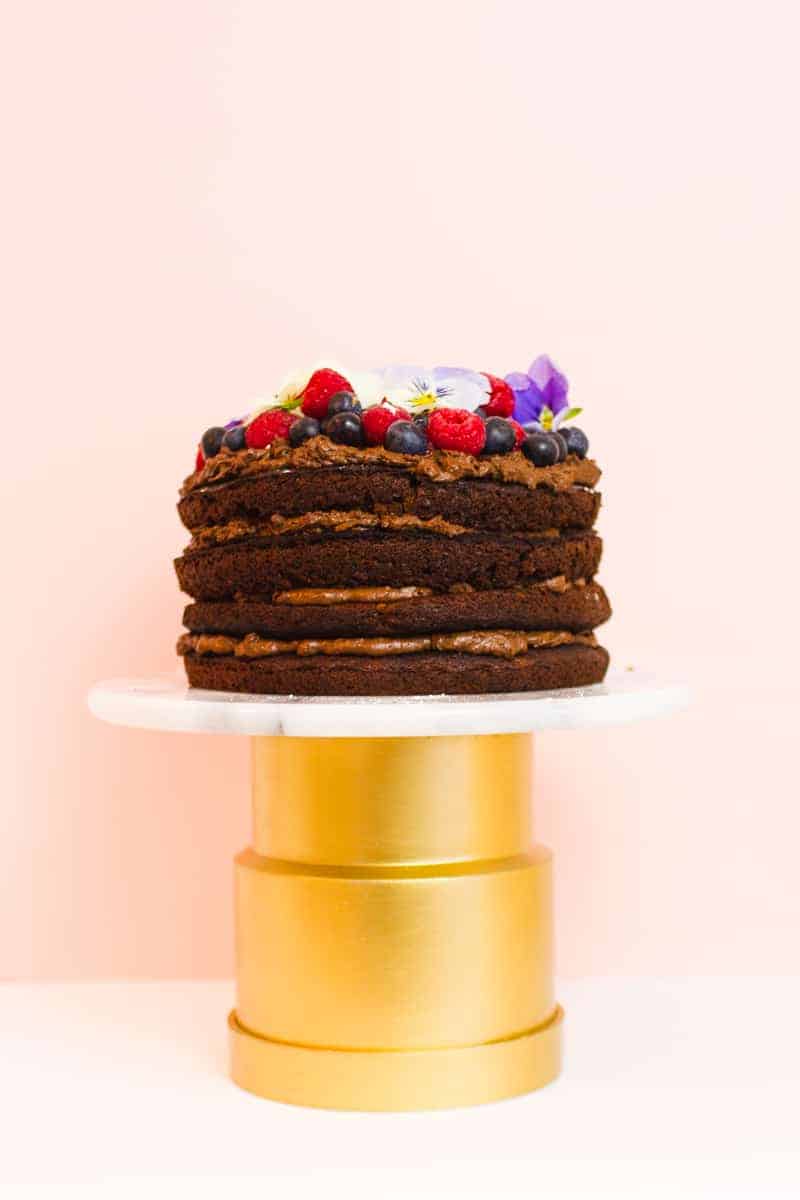 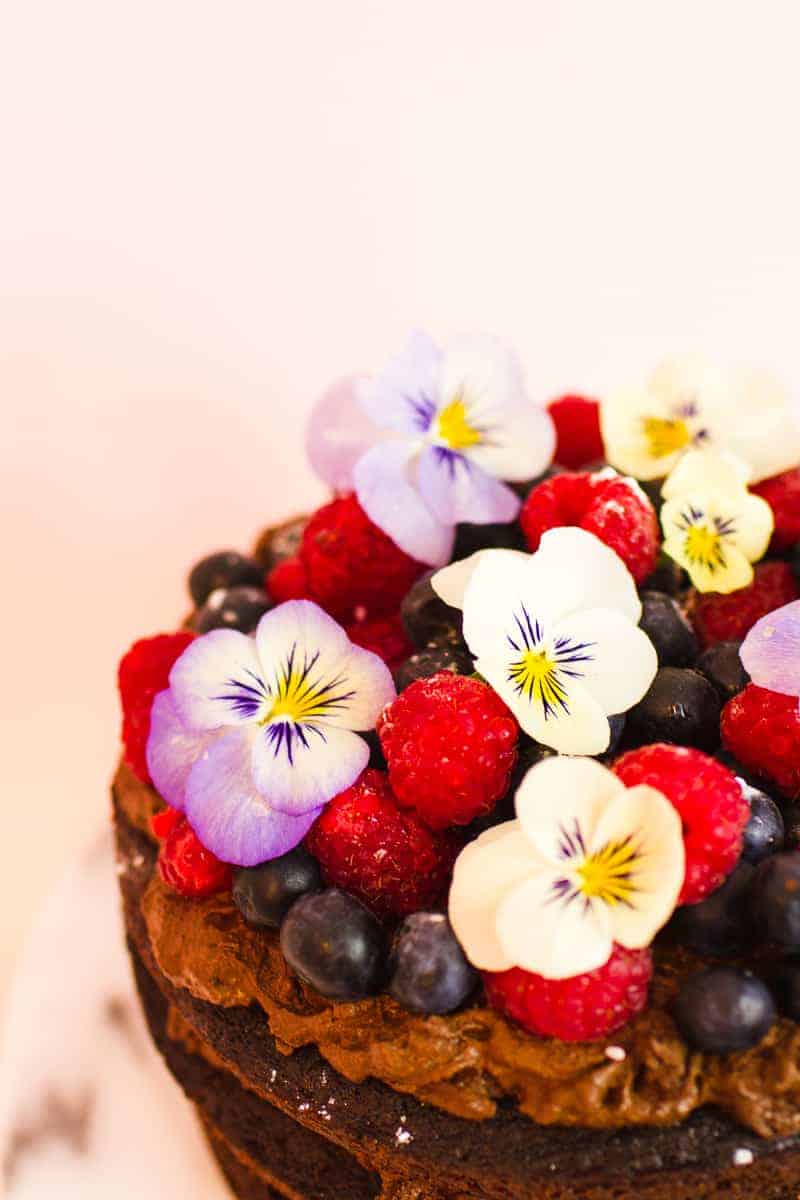 FOR 2 SPONGES YOU WILL NEED:

(I found that my sponges didn’t rise as much as I wanted them to, not sure if this was because I used cacao powder instead of cocoa powder so I made another 2 sponges to build more height on the cake) 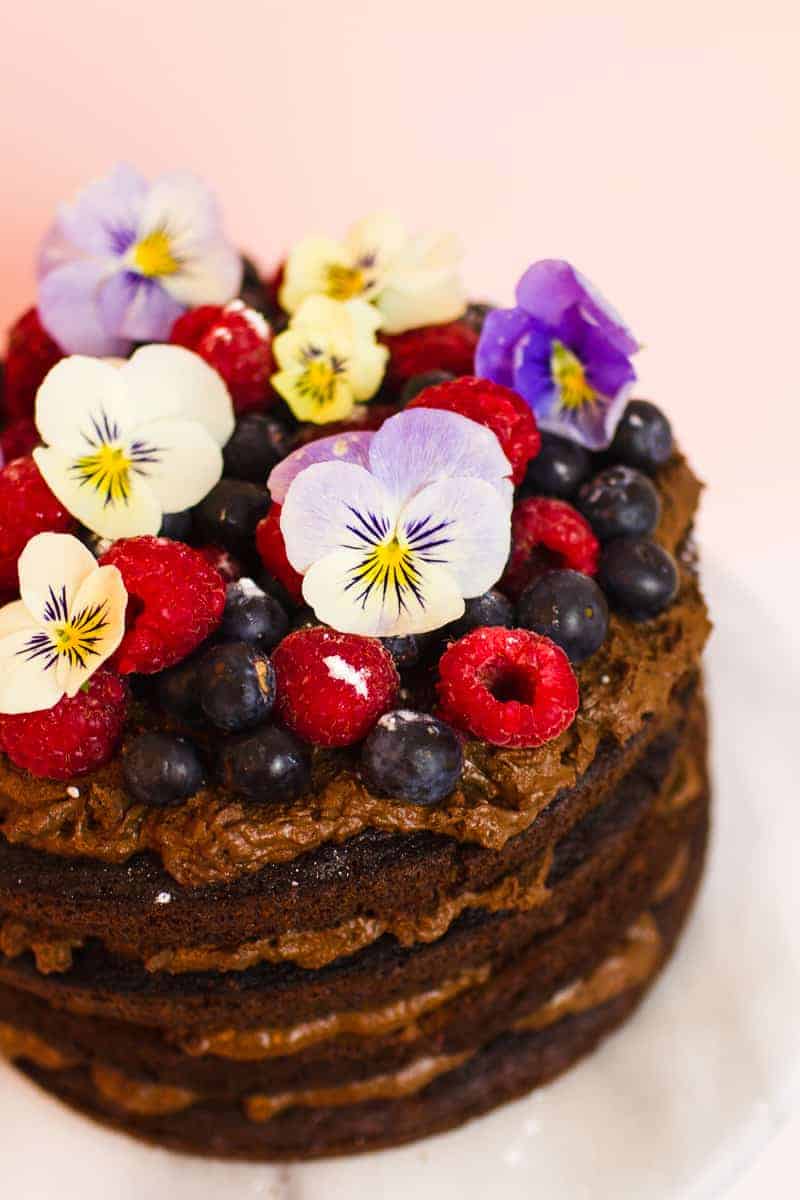 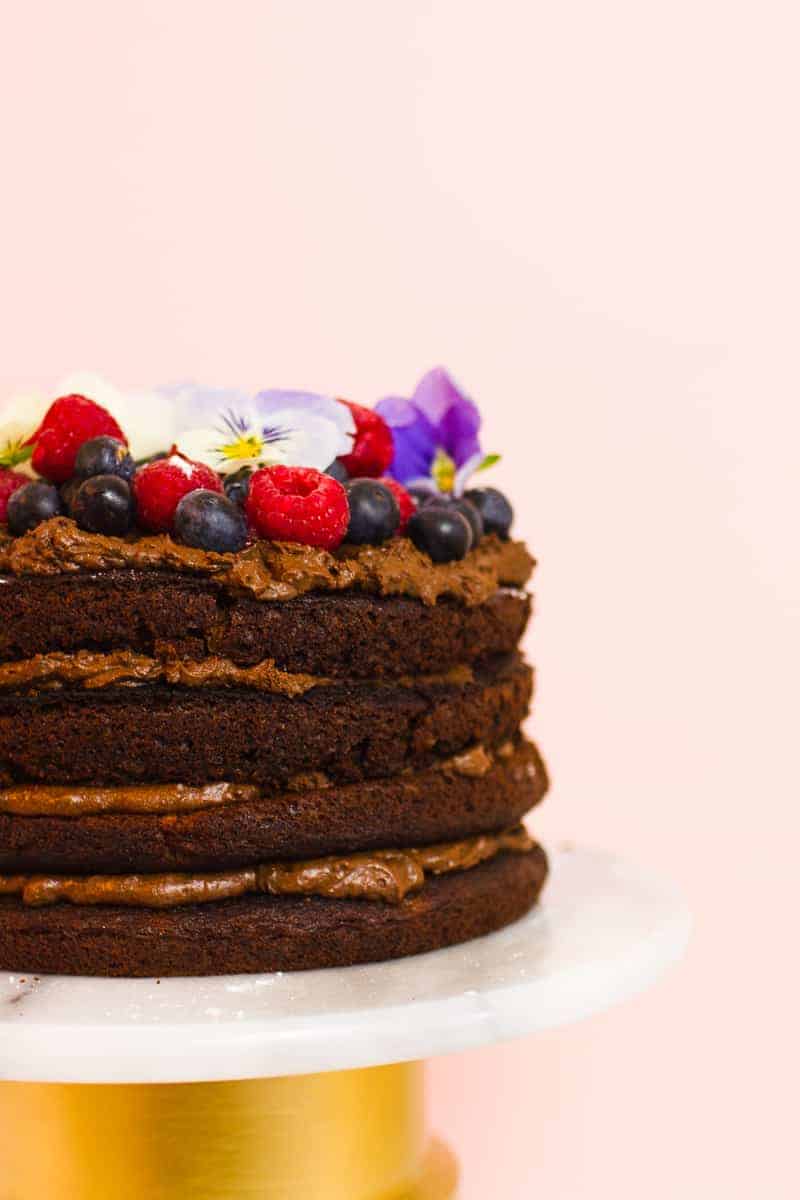 To start, preheat your oven to 180C, gas mark 4, then grease and line two 7inch cake tins with greaseproof paper.

Stir together the flour, bicarbonate of soda, baking powder, cocoa powder and salt in a large mixing bowl.

Whisk together the aquafaba, melted coconut oil, vinegar, apple sauce and sugar in a measuring jug until the sugar has partly dissolved.

Add the wet ingredients to the dry and mix well until a batter forms. Divide between the prepared cake tins and tap a few times on a flat surface to help settle the batter.

Bake for 20-25 minutes until risen and slightly springy to touch, if you pop a knife or cake tester into the centre of the cake they should come out clean. Then place the tins on wire racks to cool.

For the mousse, place the chocolate in a heatproof bowl and set it over a half filled saucepan of simmering water. Stir occasionally until melted. Then remove the bowl from the heat and set aside to cool.

Tip the aquafaba into a mixing bowl then add the cream of tartar and beat with an electric mixer until it forms stiff peaks (should be about 4-6 minutes). I must admit this step completely amazed me how well this whipped up! Then, fold the melted chocolate into the whipped aquafaba until thoroughly incorporated. Cover and chill for at least 1 hour.

To decorate, turn out the sponges from their tins, if needed, trim their tops flat using a serrated knife. Then, sit one sponge on your cake stand and cover it’s top the mousse. I just spooned by on but if you want the cake to a look a little more fancy then carefully spoon the mousse into a large piping bag and pipe the mousse on. Then sit the second sponge on top, pressing down gently to stick to the piped mousse. Continue to layer the sponges until you reach the top.

Finally, pipe or spoon more mousse on top of the cake and decorate with the berries and edible flowers. 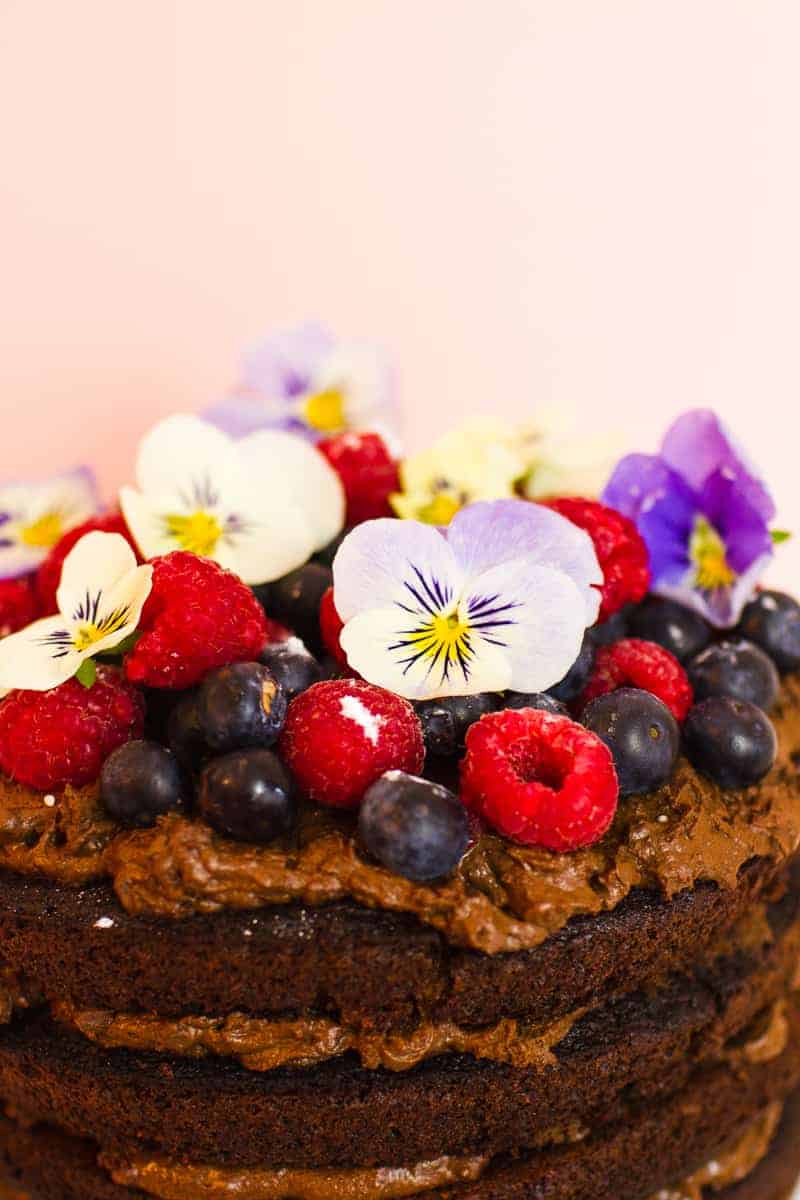 Now cut yourself off a slice and enjoy! xx

P.S If you want to make yourself a marble cake stand like this one then click here for the tutorial!

Best Signature Cocktails for a Wedding Made with Tequila
May 13, 2022