Travel Gawker: When I Went to Borneo…

Travel Gawker: When I Went to Borneo… 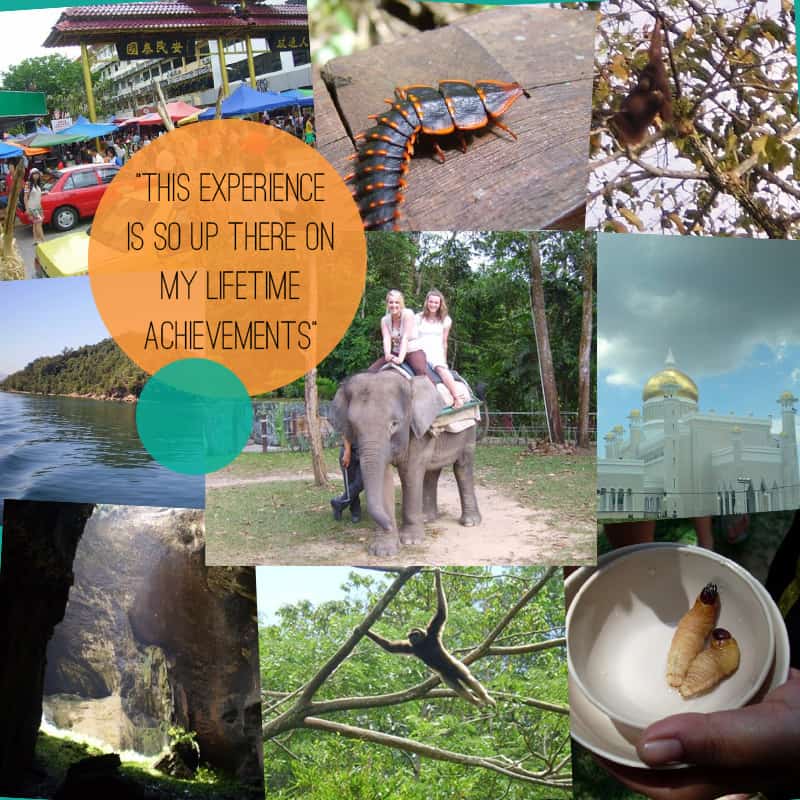 Some might be surprised to know that I have a degree in animal biology and ecology and it is because of this very trip that decided I wanted to continue with my studies. It all began with a newspaper clipping that my dad had kept for me which included photos of an Orangutan swimming in the river Rungan in Borneo. The feature was detailing the stark reality that tropical rainforests are disappearing at such a rate that many animals are having to find ways to escape the islands they have become marooned on in order to find more food.

The Orangutan has always been my favourite animal so seeing these pictures made me determined to follow my dream of experiencing these animals in their natural habitat. I was lucky that I was in a class with other like minded students, so with the help of our college lecturers we raised enough money for a small group of us to make the trip to Kota Kinabalu in Sabah, Borneo. 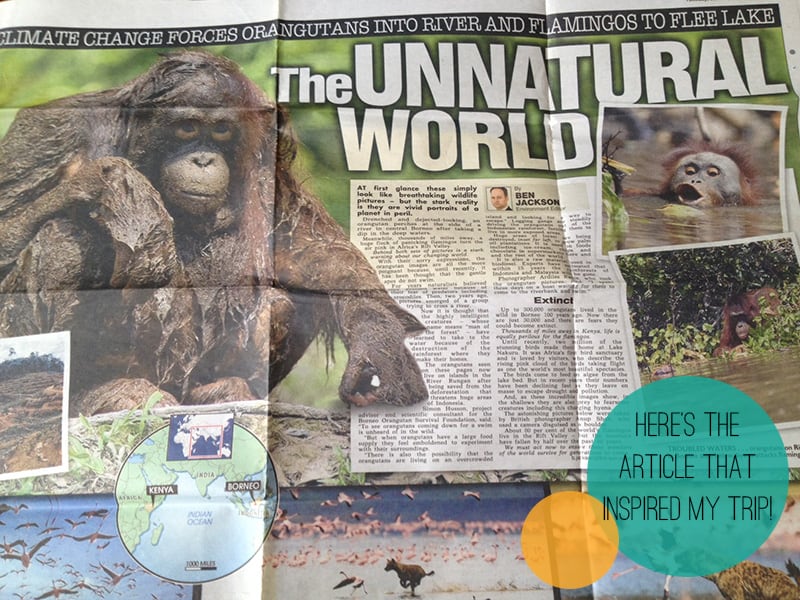 The trip was rather gruelling but worth every minute and every penny. We spent 14 hours on the plane to Kuala Lumpur, with one stopover in Dubai. We then had to take an internal flight from to Kuala Lumpur to Brunei and this is where our journey really began.

We had a couple of hours to spend in Brunei before taking making the journey by bus to Kota Kinabalu so we decided to visit the worlds largest water village, which stretches over 8km and is home to some 30,000 people. Whilst there we learnt how to hail a water taxi, took tea with some locals and visited the water village’s cultural and tourism museum. It was a strange experience seeing so many people living on the water, the children hail these water taxis every morning in order to get to school – can you imagine that? It was a little bit different to hailing a cab let me tell you. 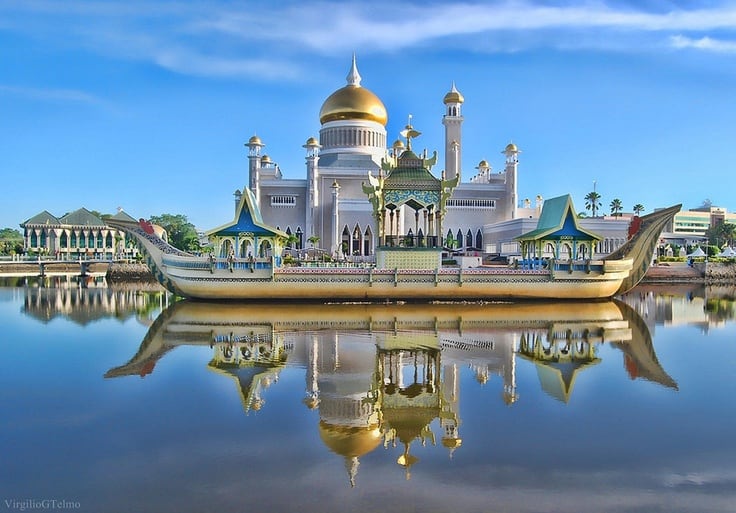 You must also see… the Sultan of Brunei’s palace. To be honest I would be surprised if you missed it, it is quite a landmark in amongst all the smaller wooden huts but it is a sight to behold!

Once in Kota Kinabalu we stayed at the Langkah Syabas beach resort situated in the quiet town of Kampung Kinarut Laut (which means village by the sea) in Sabah. Our first trip was to Selingaan island, otherwise known as turtle island, where I felt highly privileged to be one of only a few that will ever get to see the young of the endangered green turtle released into the sea. We had to wait for a female to come ashore before descending down to the beach, this was especially important so as not to scare the turtle into returning to the water without laying her eggs. Later that evening we got news from the ranger that a female had been spotted ashore so we were quietly led down to the beach to watch the giant turtle lay her eggs in her nest. Once she had laid all her eggs, she covered the nest with sand returned to the sea. This experience in itself was breathtaking,  I was totally mesmerized by the peacefulness of the whole experience and the sheer size of the female turtle was not something I had anticipated.

Once the female was gone, the conservationists set to work digging up the nest and carefully collecting all the eggs to take back to the hatchery. Here we were able to take a look at how the rangers monitored the eggs, we were also lucky enough to be able to witness a few of the tiny hatchlings emerging from their eggs and along with the ranger were able to be part in their release back into the open sea. This was just the first of many times that I cried tears of both joy and sadness on that trip. I was elated at being able to watch these tiny creatures being freed into the sea to begin their journeys but I was also afraid for them and what they may encounter in their future. 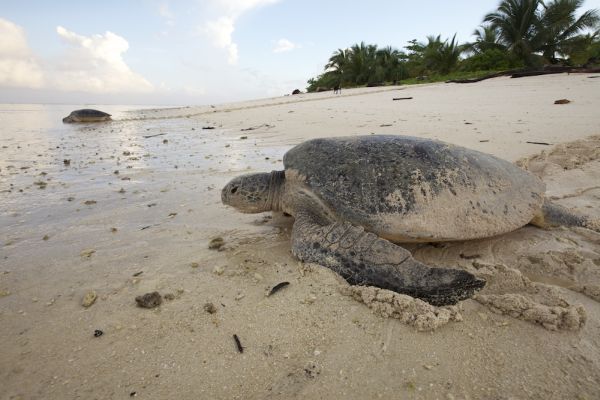 It is a well known fact that… adult sea turtles will probably never meet their young. Once the eggs are laid the resulting young are left to fend for themselves. This has caused serious problems for the population of many sea turtles including the green sea turtle and Hawksbill. The nests are threatened by both humans and animals alike,  the eggs are in threat of being harvested for sale by poachers or hunted by predators. Habitat loss is also a factor, Selingaan is one of  only a few beaches that is completely protected, meaning it cannot be used for human development and tourists are banned from using the beach except when escorted by a ranger.

The Next highlight of my trip had to be my visit to Sepilok Orangutan Sanctuary. If I am being honest this was what I had come for and I was not disappointed. The centre was founded in 1964 to rehabilitate orphaned Orangutans, today there are around 60 wild orangutans living in the centre which spans 43 sq km of protected land at the edge of Kabili Sepilok Forest Reserve. There are also around 25 young orphaned orangutans being housed in the nurseries, in addition to those free in the reserve. The centre provides medical care for not just orangutans, but other wildlife including bears, gibbons, Sumatran rhinos and the occasional injured elephant to name just a few.

The centre has done a great job of educating visitors on the threats to Orangutans and the many other wildlife in the Bornean rainforest. The best part of the visit however was the chance to view the great apes being feed on their feeding platforms high in the jungles canopies. As I sat and watched the animals making their way through buckets of fruit and veg I thought back to that newspaper clipping and how despite being rescued these were likely to be the lucky ones. These Orangutans would never have to worry about lack of food or the threat of being killed so that their babies can be poached and be sold as a pet or worse illegal bushmeat. 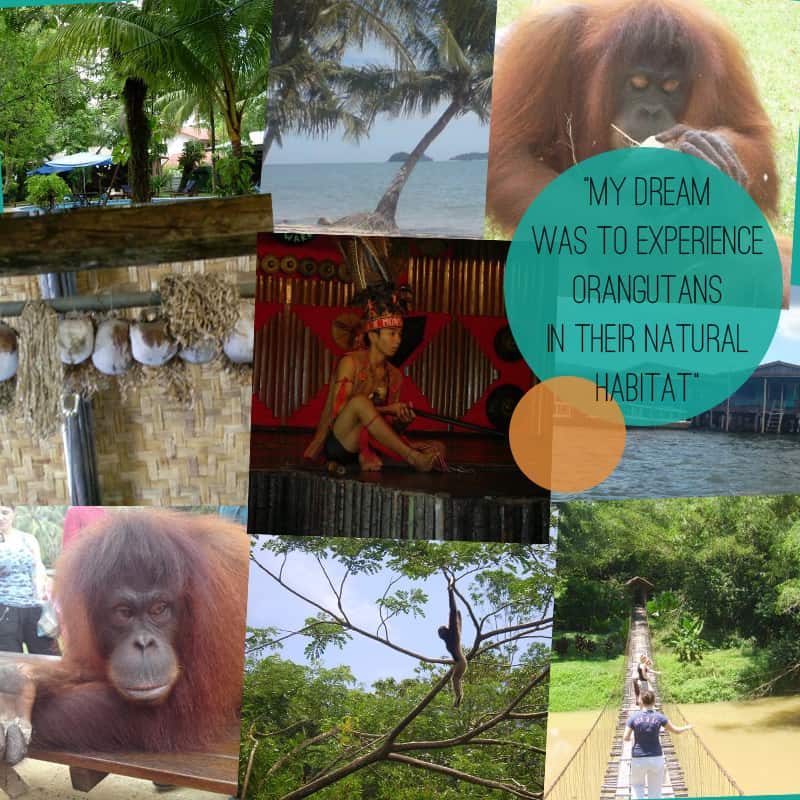 My visit to Sepilok although amazing, encouraged my passion further to see an Orangutan in the wild and it was the next leg of our tour which might see my dream come true. We embarked on a three day trip to Sandakan where we stayed at the Kinabatangan Riverside Lodge. This place was phenomenal, although the rooms were very basic, this was all we needed as we were going to spend the next three days in search of wild Orangutans and the elusive Pygmy Elephant.

The first day took us to the Bako National park where we spent the day hiking through forests spying long tailed Macaques, Proboscis Monkeys and the famous giant Rafflesia flower. The second day took us on a trip to the Gomantong caves, a place I have been dying to visit ever since David Attenborough walked up the mountain of dung that can be found inside. The smell of ammonia is putrid but once you have got used to it and the millions of cockroaches climbing all around you, the sight of the cave itself is astounding. There are thousands of bats and swiftlets that call the caves home along with Monitor lizards and the terrifying Scutigera. 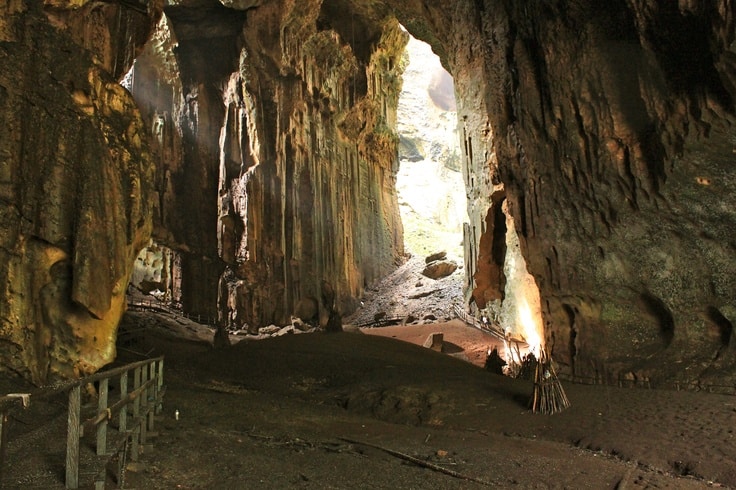 The delicacy in Asia is… edible birds nest soup. Rangers literally put their lives on the line to harvest the nests, living and working in the most awful conditions in order to sell for ridiculously high prices. The nests are made by Swiftlets and are supposedly rich in nutrients, which are traditionally believed to provide health benefits, such as aiding digestion, raising libido, improving the voice, alleviating asthma, improving focus, and an overall benefit to the immune system.

The third day was our last real chance to see an Orangutan in the wild and for the first time I was beginning to think it was near impossible, we had not even heard of a sighting in the last two days. The third day started like every other we gathered for breakfast all sitting in silence exhausted from the travelling and heat. The sound of silence was suddenly broken by the sound of a pygmy elephant trumpeting in the distance. I will never forget that sound, it took me a little while to realise that it was in fact a real live elephant in the wild and not something I was watching on the TV from the comfort of my own home. It took a couple of seconds for everyone to register the sound, then once it had sank we were up on our feet with our guide heading straight out into the jungle. We trekked for a couple of hours but all we could find as evidence of its existence was dung.  It just goes to show despite their size they are very good and being elusive.

The rest of that day was going to be devoted to one last attempt at finding a wild Orangutan. Our spirits were low as earlier that morning we had been unable to spot an animal as large as an elephant, how was we ever going to spot an Orangutan in the dense forest canopy. We changed tactic and headed down the Kinabatangan River as our guide had got word that the Pygmy elephants had been spotted downriver. On the way down a boat stopped to chat to our guide about something he had seen. We could sense some excitement between the two men which could only mean one thing, we were hot on the tail of the elephants. We travelled a little further downstream when the guide stopped the boat and turned the engines off. We all sat in silence as he looked up at the canopy with his binoculars. And there it was, a flash of red in the trees, then again, and before we knew it right in front of our very eyes there was a female swinging through the trees. I honestly couldn’t believe my eyes she was just sat peacefully in the canopy feeding off the fruits and leaves. I was overwhelmed with joy, I had fulfilled one of my lifetime dreams at 22. We sat there and watched for a few more minutes until she disappeared into the canopy. That experience is so up there on my lifetime achievements, I will never forget it! And we never did find those pesky Pygmy elephants! 😉 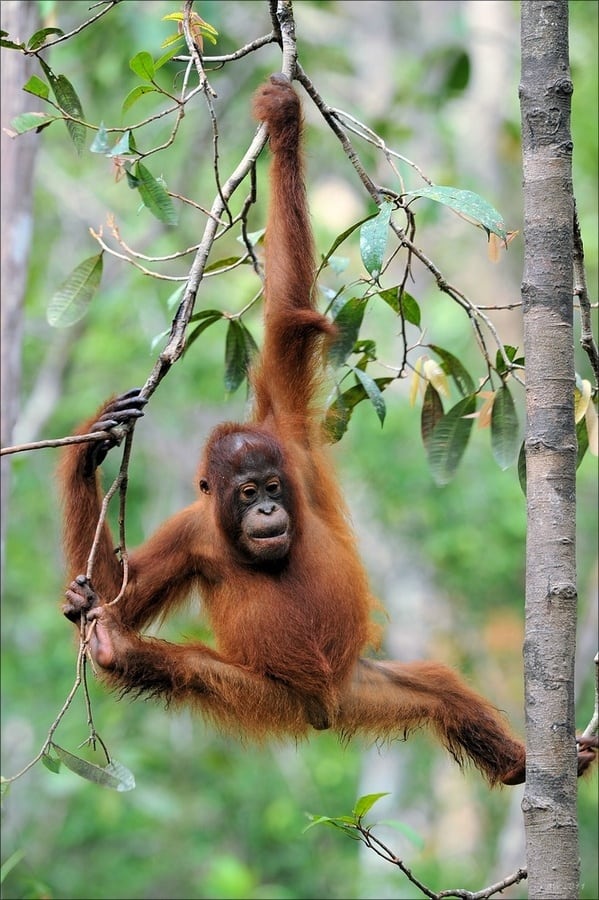 When I visit Borneo again I will… climb Mount Kinabalu!

Five other things to do in Borneo:

3. Go snorkelling on the beaches of Sipidan

5. Take a trip to the night market for souvenir bargains

Thank you for taking a couple of hours to read my travel feature today, I can only hope it will inspire you to visit this beautiful country and all the awesomeness it has to offer.

I would love to hear your thoughts and experiences.