A Dark Horroresque Engagement Shoot Dusted With a Love of Nature 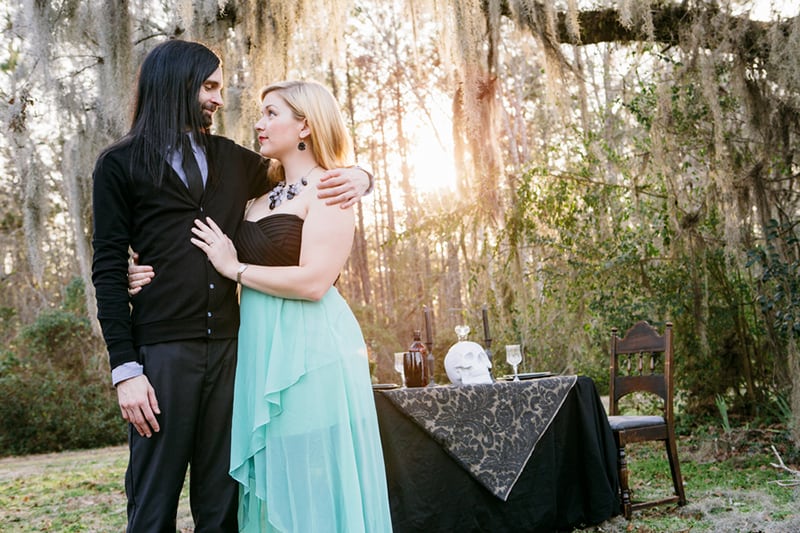 A Dark Horroresque Engagement Shoot Dusted With a Love of Nature

“How can I explain the power of fate in the meeting of Randy? Randy and I met in April of 2012 but neither of us knew the importance of the moment at the time. My mother needed me to take her laptop by Geek Squad in Summerville to get checked out and Randy just so happened to be the guy that helped me. We talked about music and our “small talk” began because The Foo Fighters were playing “The Best of You” on the TV in the store. He and I spoke about how it was so overplayed that the awesomeness of it was sadly overlooked. I left, went home, and put the small conversation with Randy out of my head.

4 months later I October of 2012, I walk into Seacoast Church in Summerville and there he is, sitting on the back row by himself. I, being the talker, decided to just go say hello. It took him a few minutes to remember me, but he came around. I asked him to come sit with me in the front and he joined me. He asked for my number and was very persistent. We started hanging out that night when I invited him over to watch Halloween. Two weeks later we were official and in love if you can believe in love that quick. He made me laugh constantly and I had a hard time believing someone could truly make me that happy.

When October came back around in 2013, Randy had planned a trip to Six Flags in Georgia because I love Halloween so much. They were having a special event for the month of October, “Fright Nights”. Anyway, with me being from Arkansas, I am a huge lover of nature and mountains, so Randy and some of our closest friends took me to Amicalola Falls in Georgia. And it was there that Randy asked me, at the bottom of the waterfall, if I would marry him. We celebrated in Helen, Georgia. I could tell that he was really nervous, but he will probably deny that if you ask him.

I am such a lover of all things Halloween, October, dark, and horroresque, so our engagement shoot was a mixture of my love for nature and our mutual interest in fun, dark things. The skull on the table was the fabulous Jeanne’s idea. She’s pretty awesome I might say. We are what you would call opposites and things just work best that way. He is the Yin to my Yang. It is a sun and moon kind of relationship and it’s a beautiful kind of love I have never experienced. We will be honeymooning in D.C. so that I can audition for The Voice on June 8th, wish me luck.”