HOW TO CELEBRATE DAY OF THE DEAD IN MEXICO CITY

HOW TO CELEBRATE DAY OF THE DEAD IN MEXICO CITY 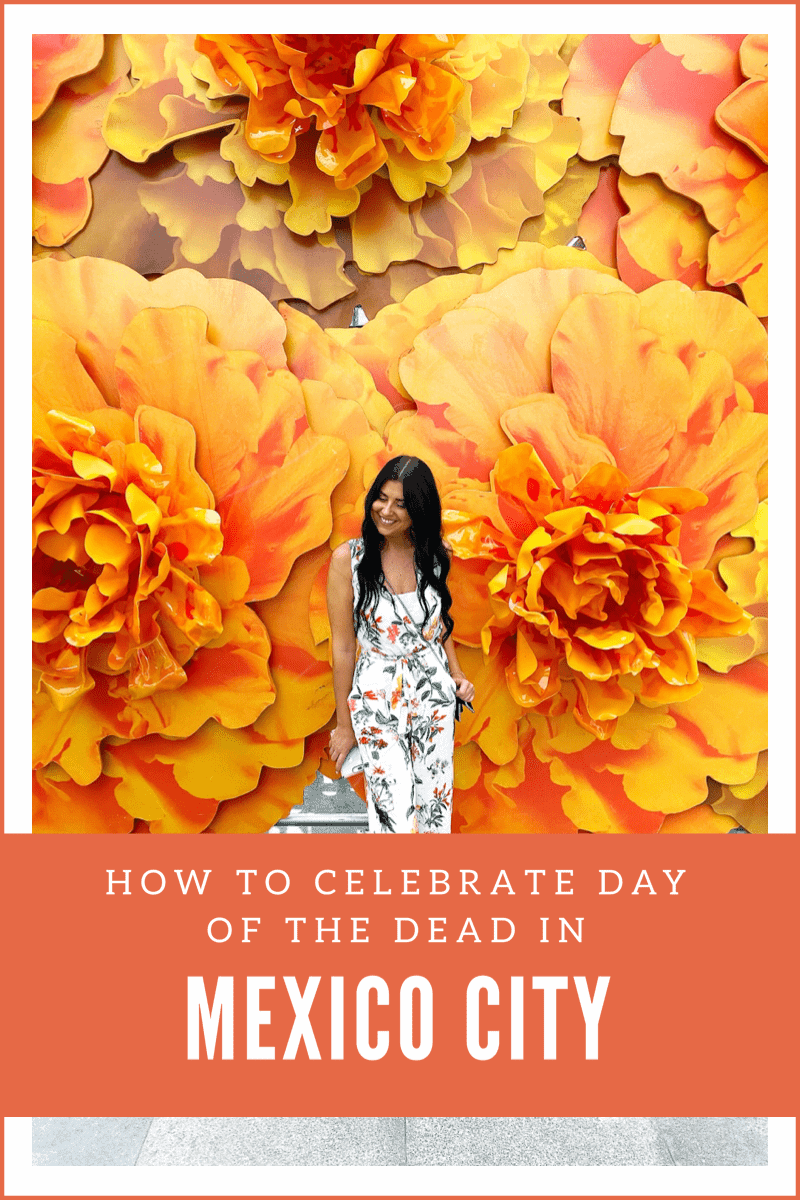 I’ve been to Mexico many times before but never have I been here for the Dia De Los Muertos celebrations and to say I was excited would be an understatement! But where to celebrate this occasion? Should I stay in Cancun and go to Xcaret’s festival? Or head to Oaxaca and experience the holiday on a more ‘local scale? In the end I settled on Mexico City, the capital of Mexico and one of the most creative cities I’ve ever had the pleasure to visit and let me tell you, it did not disappoint! If you’re heading to Mexico City to celebrate Day Of The Dead then here are the places and experiences I recommend adding to your to-do list immediately! 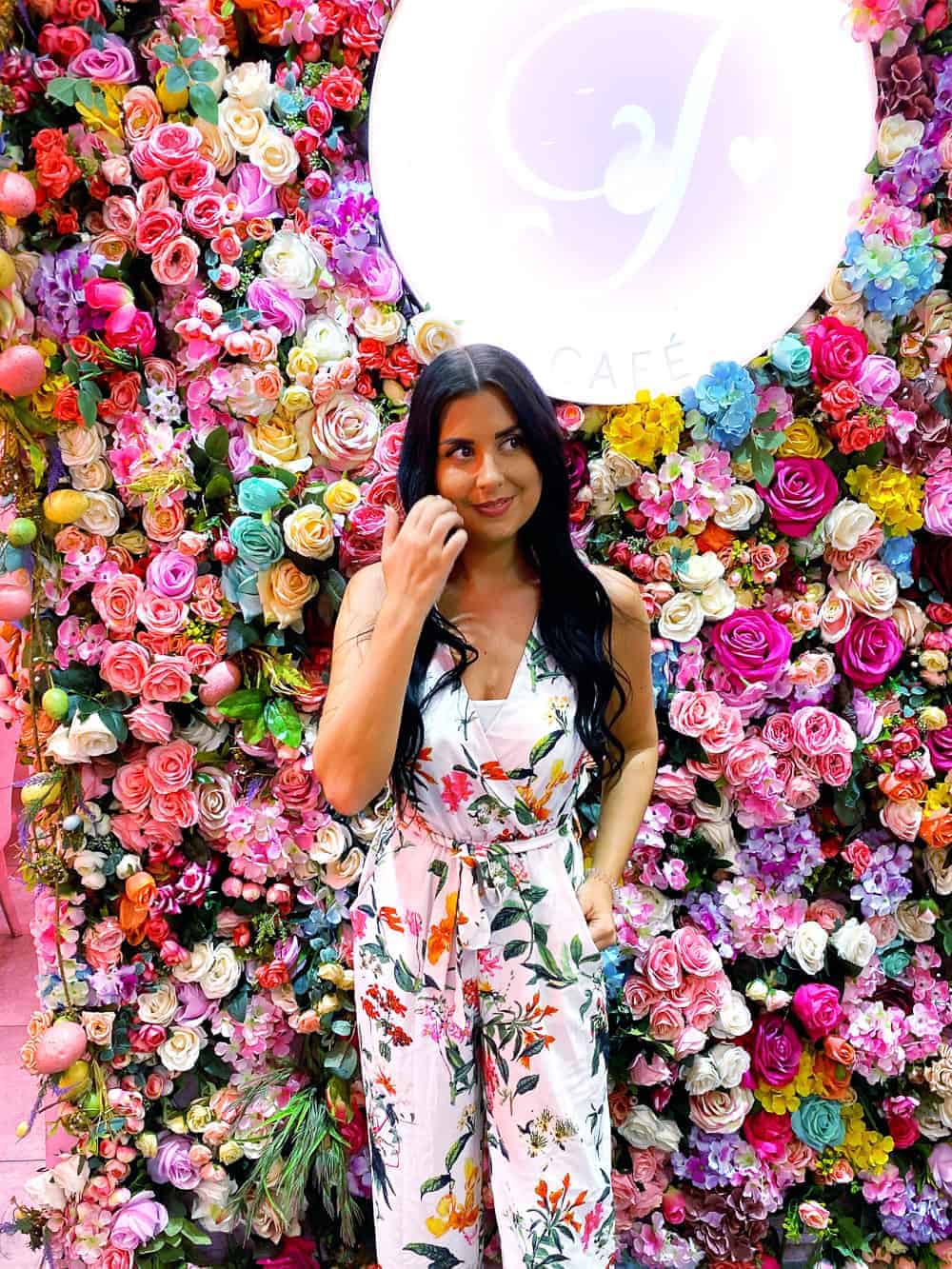 One of my favourite things about Mexico City is just how artistic it is, you only have to walk around the neighbourhoods to be greeted with colourful street art, or visit any of the hundreds of museums that the city holds to realise the incredible culture of this country. Every year in the lead up to day of the dead you’ll see Paseo De Reforma (this is the main street of the city) transformed into a free exhibition filled with colourful sculpture from national and international artists.

At one end (closest to Chapultepec park) you have the alibrejes, alibrejes are spirit guides originally created by Pedro Linares Lopez. One day he fell unconscious due to an illness and, during a long period of deep sleep he claimed to have seen a series of mind-boggling creatures which he later tried to reproduce. Many years later these creatures are celebrated all over Mexico and during the end of October-November you’ll find TONS of huge sculptures of them lining the streets of Reforma, all created by artists in the traditional colourful style! I was so blown away by the details of these and just how imaginative and creative they were! I could have looked at them for ages! 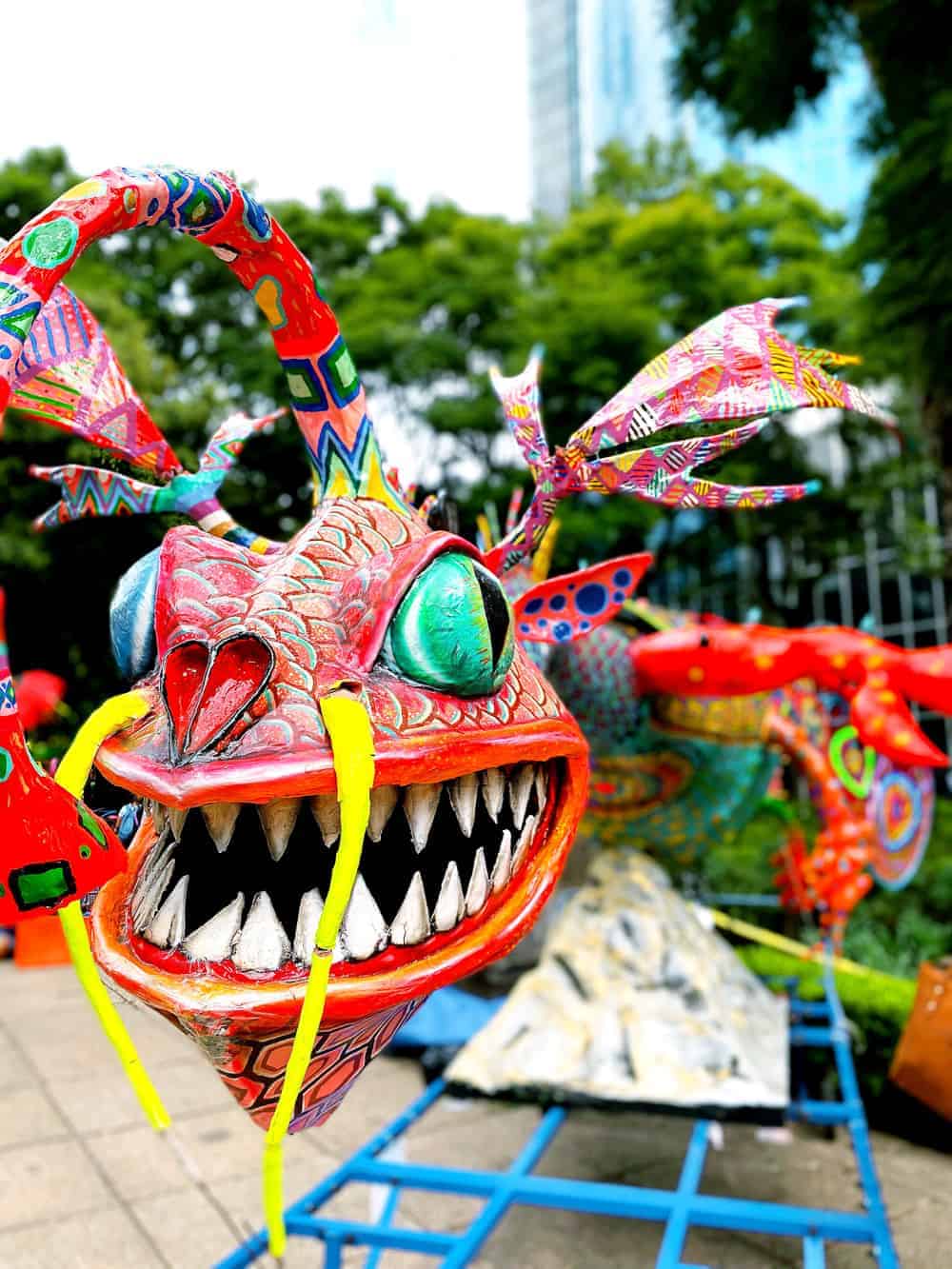 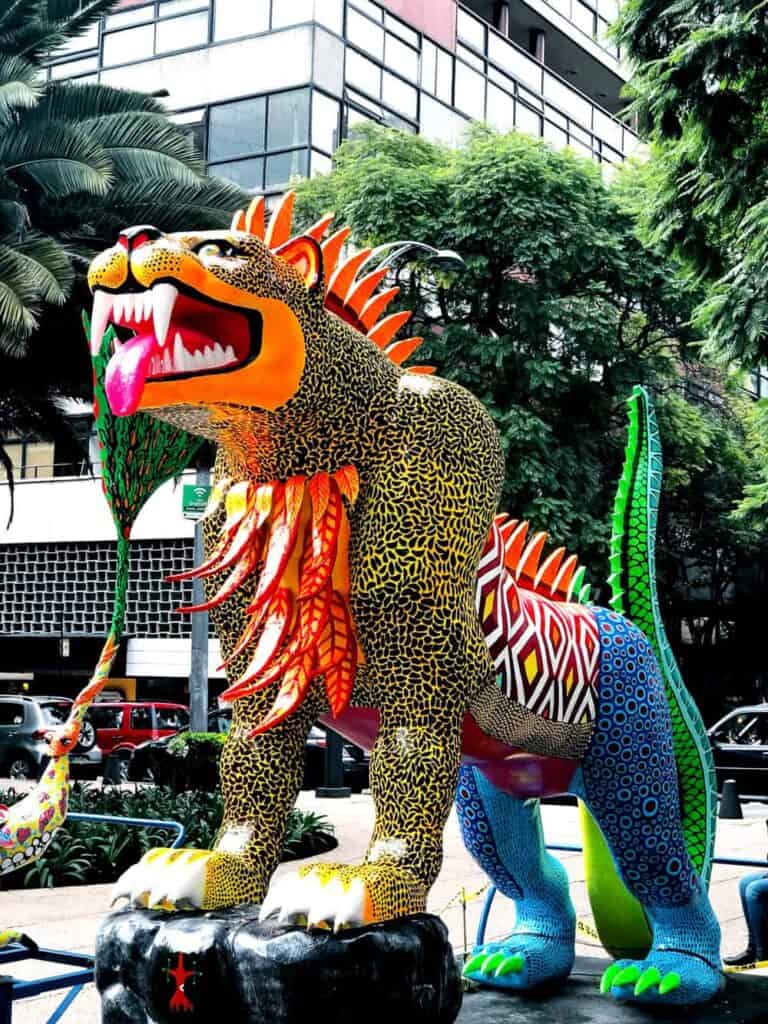 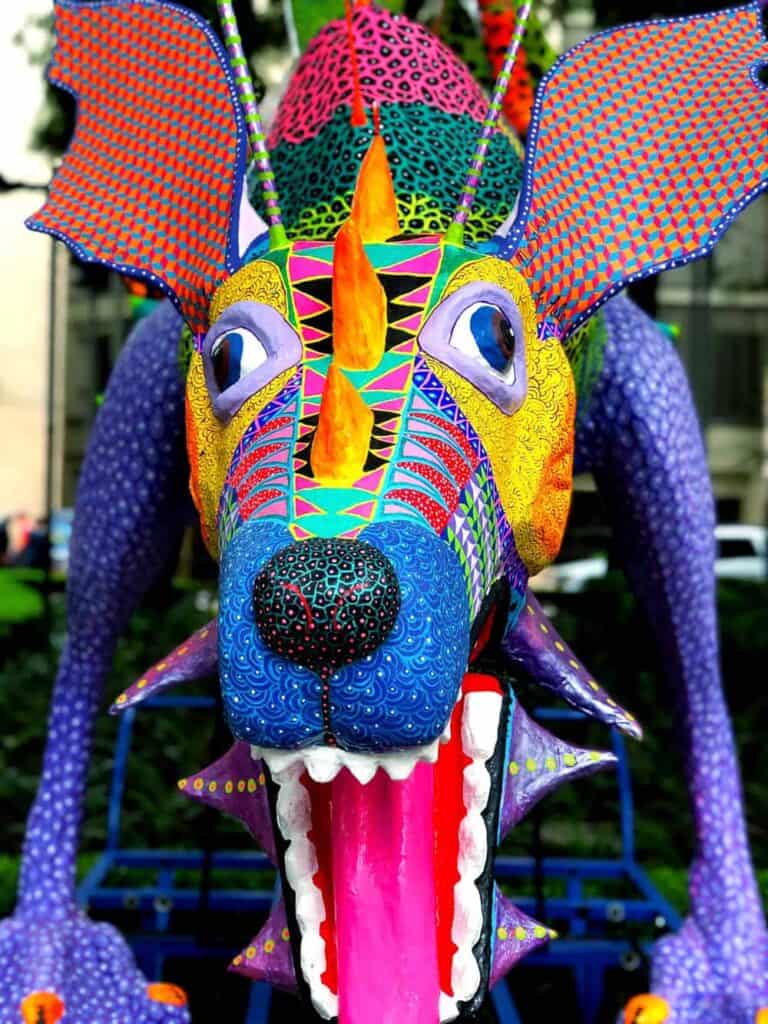 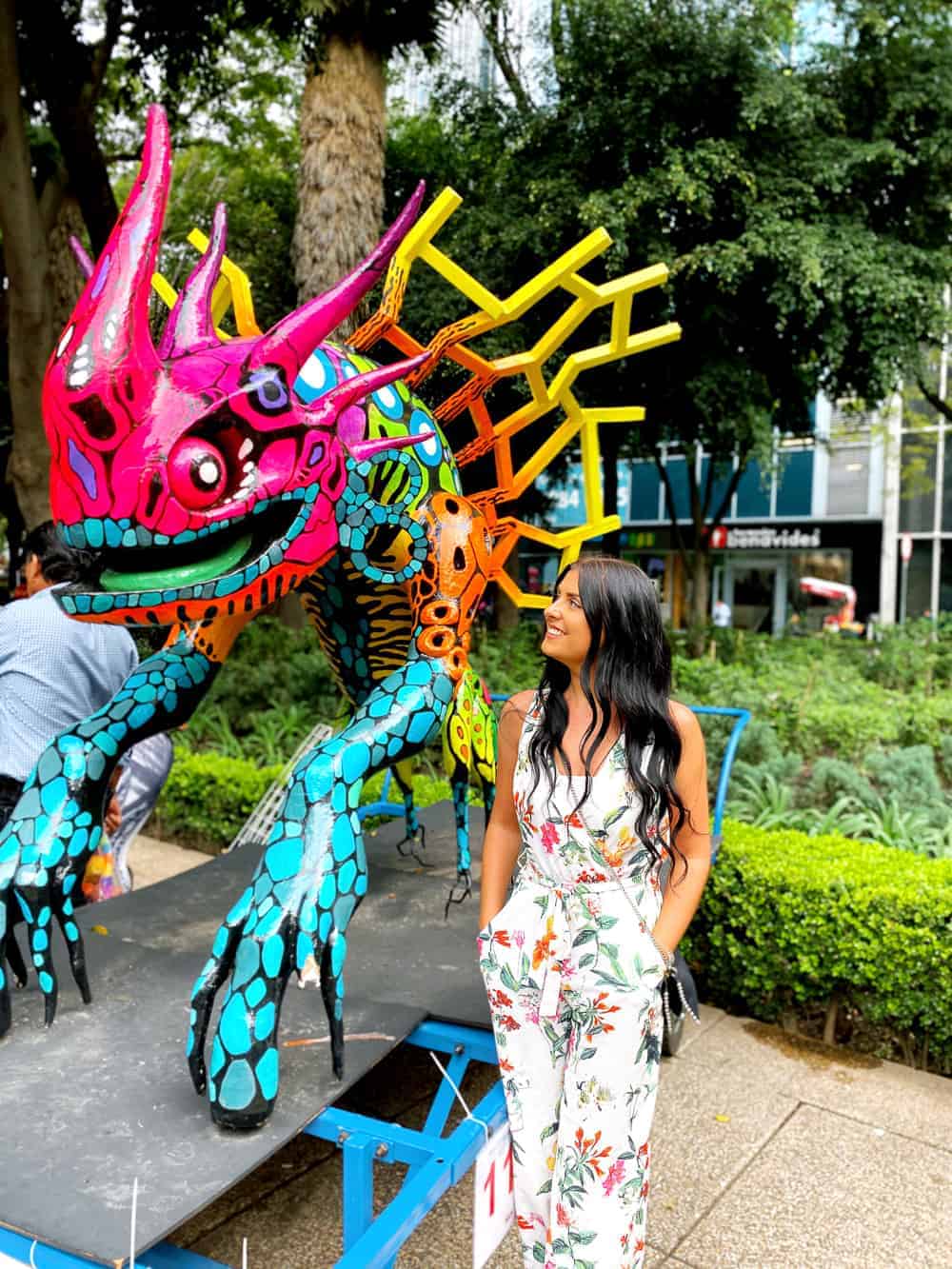 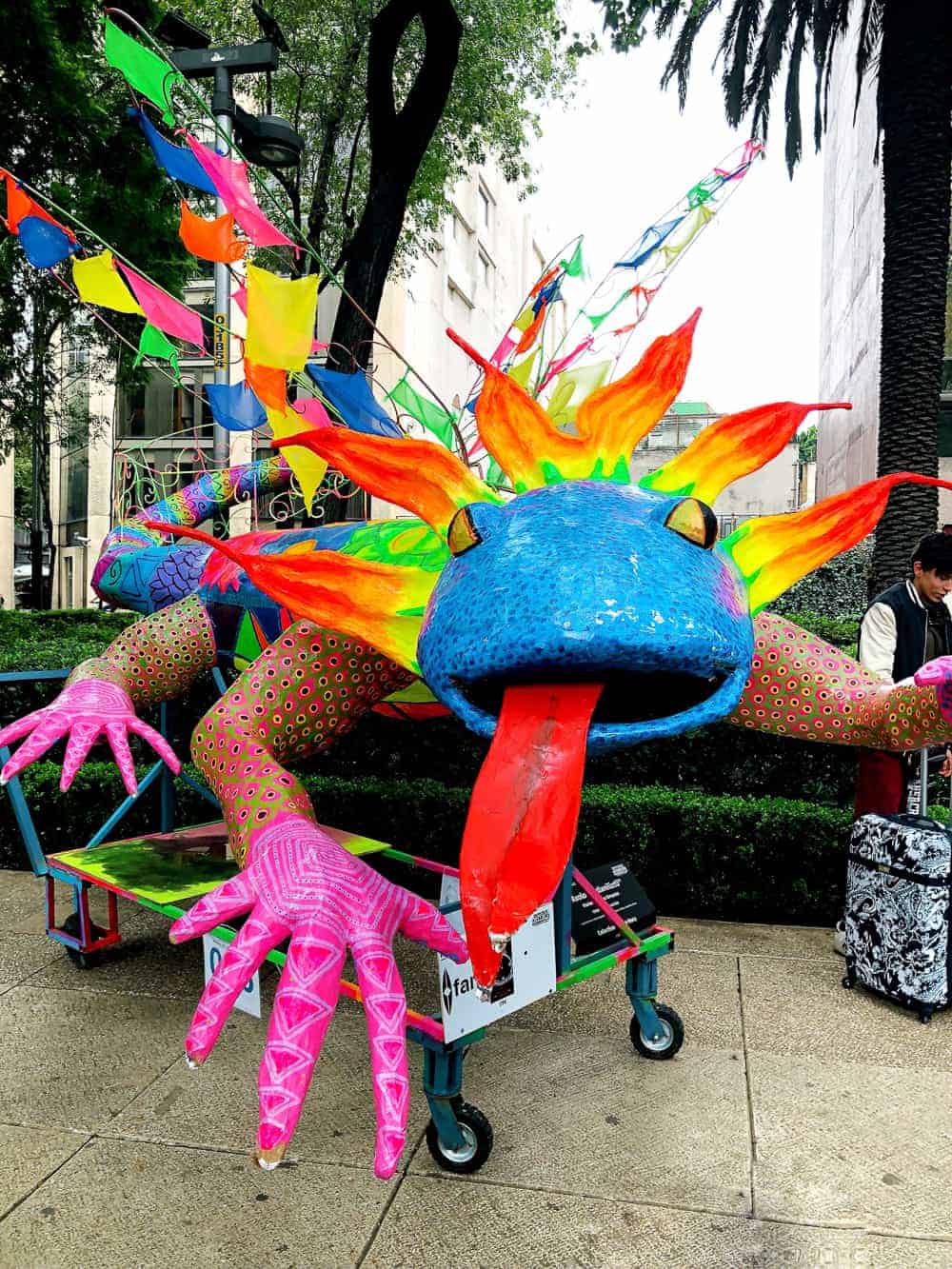 At the other end of Reforma, you’ll find the skulls! Again, created by national and international artists this exhibition is a celebration of day of the dead featuring over 50 different decorated skulls, the skulls are all the same size but the way they are each decorated couldn’t be more different from each other! Take time strolling down the street and check out the incredible detail that goes into decorating these skulls, they truly are beautiful! 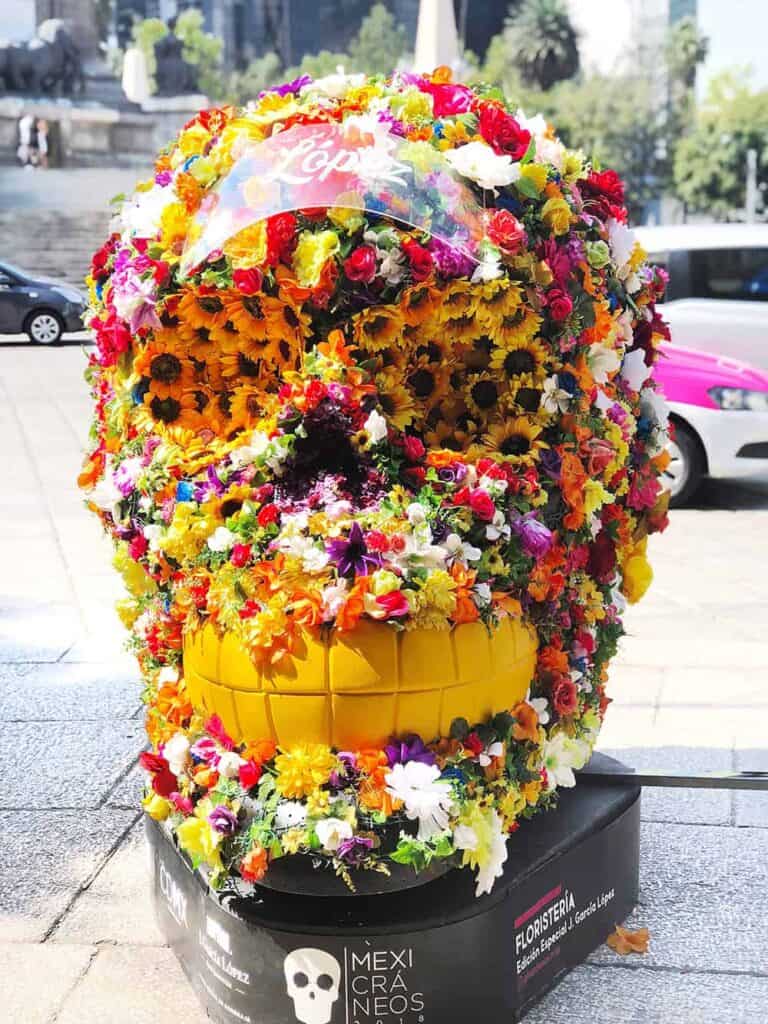 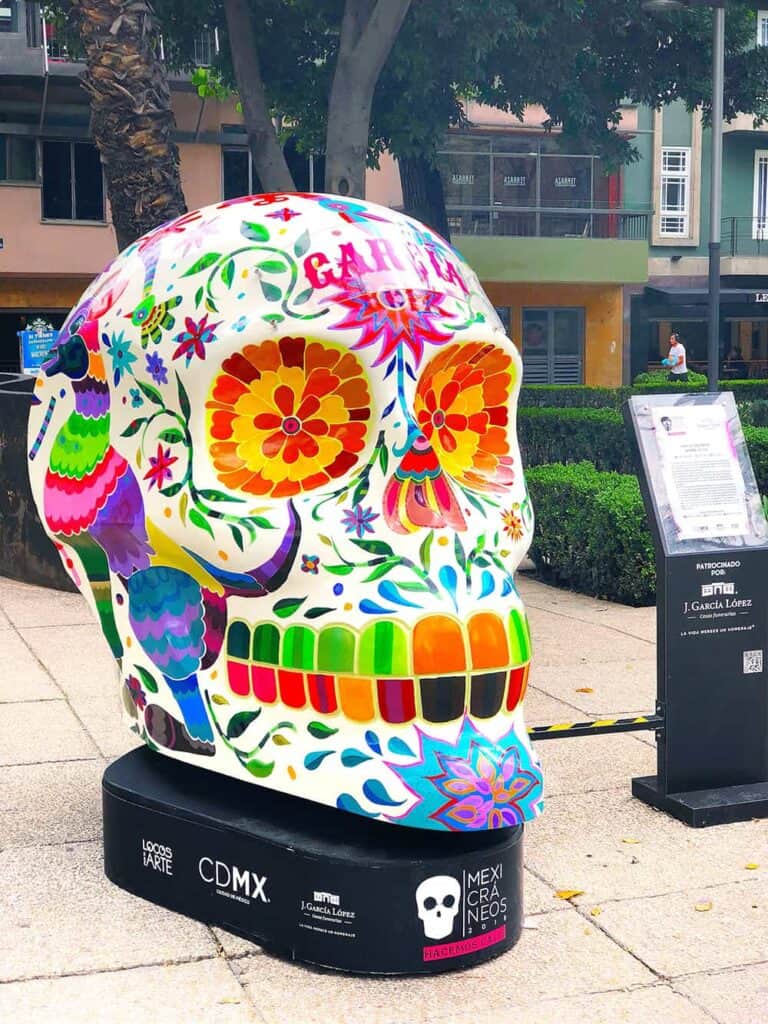 The most famous park in all of Mexico City is of course going to be putting on some sort of celebration for the holiday, we went during the day so we could stroll around and take all of the art in in the daylight, it was amazing to see the huge sculptures of ‘cempasuchitl’ the traditional Day of the dead flower, as well as giant skeleton entrances, costumes, floating altars and more! 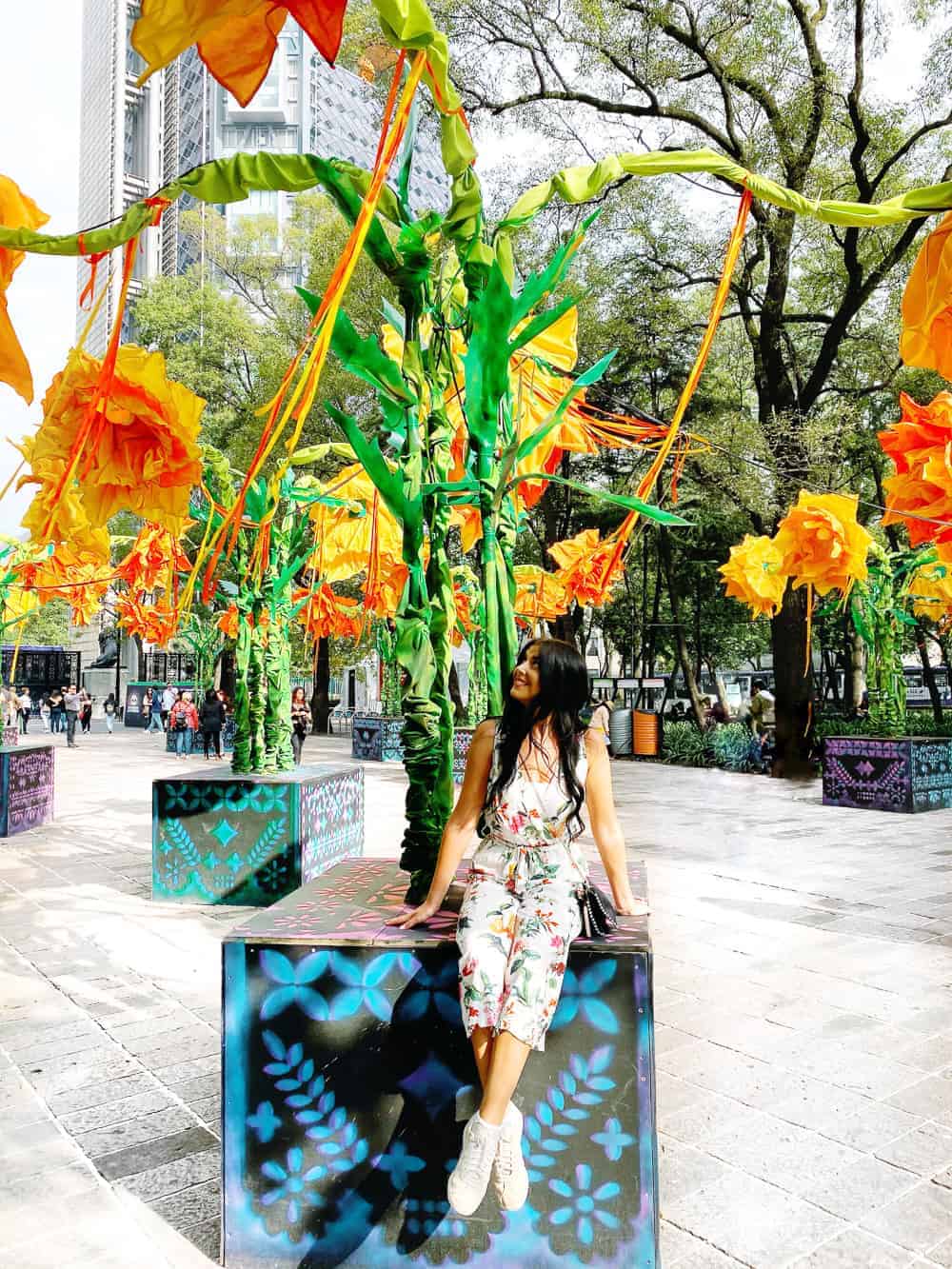 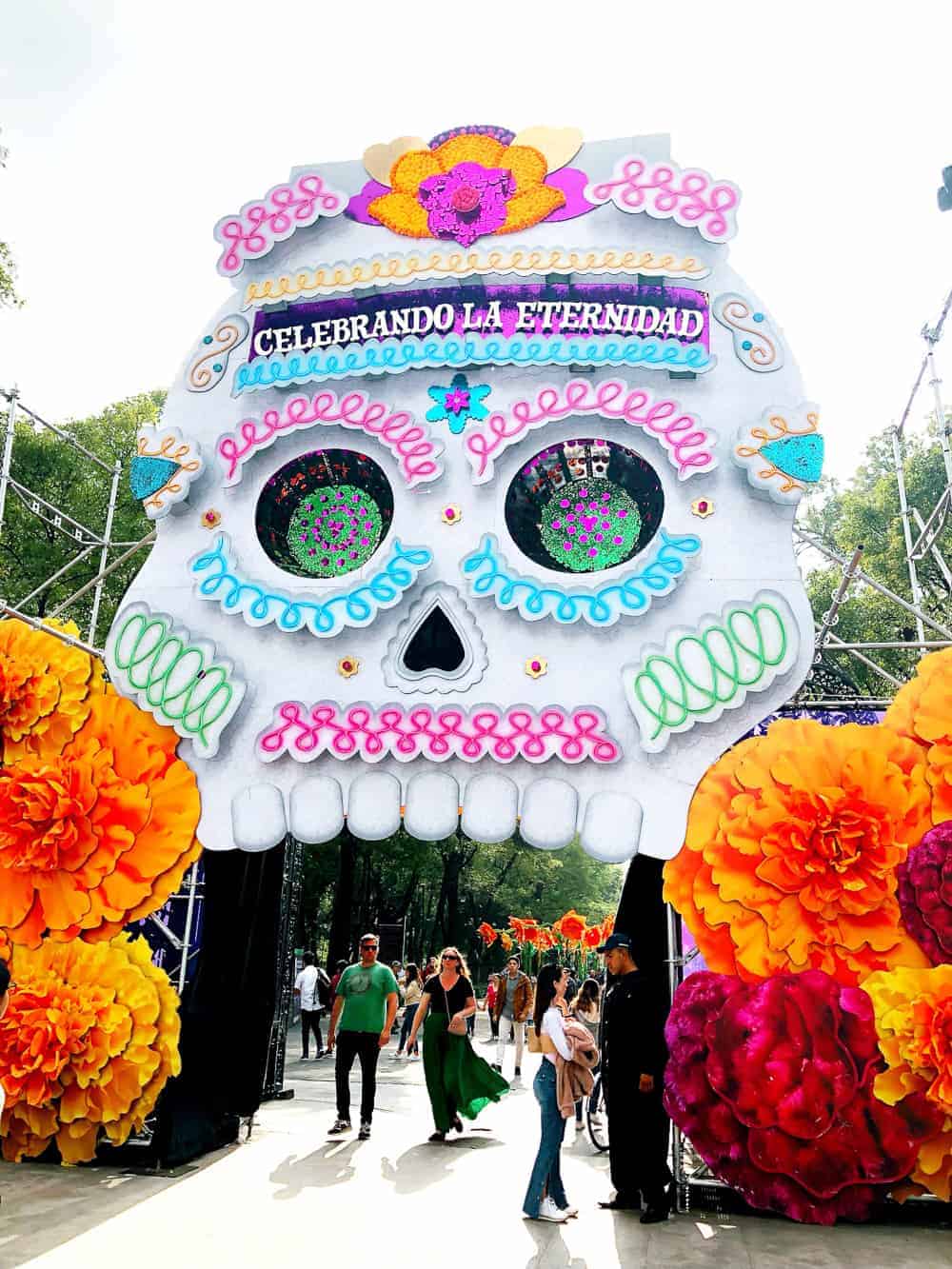 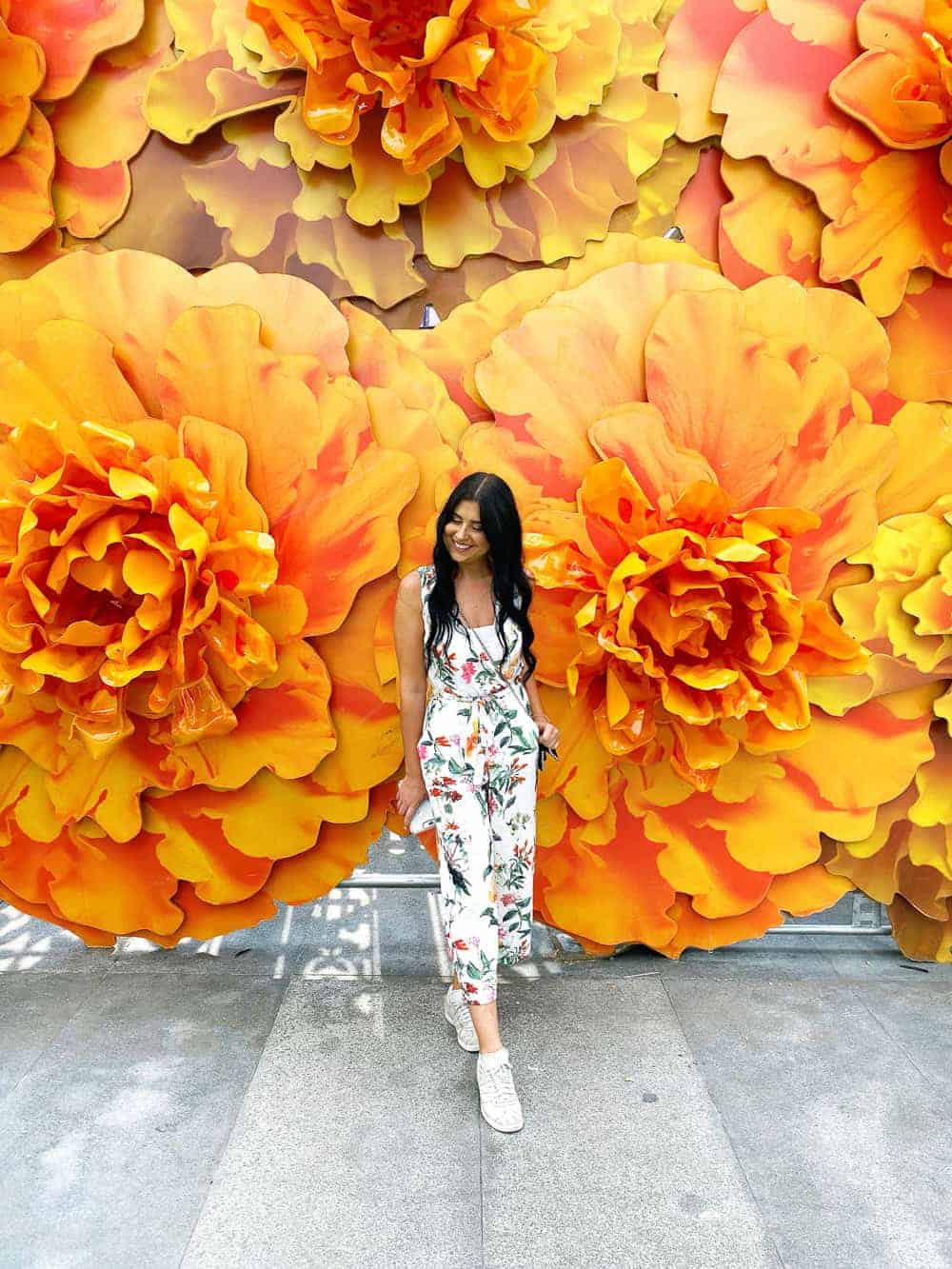 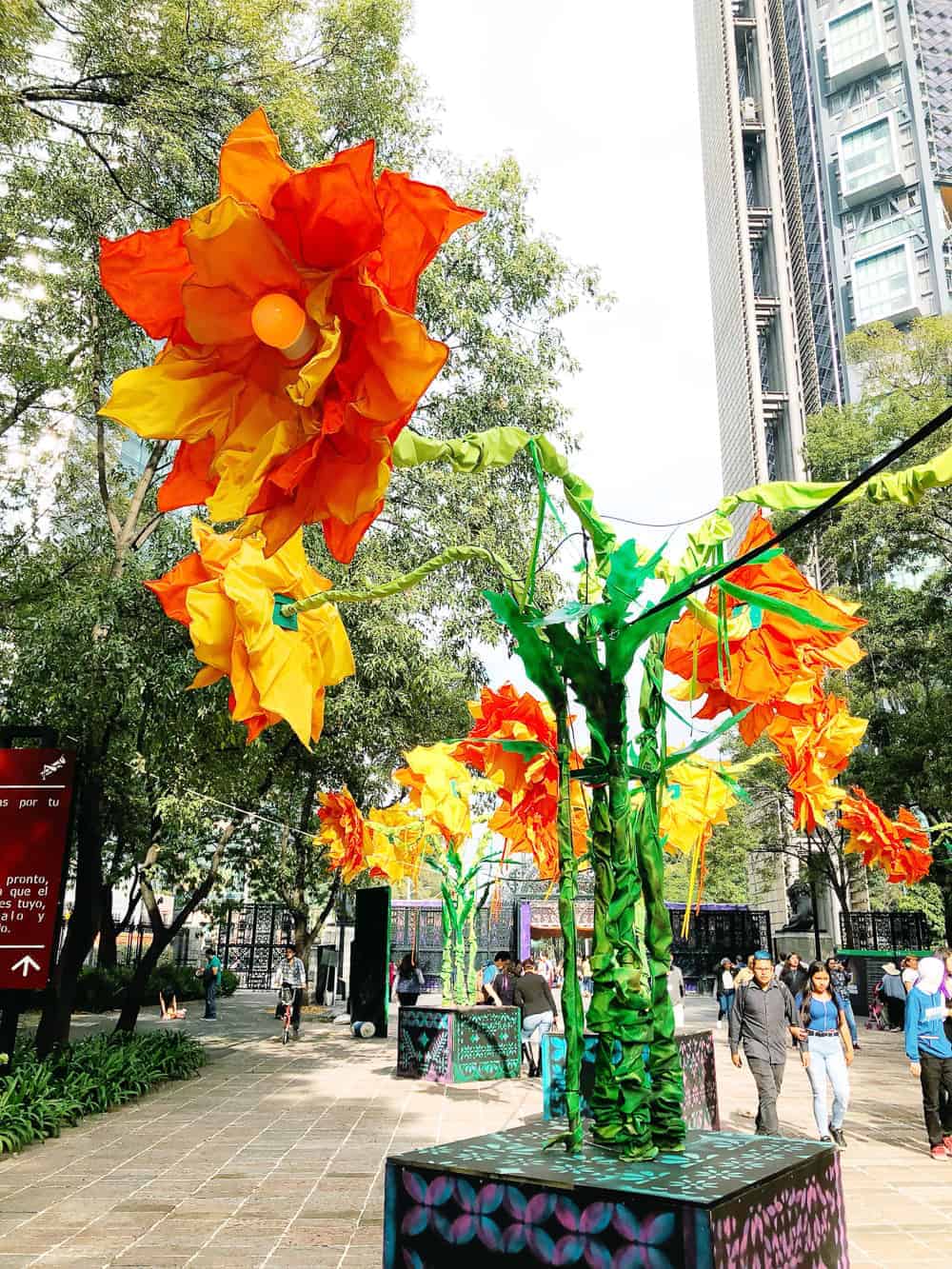 At night they hold an even bigger celebration with a light show on the lake, and ’10 other experiences’ for any who attends! It’s also totally free so go check it out!

If you haven’t heard of pan de muerto before then worry not, because by the end of your trip in Mex City you’ll know what it is! This beautiful bread is baked this time of year as part of the celebration! You’ll see them on the ofrenda’s (the shrine type creations that are made for loved ones that have passed on), at grave sites and of course in cafes all around the city. Family and friends eat pan de muerto as well as the relative’s favourite foods, the bones that you’ll see on top of the bread represent the deceased and there is normally a baked tear drop too to represent goddess Chīmalmā’s tears for the living. The bones are baked in the shape of a circle to portray the circle of life. 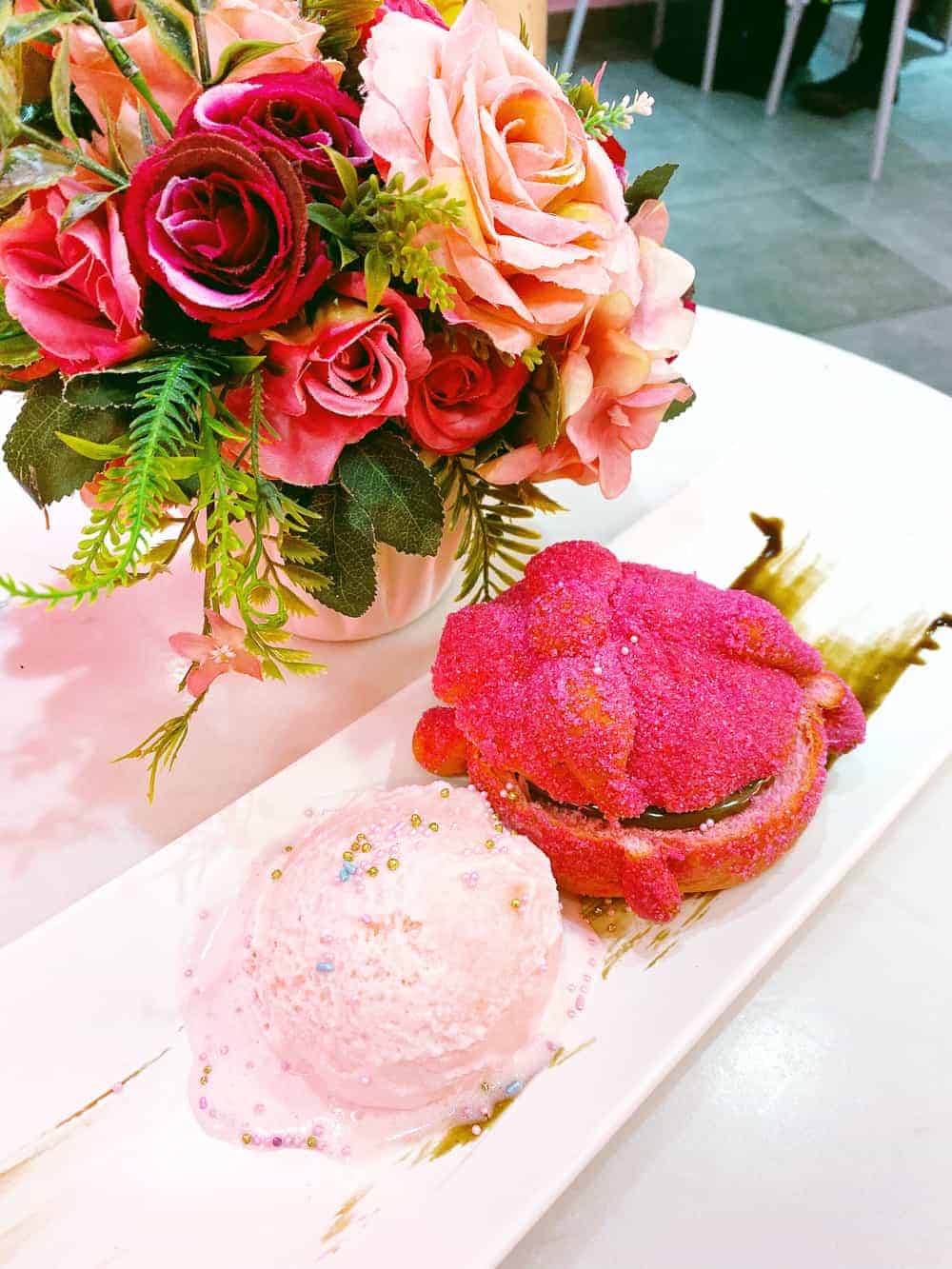 I had the most delicious vegan pan de muerto at Los Loosers (one of the most popular vegan restaurants in the city), it was full of nutmeg and cinnamon and was just absolutely YUM! But if you want to eat non-vegan pan de muerto then you can get it at pretty much any cafe, supermarket or restaurant in the lead up to Day of the dead!

Otherwise known as the main square, the visit to the Zocalo is worth it whether it’s day of the dead or not. This bustling square is full of incredible architecture and really gives you a feel for the city! Leading up to Dia De Muertos the square gets transformed though and every year holds a different theme! 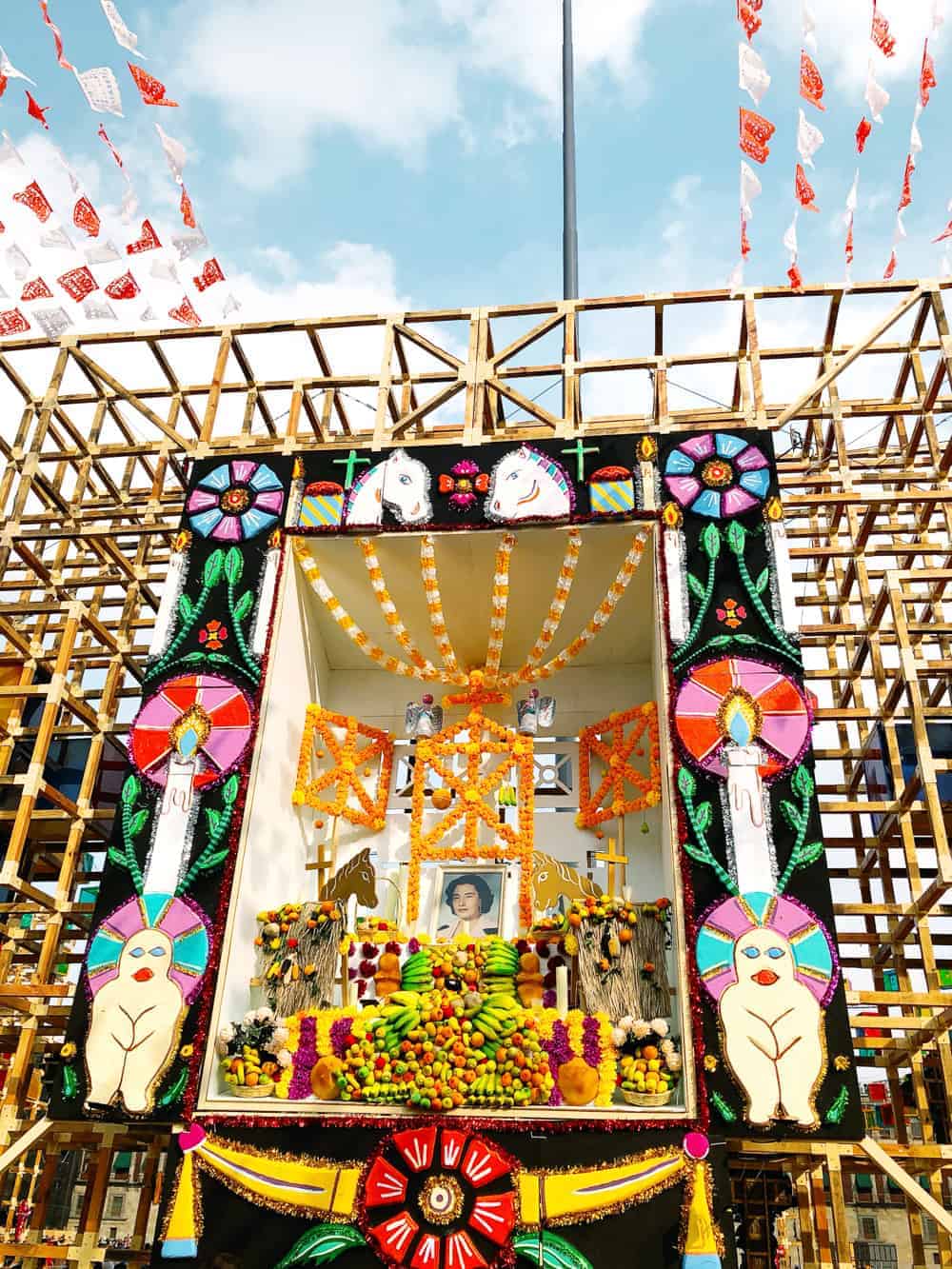 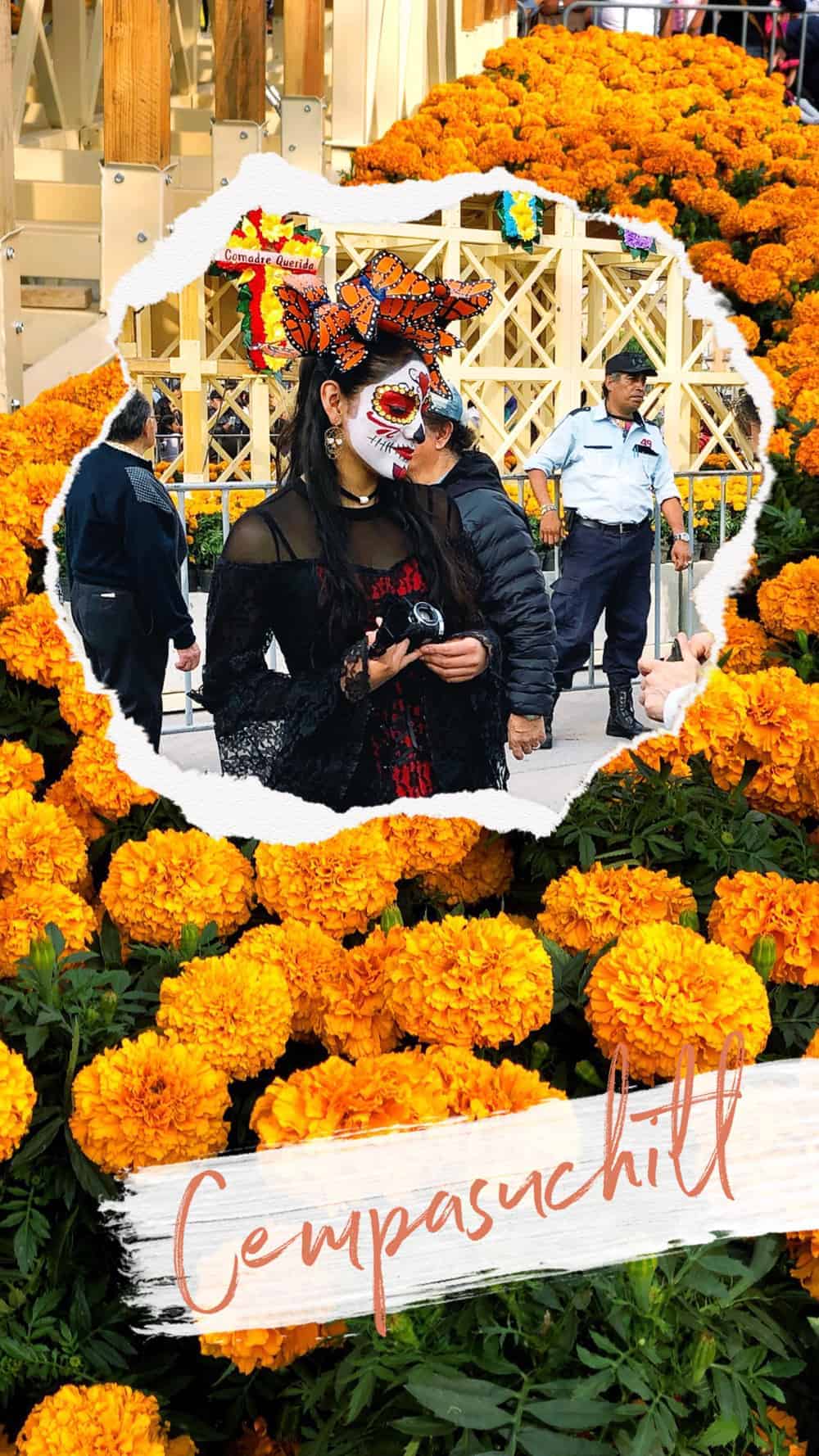 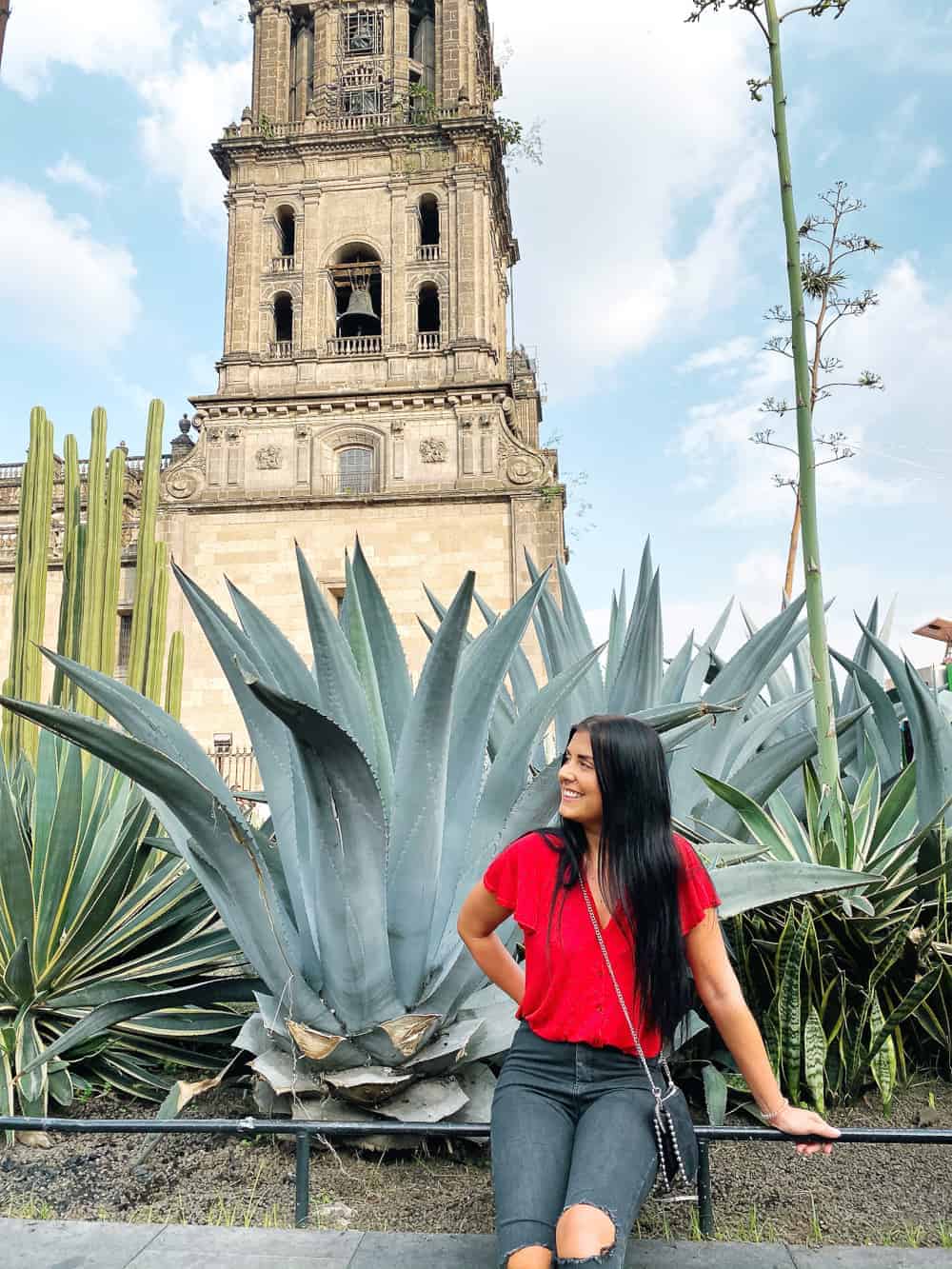 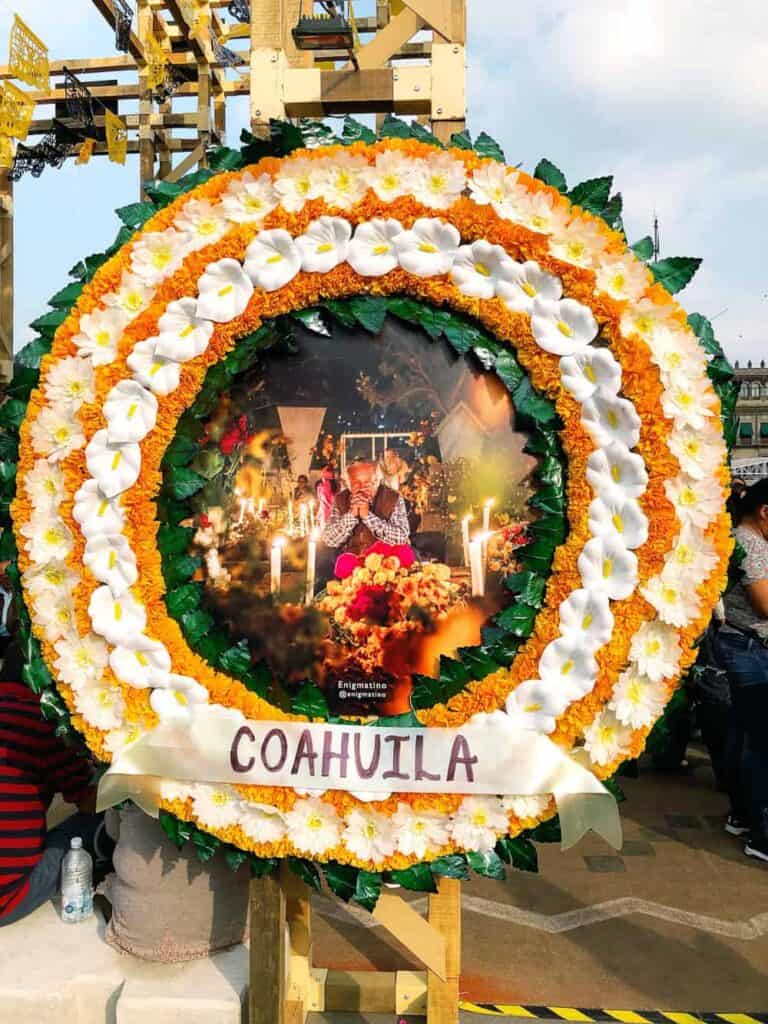 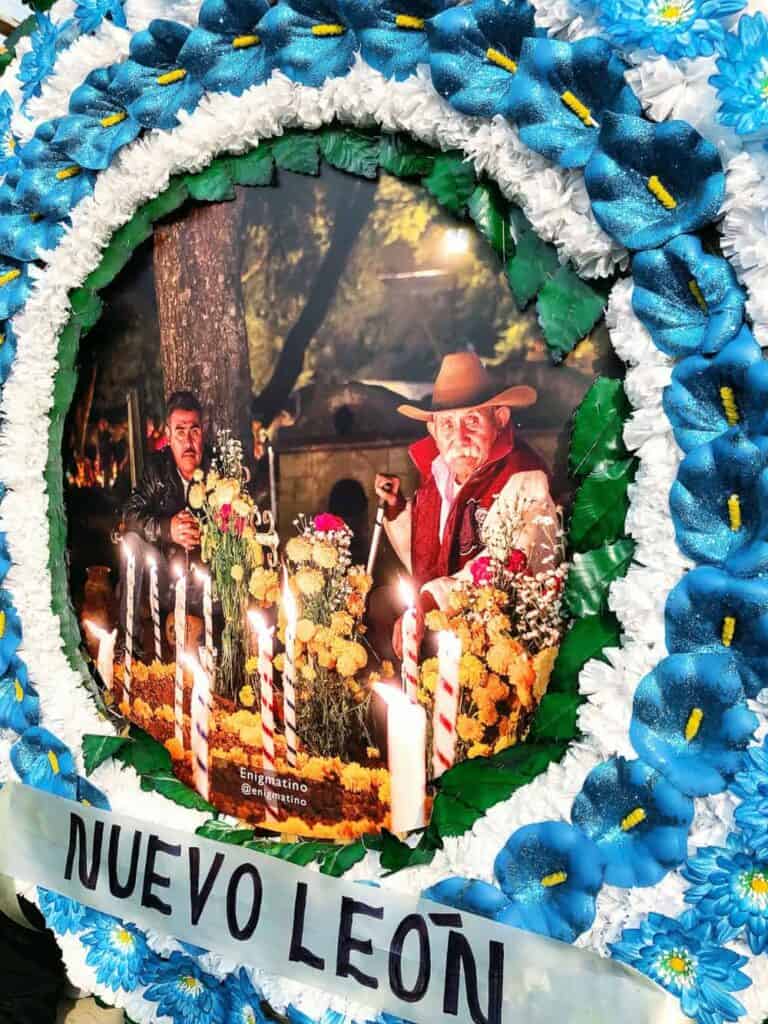 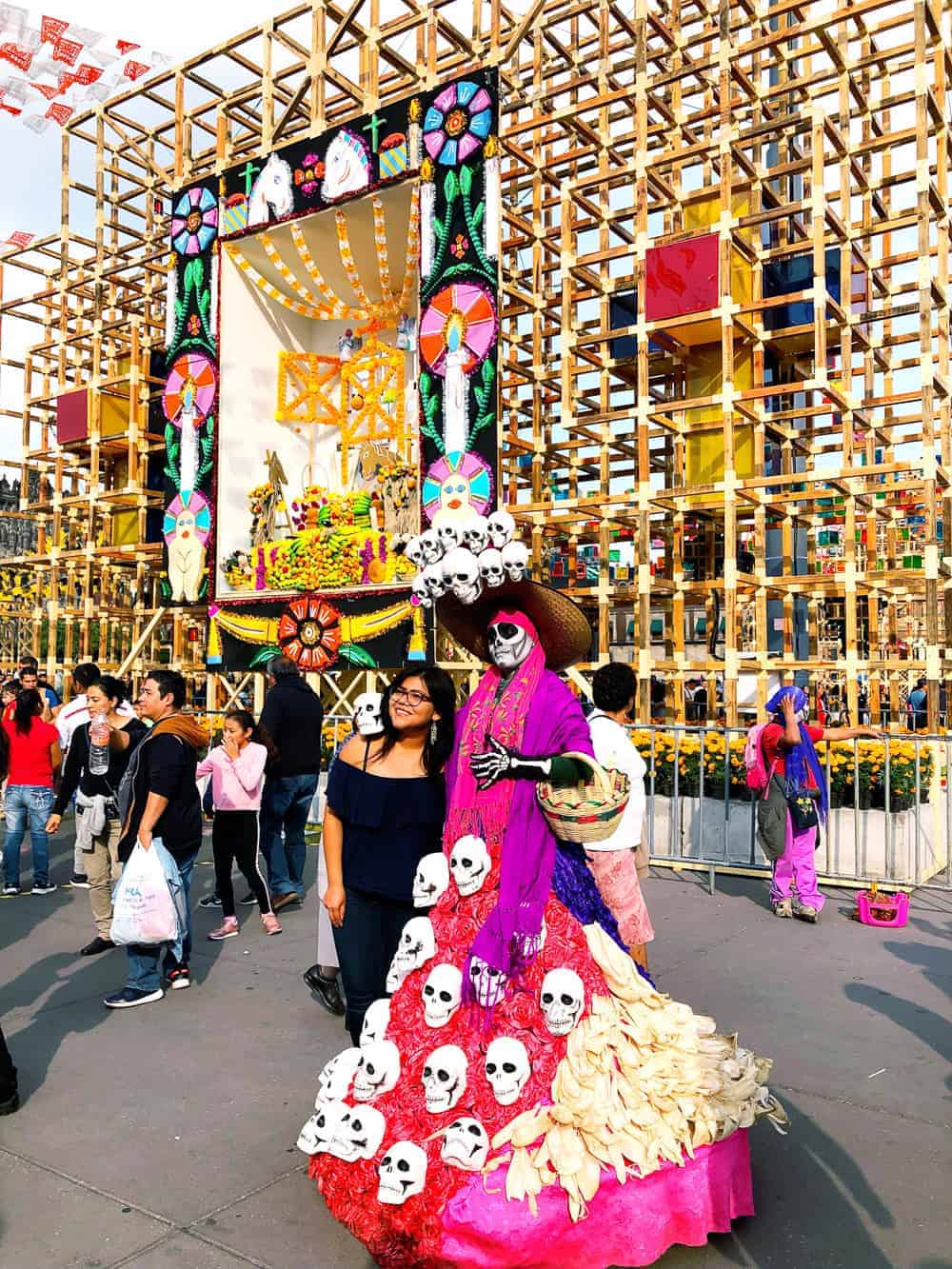 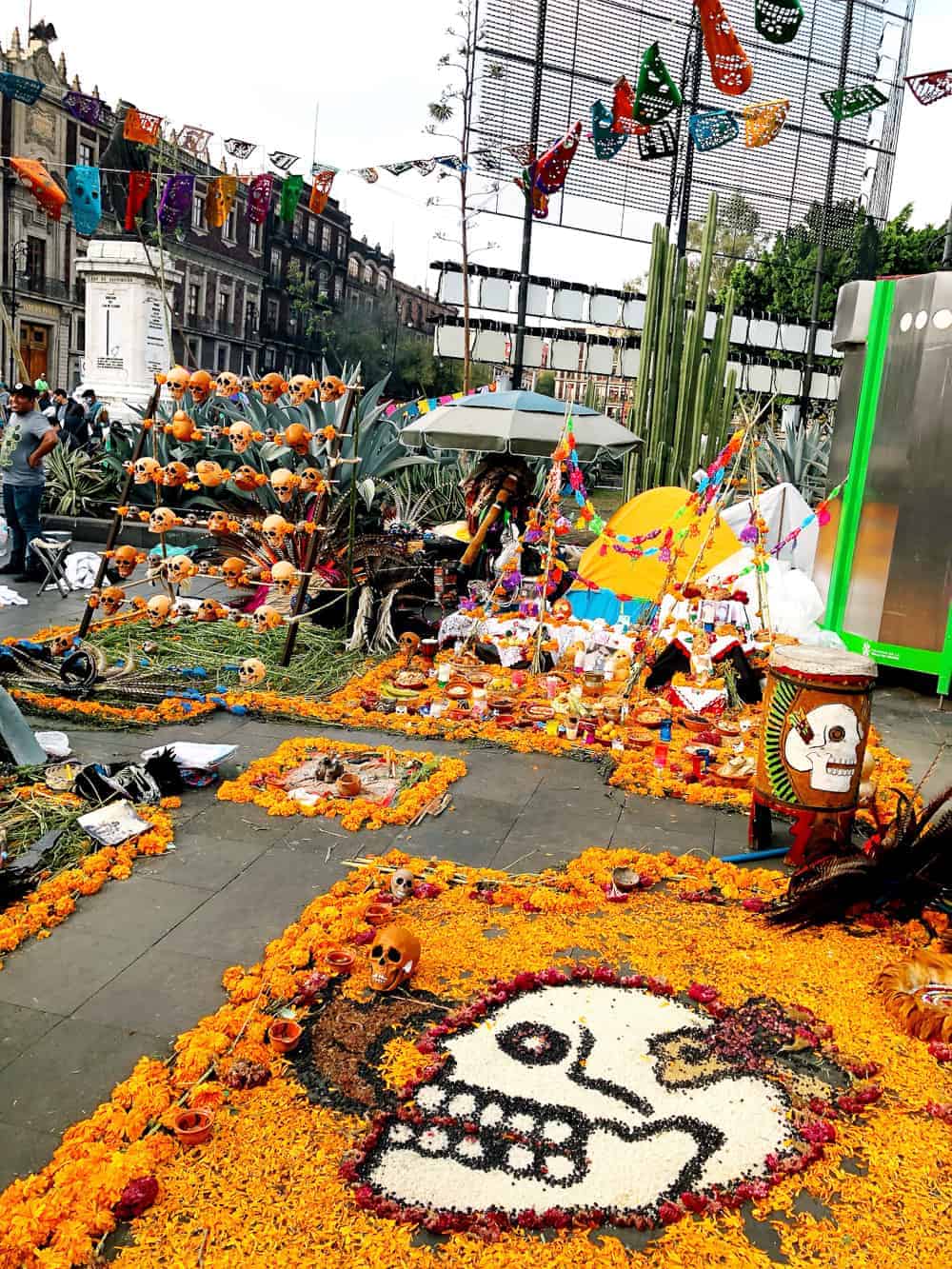 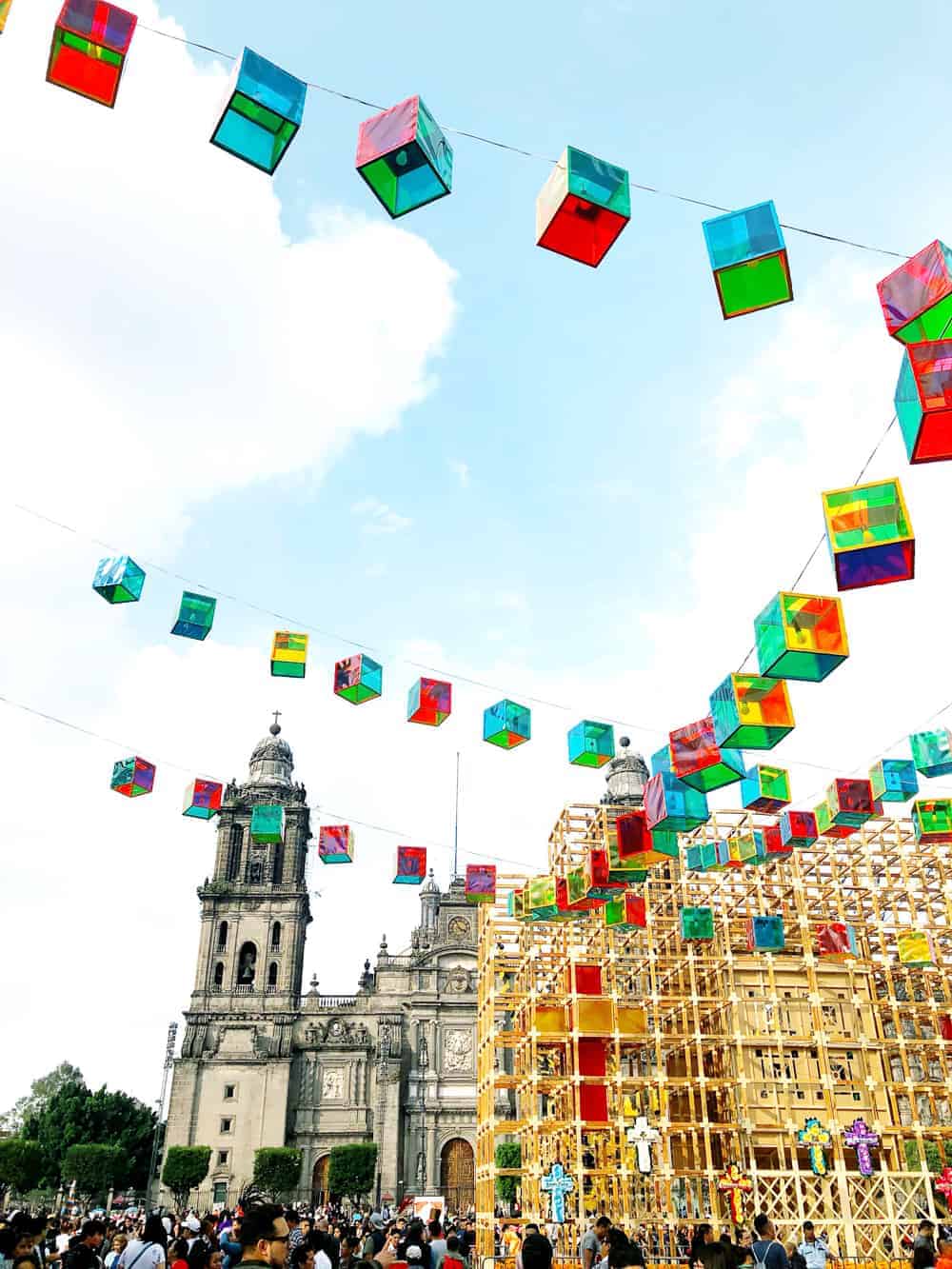 Last year they had an art display that depicted immigrants around the world who have died while trying to seek better opportunity. This year they had an ‘altar of altars’, designed to represent the diversity of Day of the Dead celebrations in the north, south, east and west of the country. It featured HUGE wooden sculptures of ofrenda’s and was just so striking and touching.

Fun fact about the parade….it didn’t actually used to exist a few years ago! Do you guys remember the James Bond film Spectre back in 2016? Well the opening of the film sees James Bond battling his way through this huge Day Of The Dead parade in Mexico City. The whole parade was just put on for part of the film but after it’s release tourists starting visiting the city to see this epic parade! Of course, it didn’t exist, and was just created for the screens but officials decided to make the parade a yearly event from here on out inspired by the movie!

Watching the parade was top of my list this year but sadly the day of the parade I woke up really sick so I had to watch it on Facebook live from the sofa, (can you imagine how miffed I was at this haha). It looked truly beautiful though and is definitely something you should do if you’re in the city for the celebration! The parade takes place down Paseo De Reforma, starting at Chapultepec and ending in the Zocalo. This year it started at 1pm but you’ll want to check online to get the actual schedule for whichever year you are attending! It’s advised to arrive 2 hours earlier than the start time to get yourself a good spot and take a rain coat just in case, it did rain this time.

Head to the other main attractions

I also think that it’s worth a visit to some of Mexico City’s top spots just to see what special display they’ve put on for the occasion, anywhere you stroll in the main areas of the city you’re going to find tons of people dressed up as beautiful catarinas, superheroes, Coco characters, the list goes on! 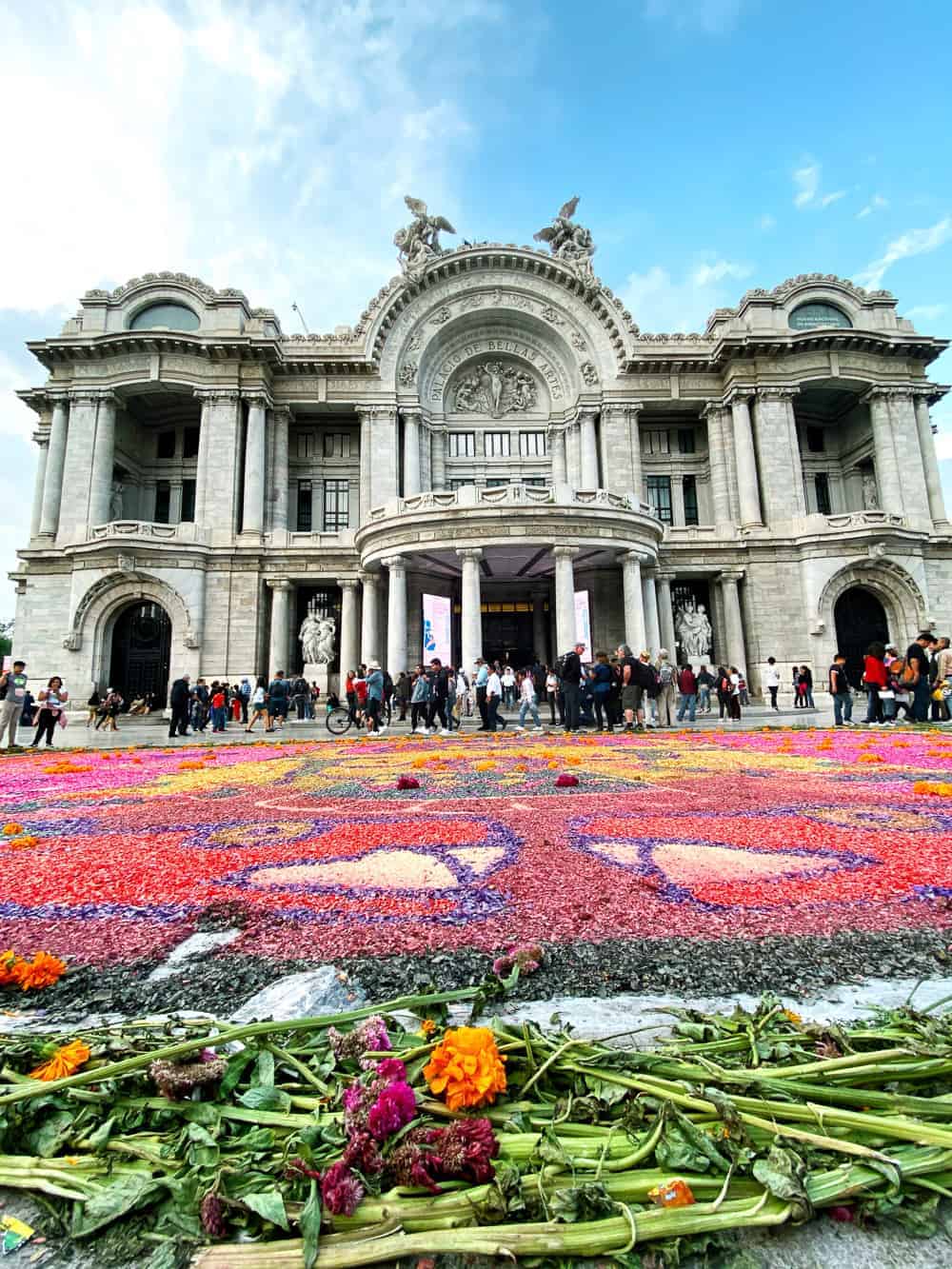 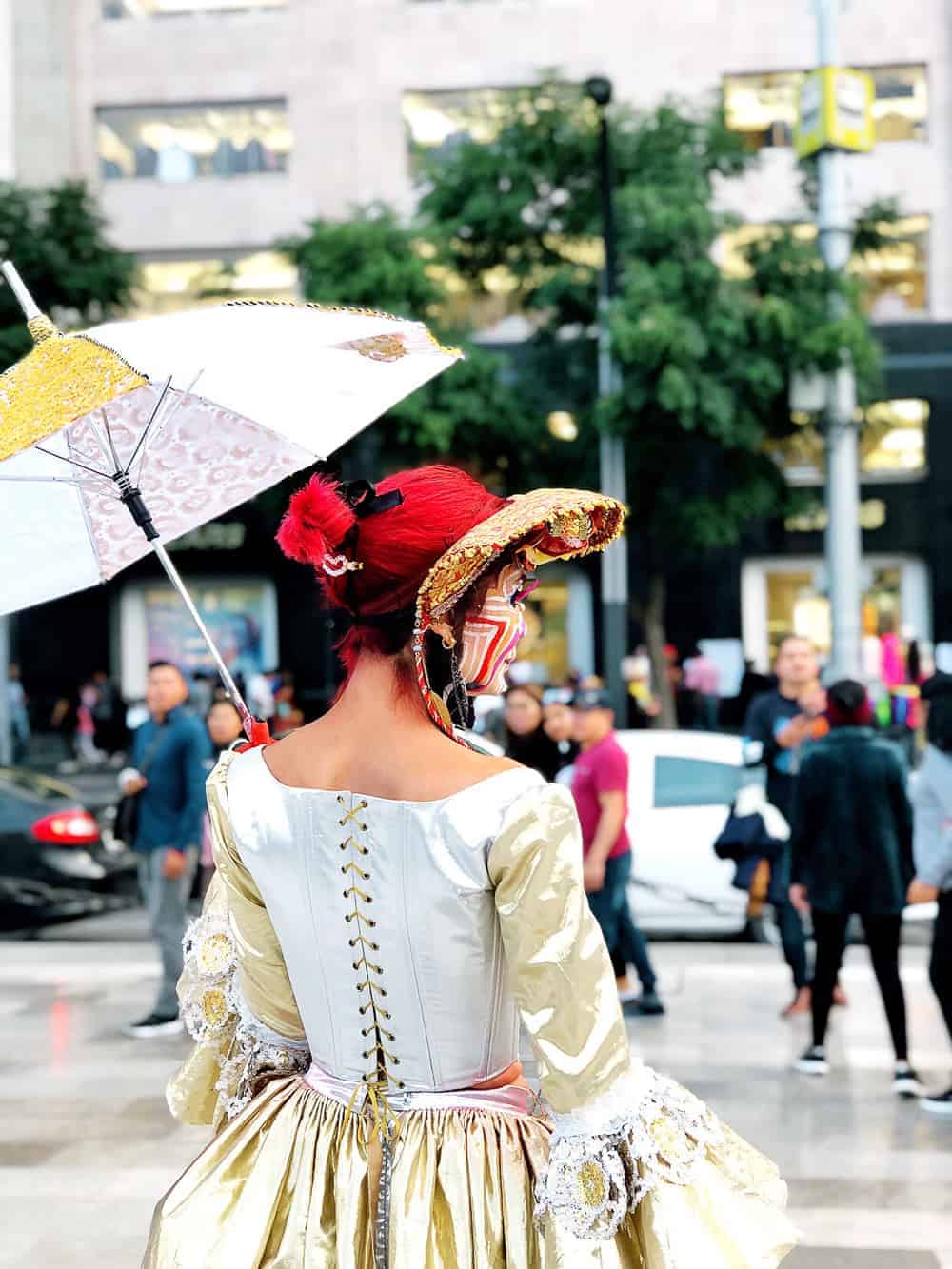 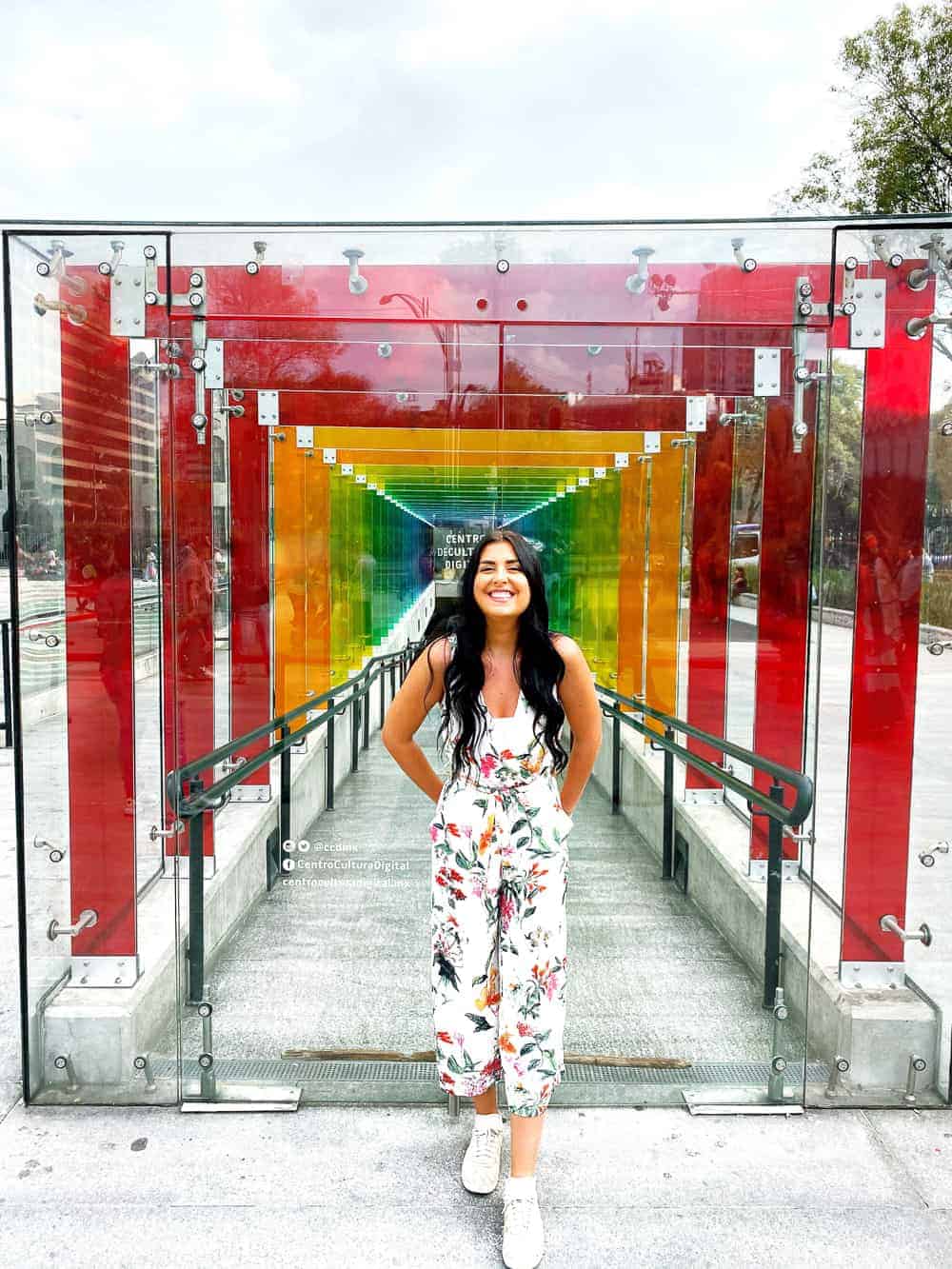 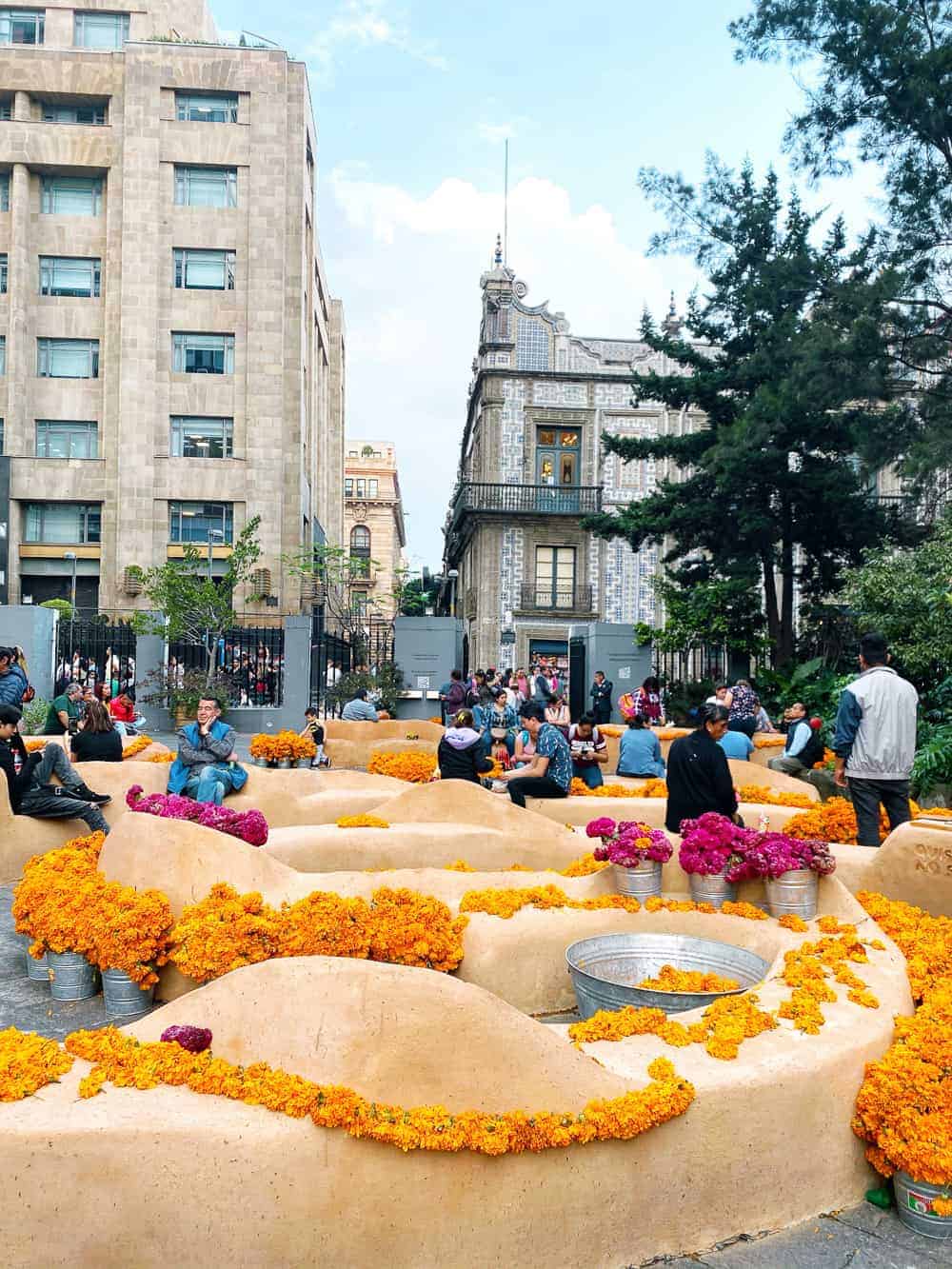 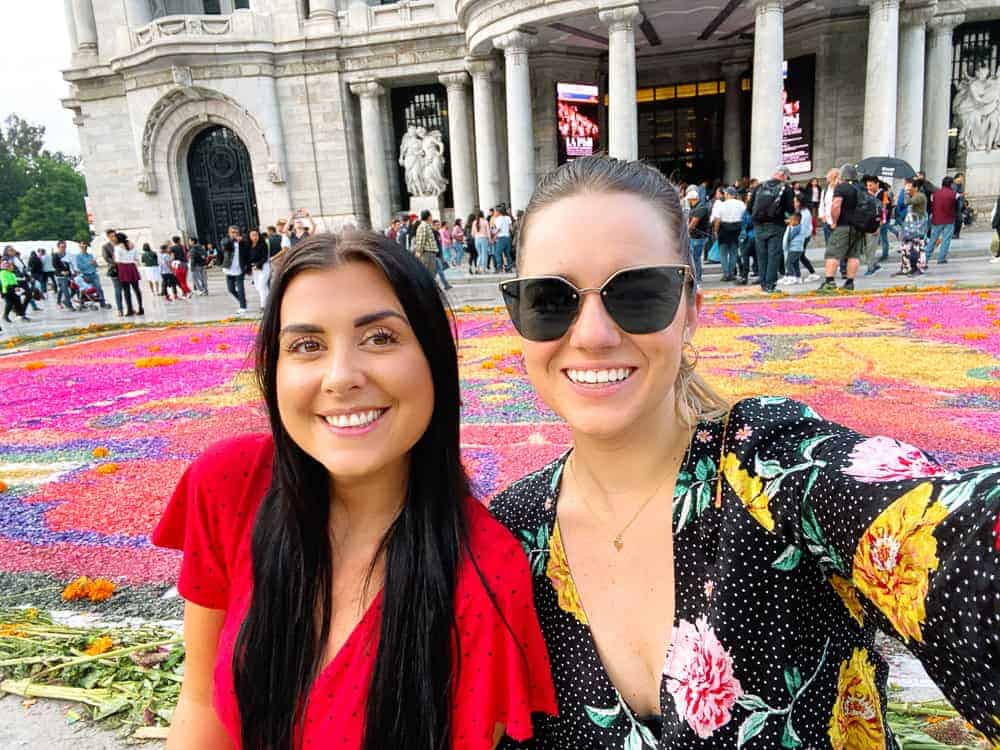 We took a stroll to the theatre, Palacio del Bellas Artes and were greeted by a beautiful display of flowers on the floor outside of the stunning building! It’s little things like this that are fun to find so take the time to explore the city and see what special Dia de Muertos bonus’s you can find! xx

Honeymoon in Spain: 3 Amazing Destinations For an Unforgettable Trip
April 19, 2022