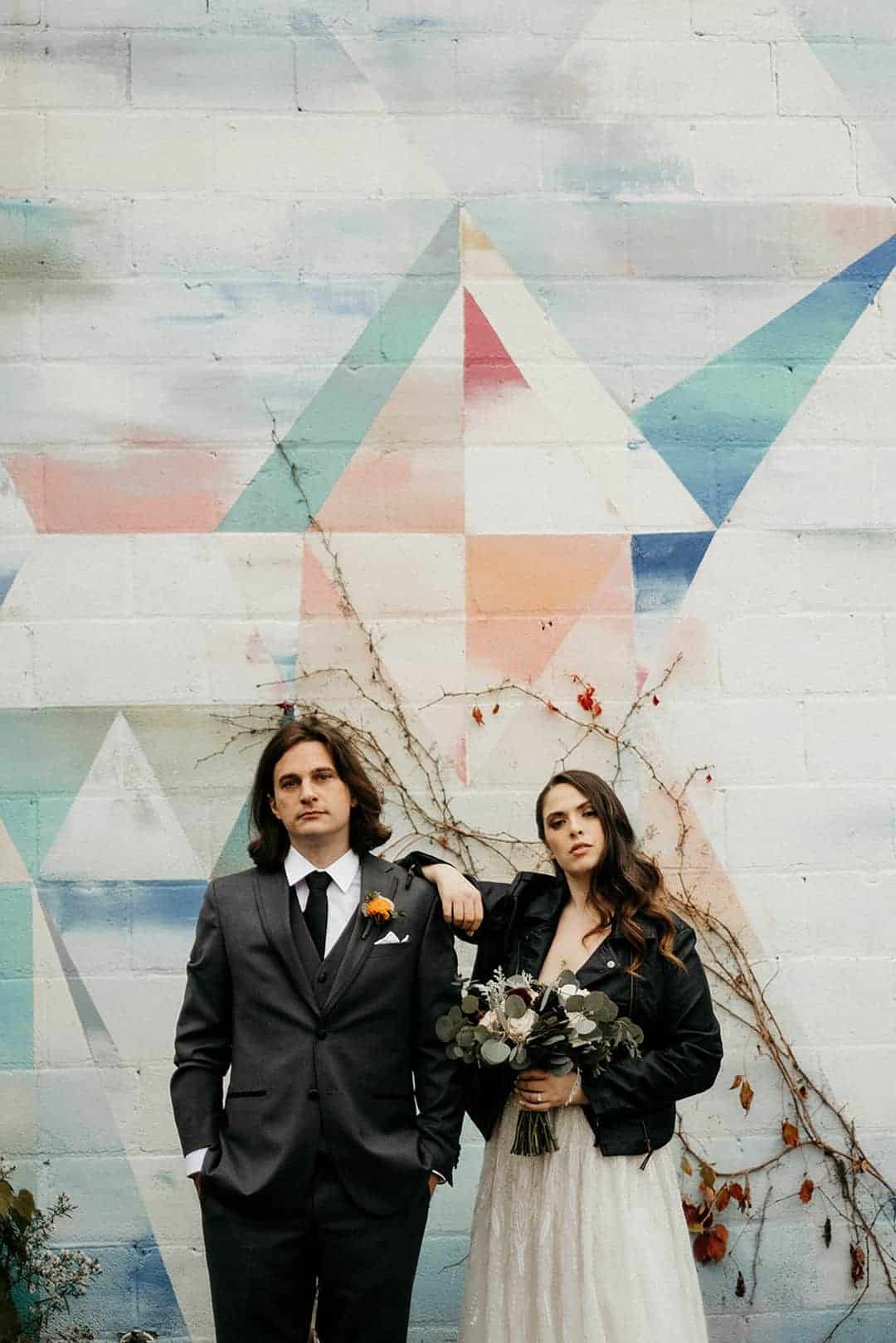 Rachael and Mike were brought together over their work in the arts and love of theatre, so a dramatic wedding was always in the cards. A unique venue was a must that was striking yet intimate. Rachael is culturally Jewish and Mike agnostic so they decided on a secular ceremony with Jewish elements. One of which was a gorgeous Huppah that Mike built especially for their ceremony. Mike’s mother also played the piano while his sister (a chorus member is the Metropolitan opera at Lincoln center) sang them a blessing. A down to earth couple they served gourmet pizza and decorated the 19th-century factory turned arts center with a double seated swing, vintage furniture found on estate auction sites all curated by the couple. A VW photobus, bottle dancers (re-enacting the famous scene from fiddler on the roof) and a fire dancer entertained guests. Rachael and Mike wanted this to be a day both they and their guests would never forget. 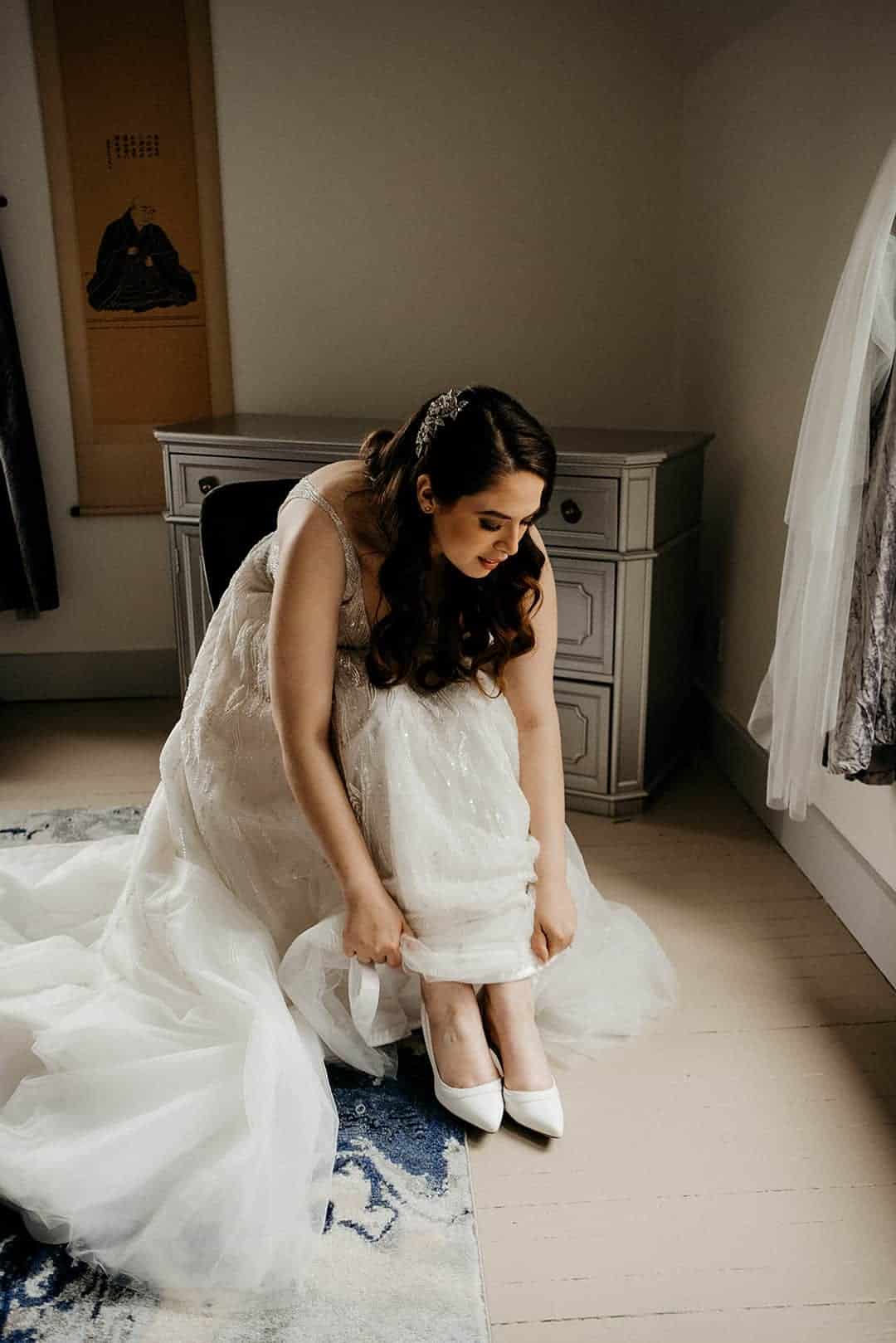 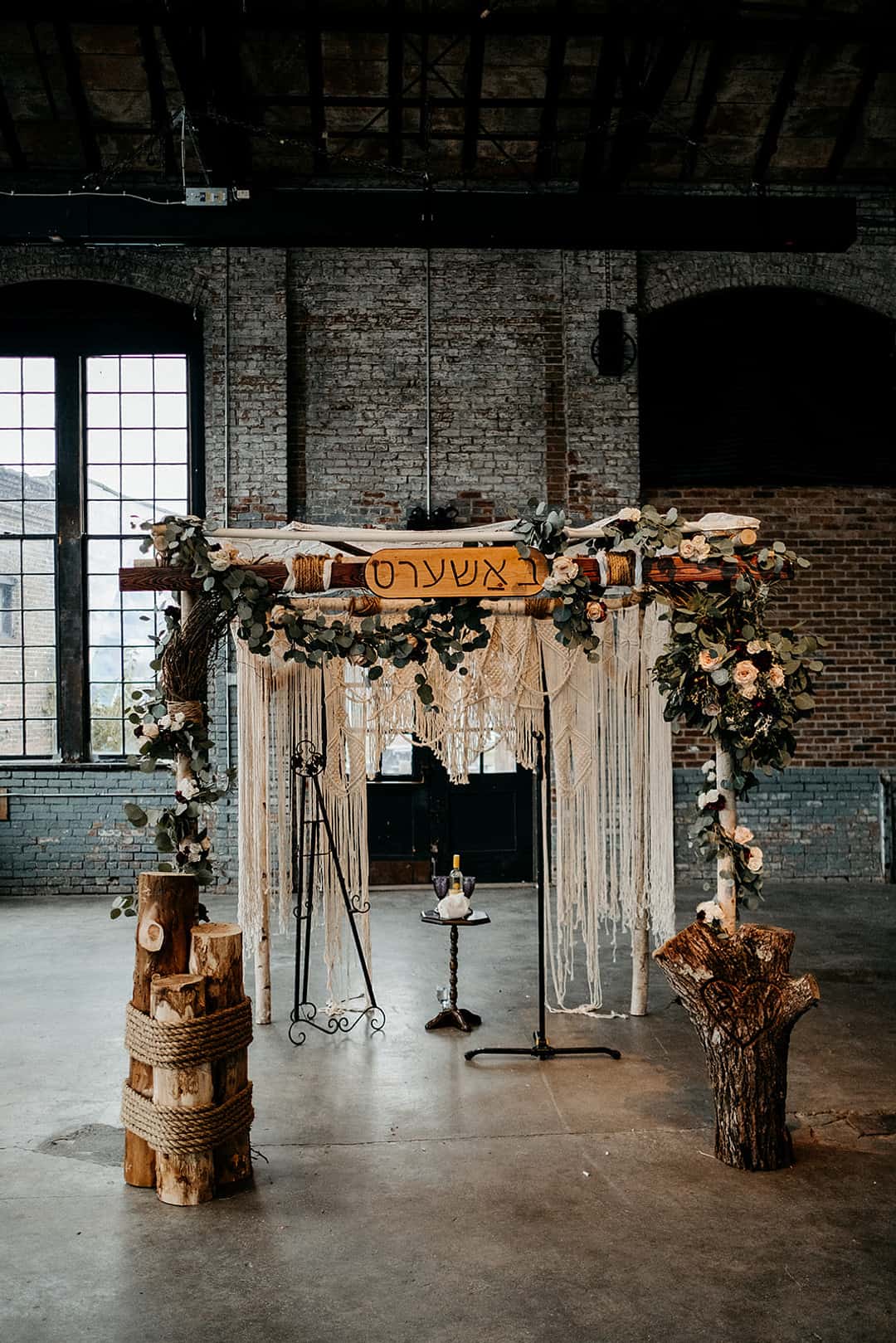 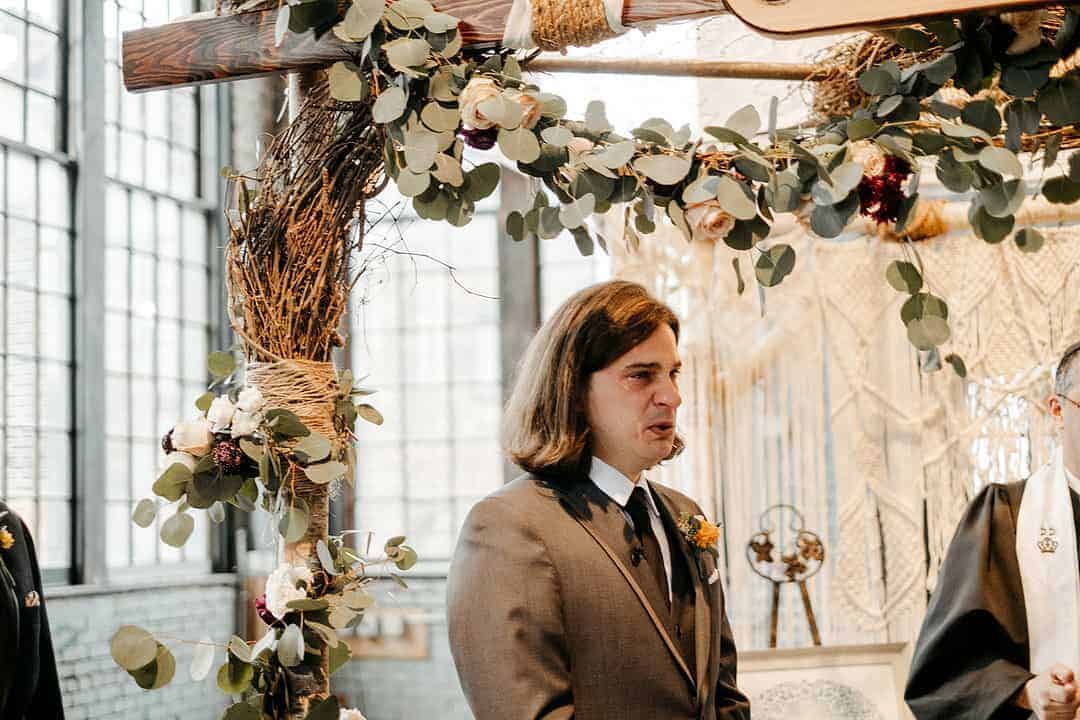 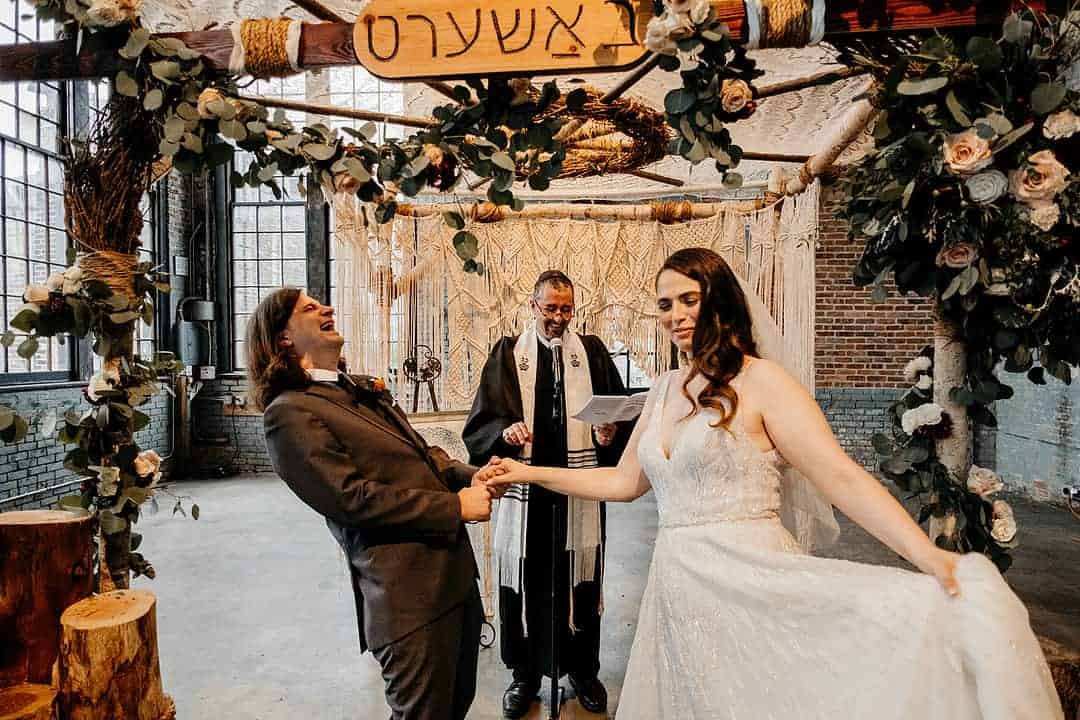 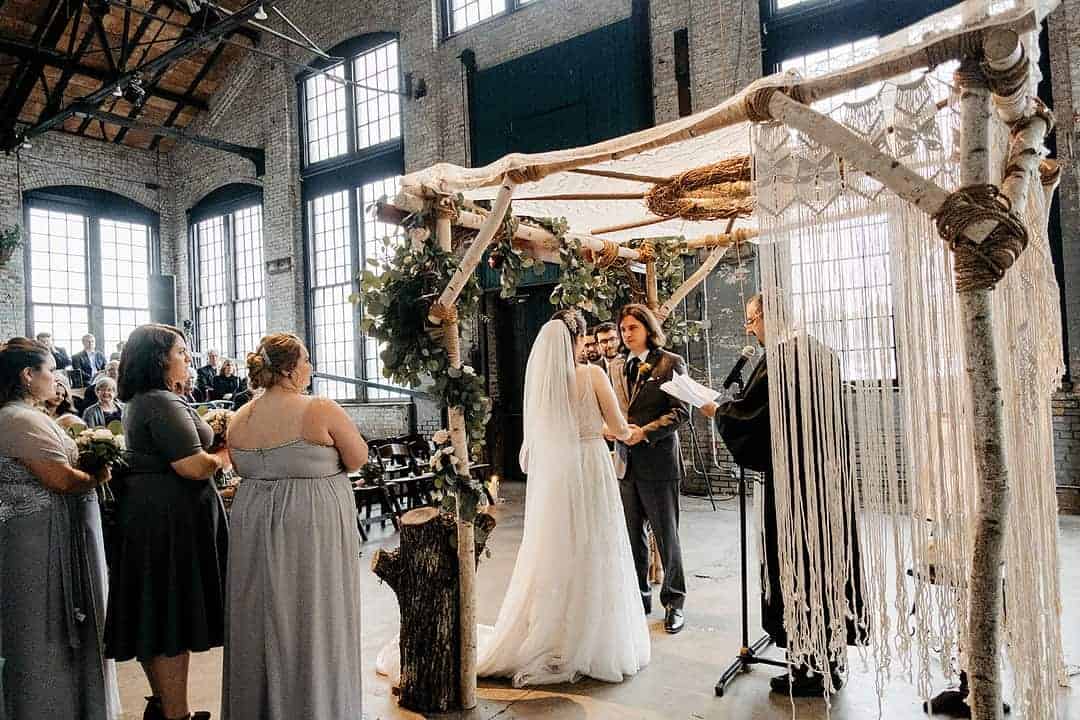 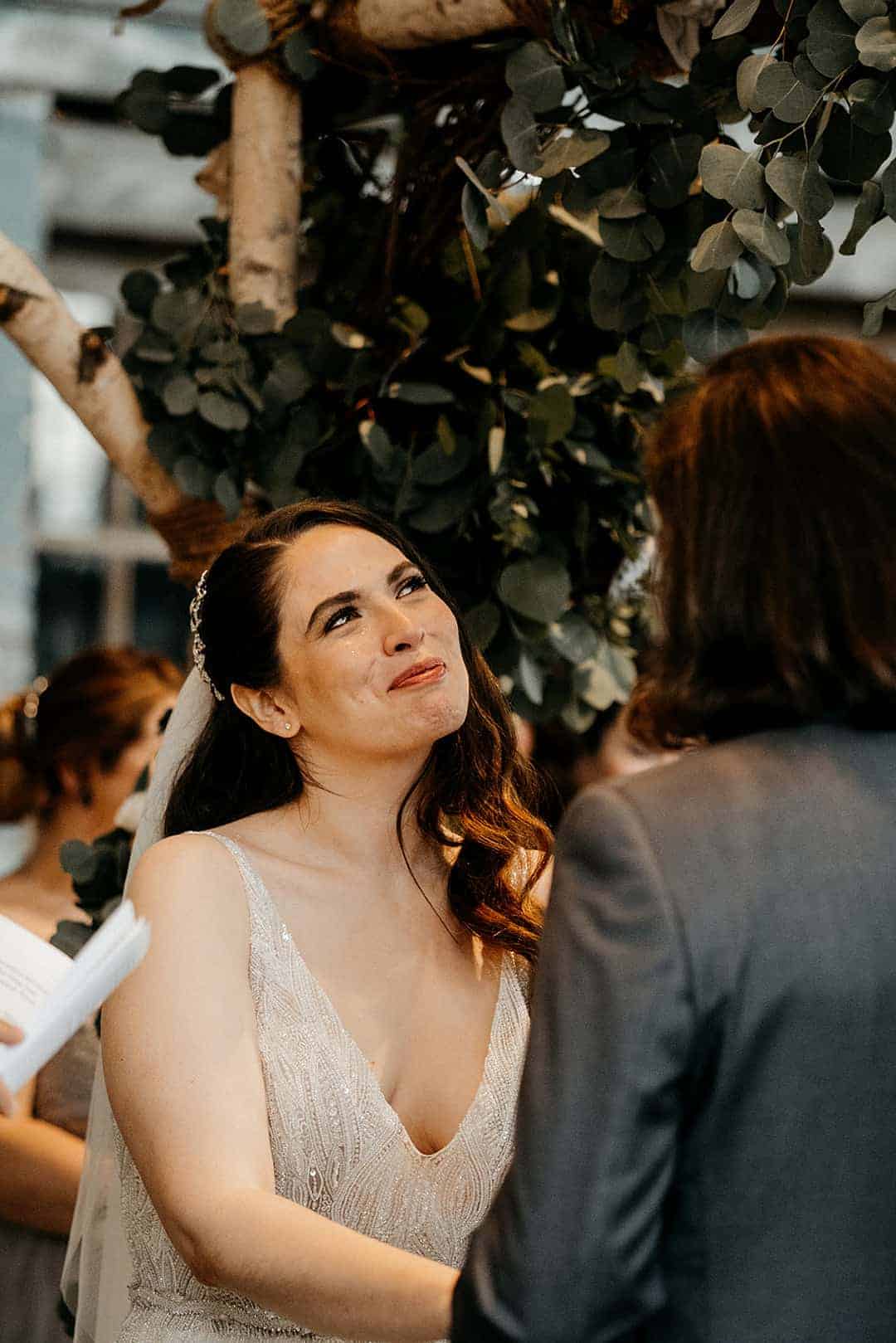 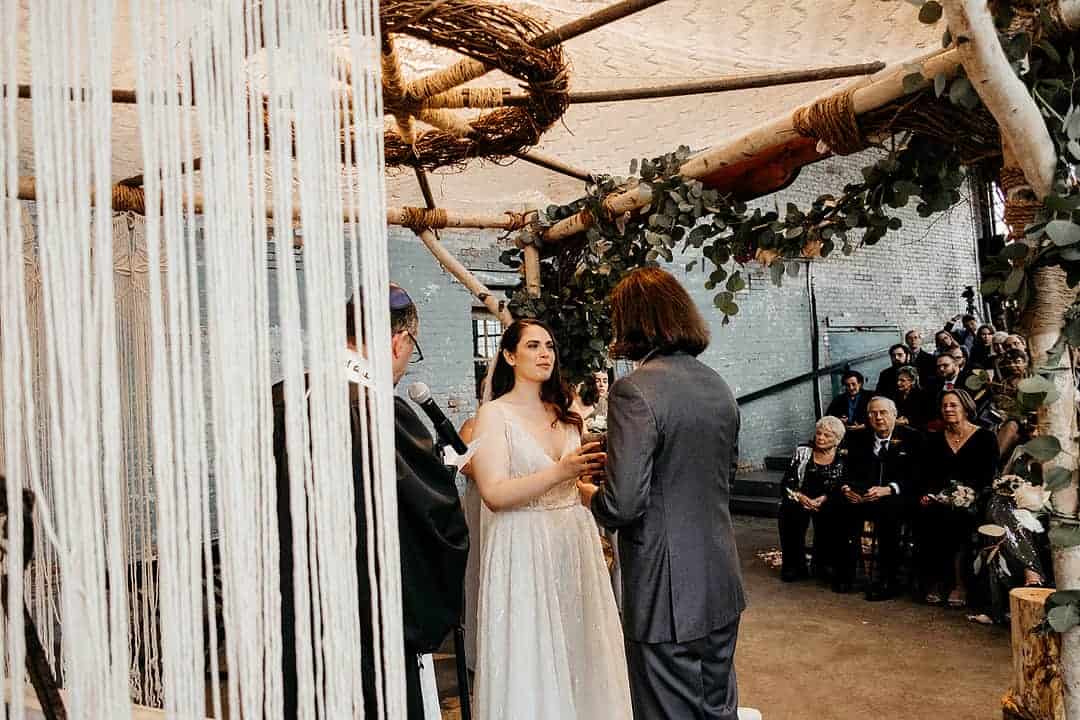 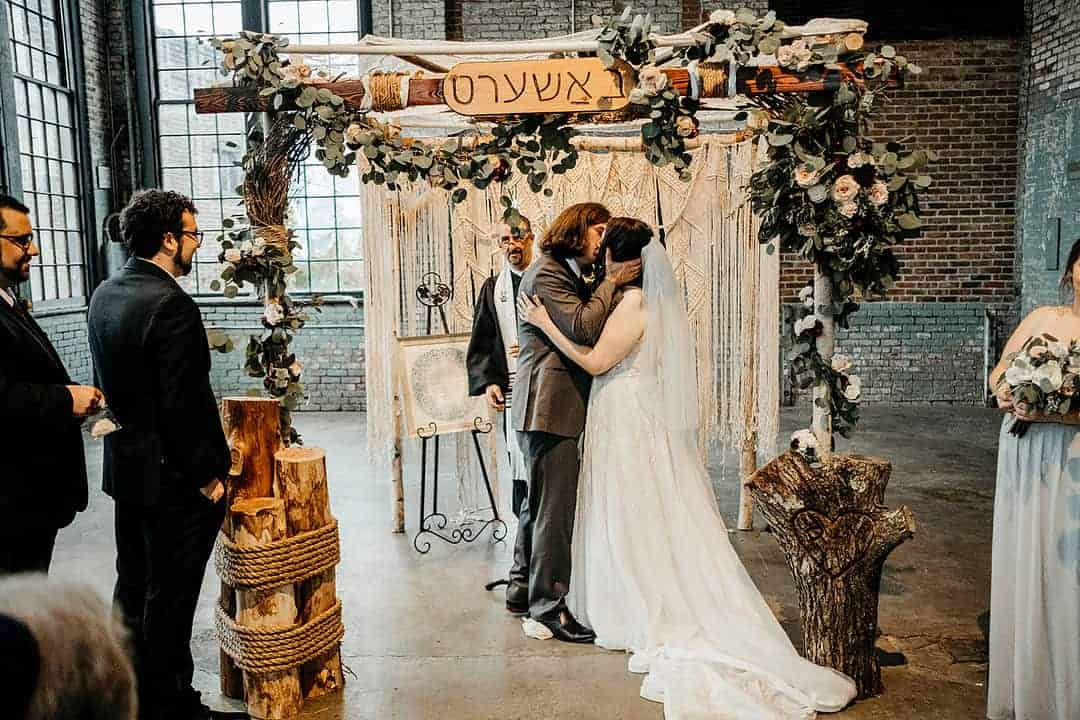 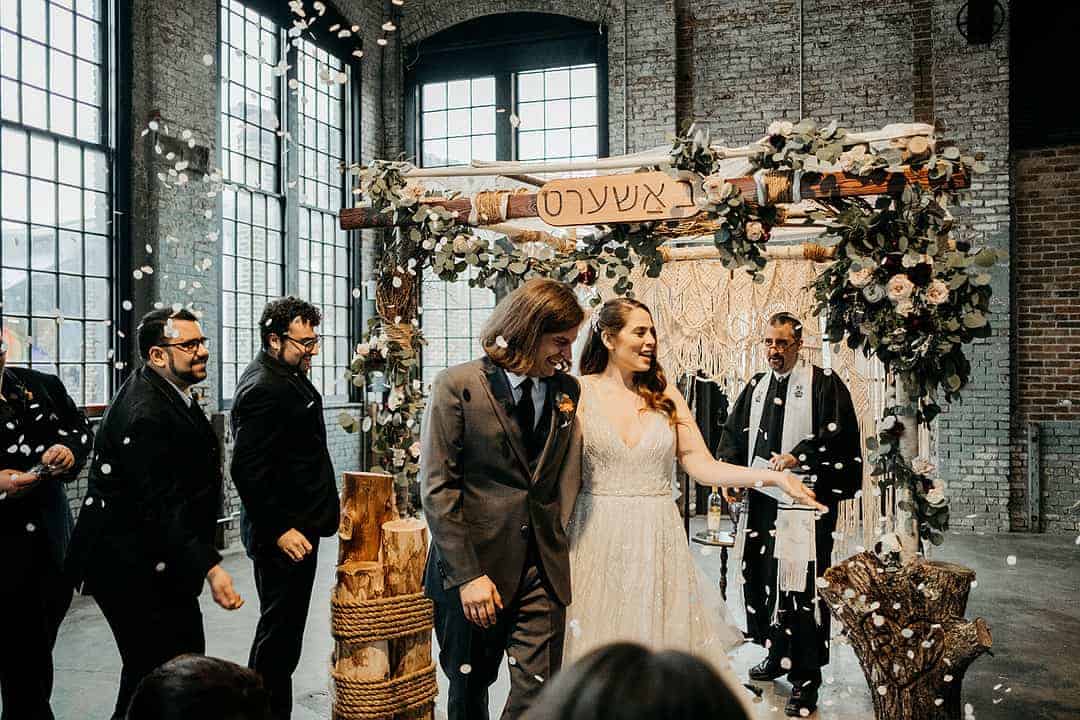 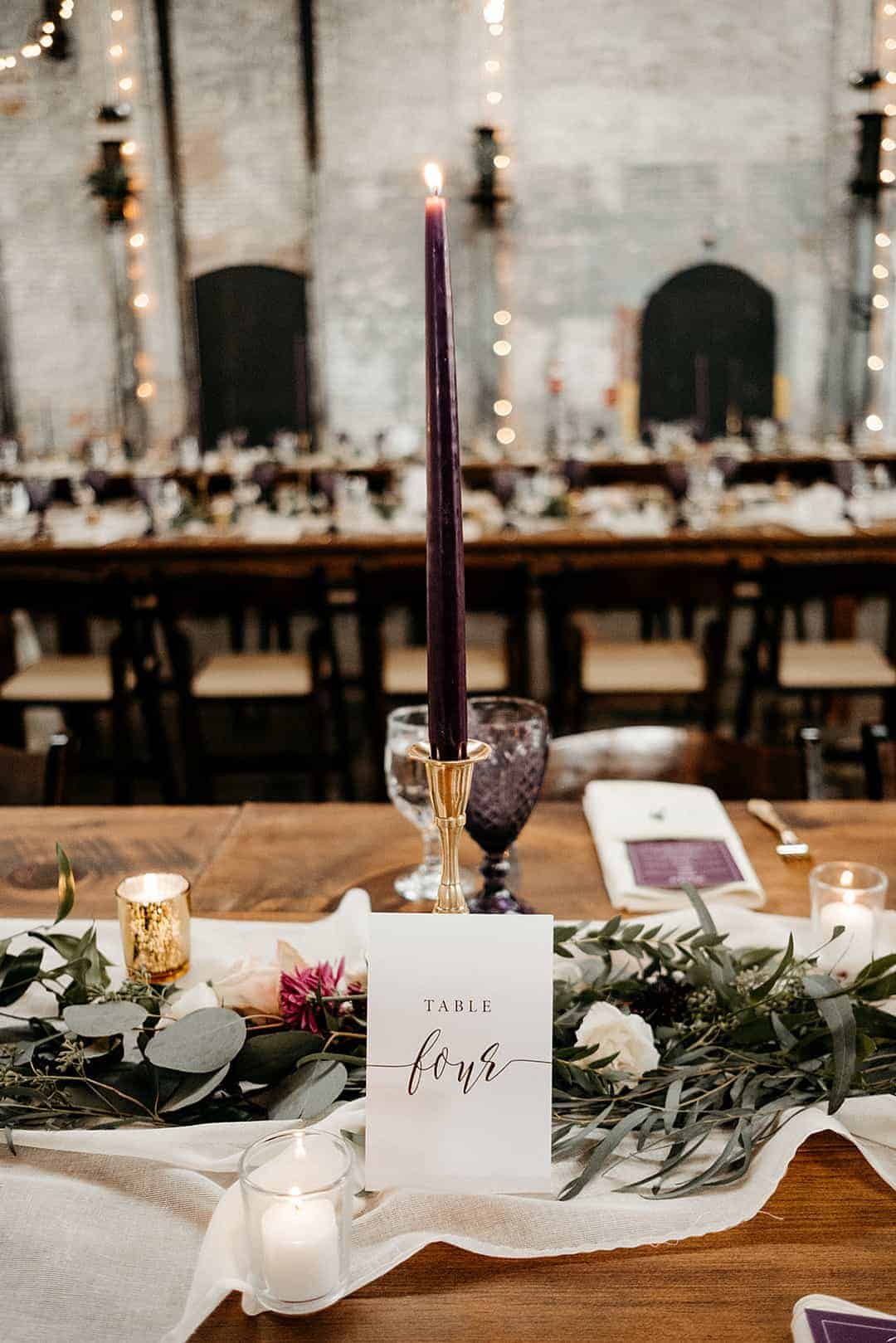 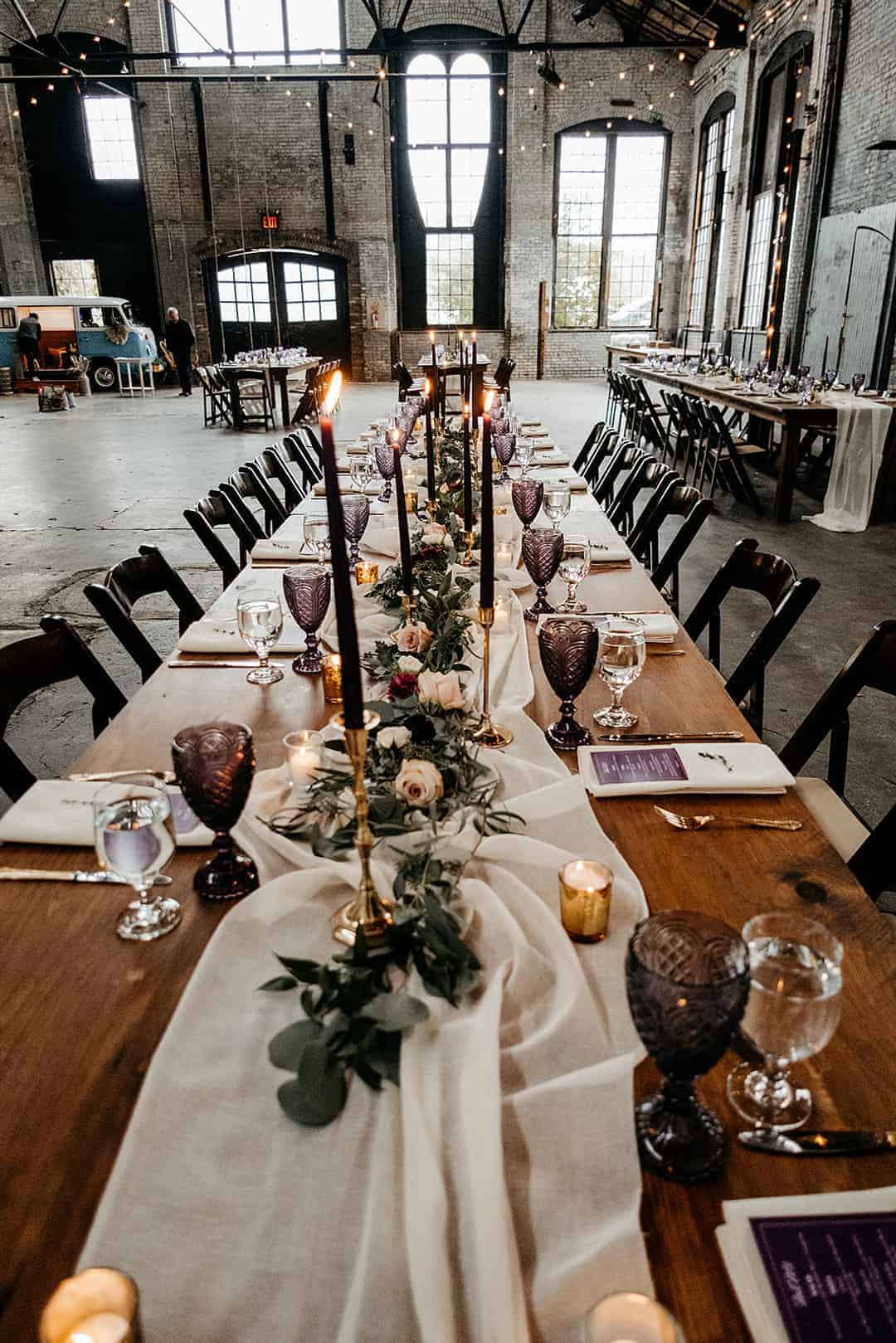 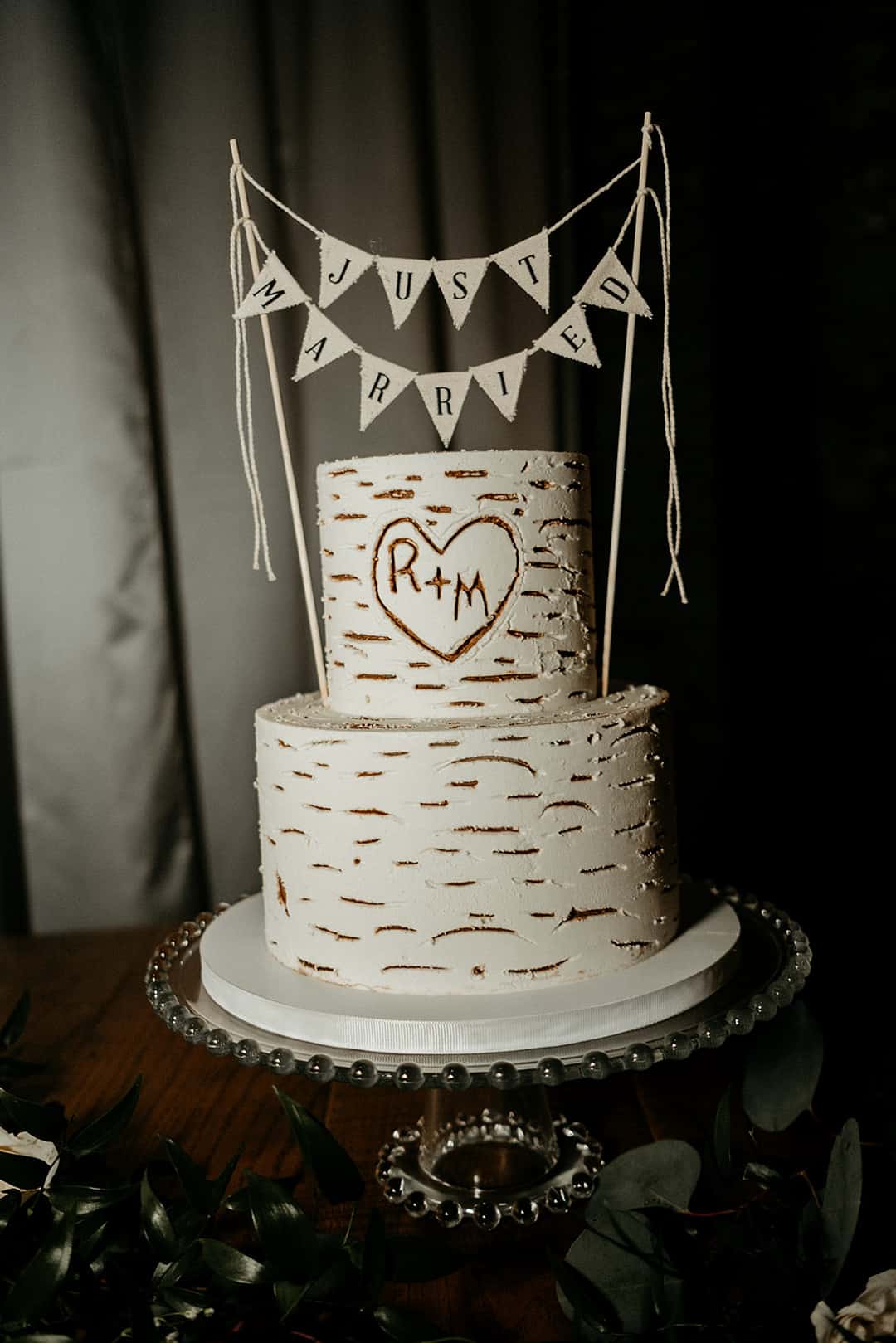 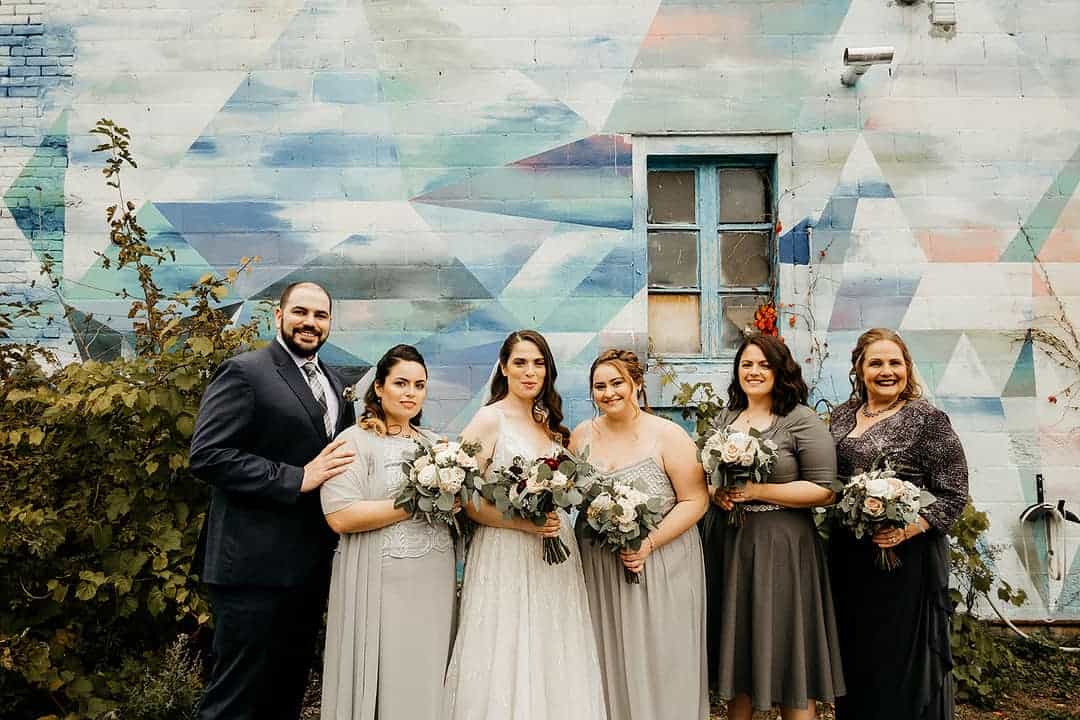 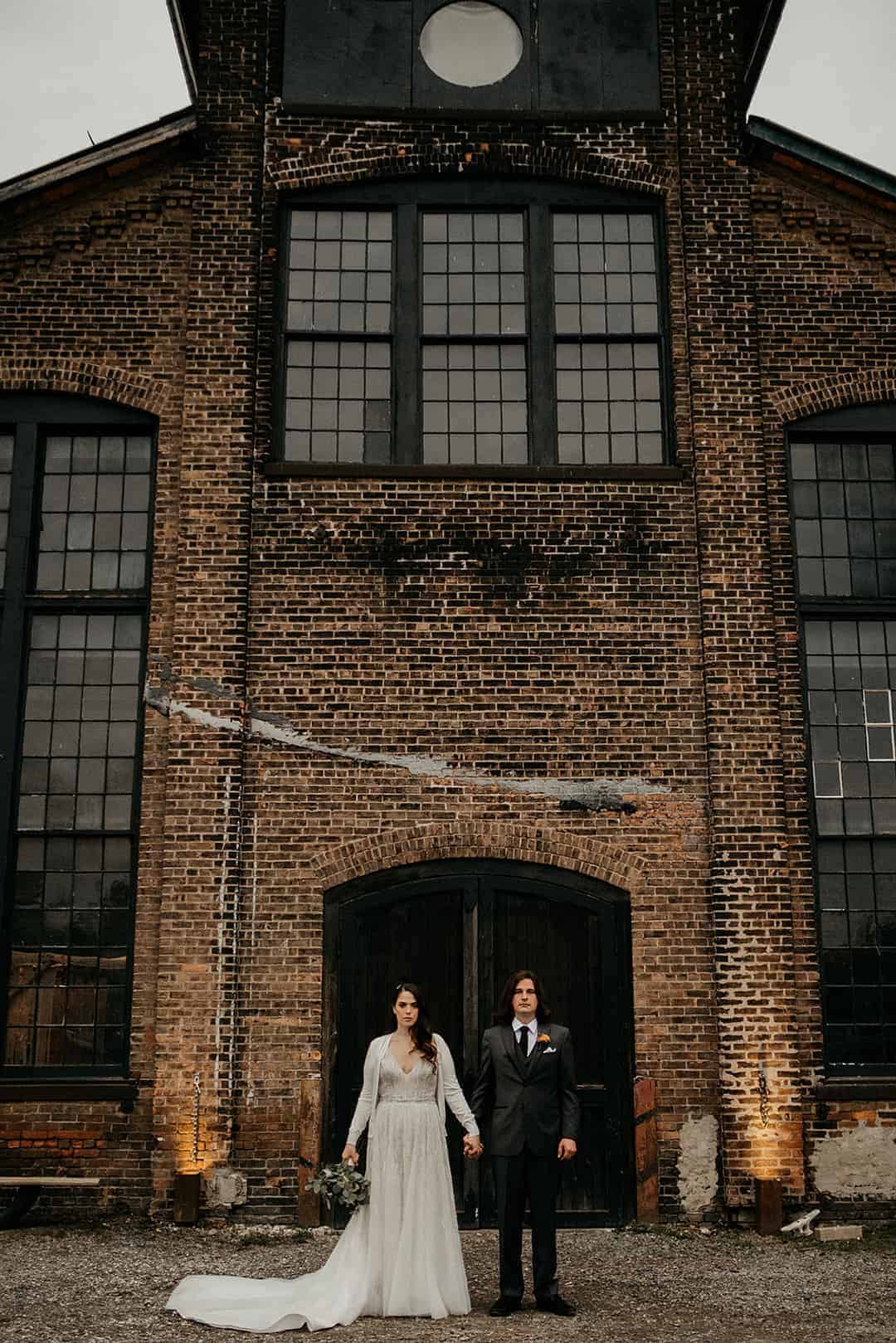 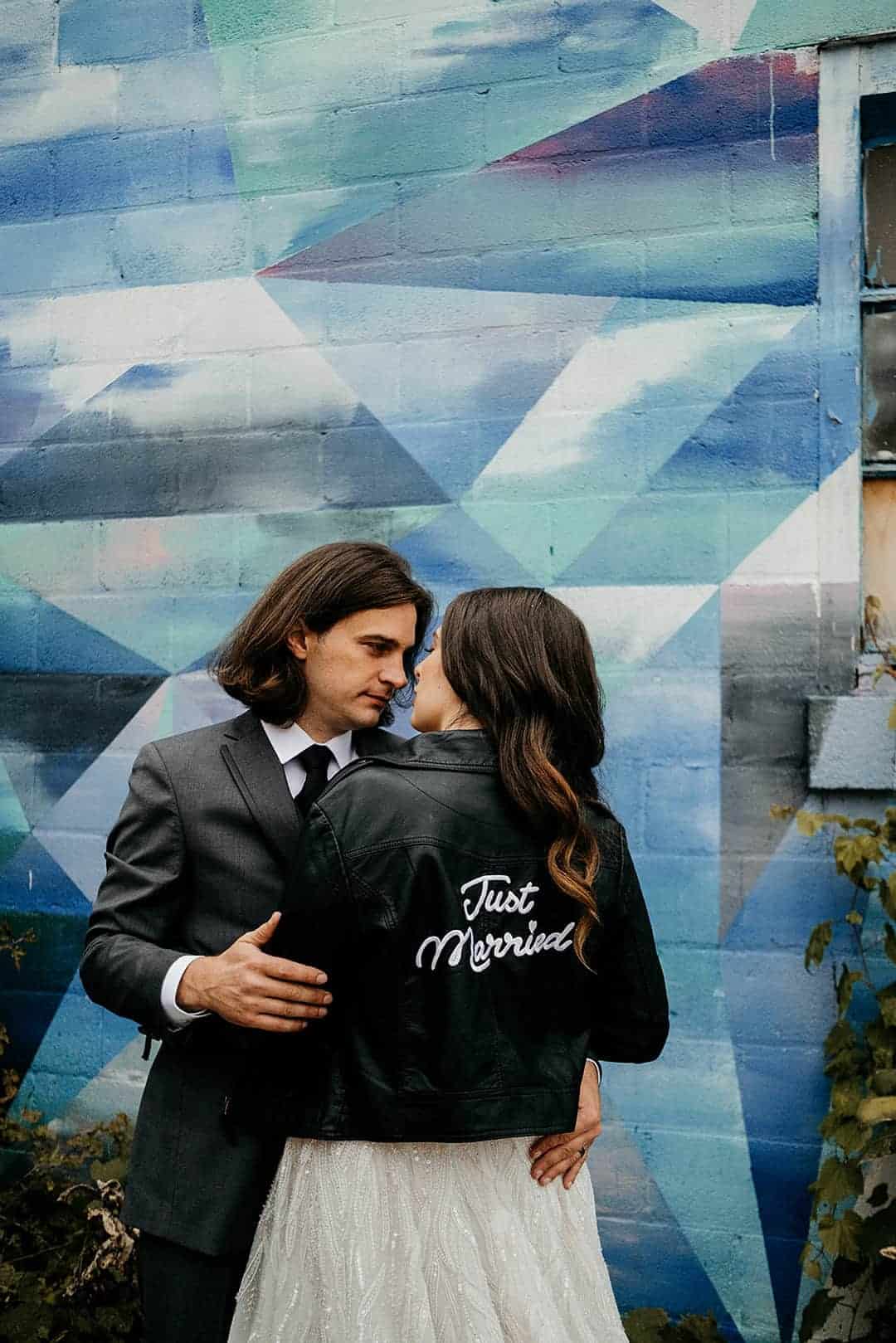 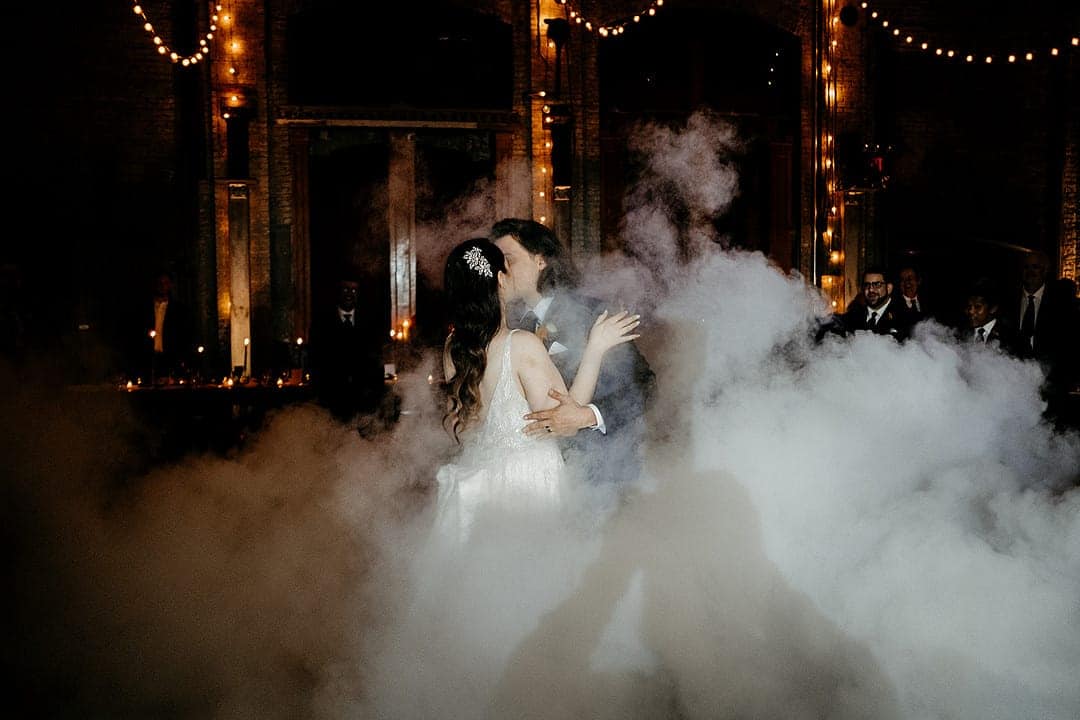 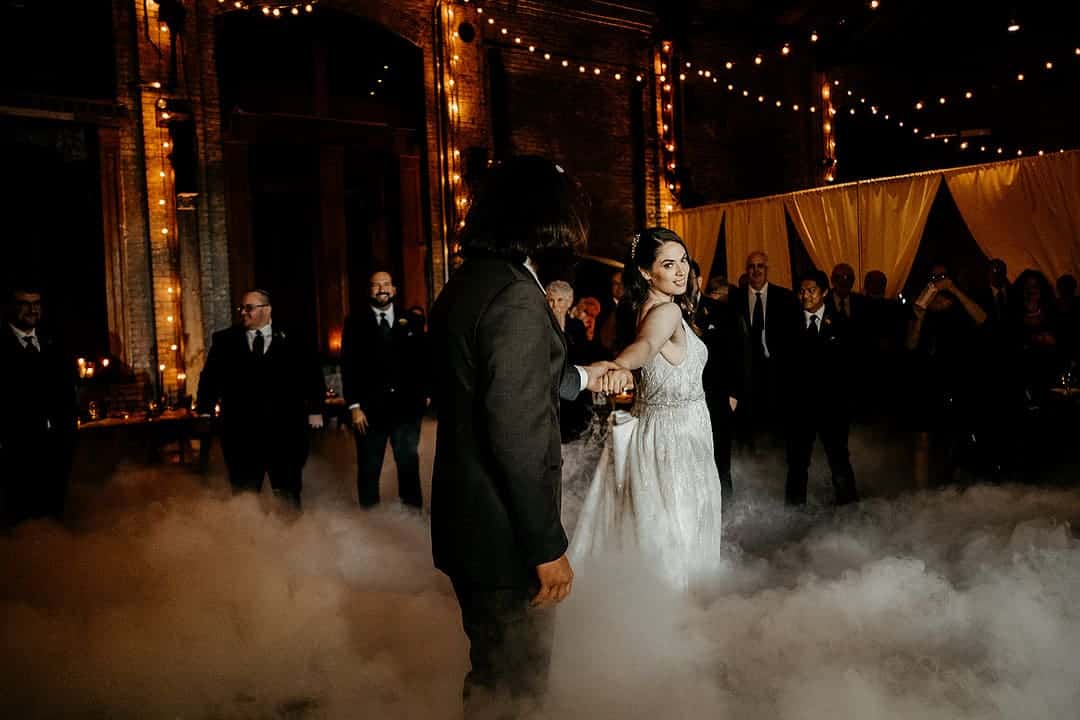 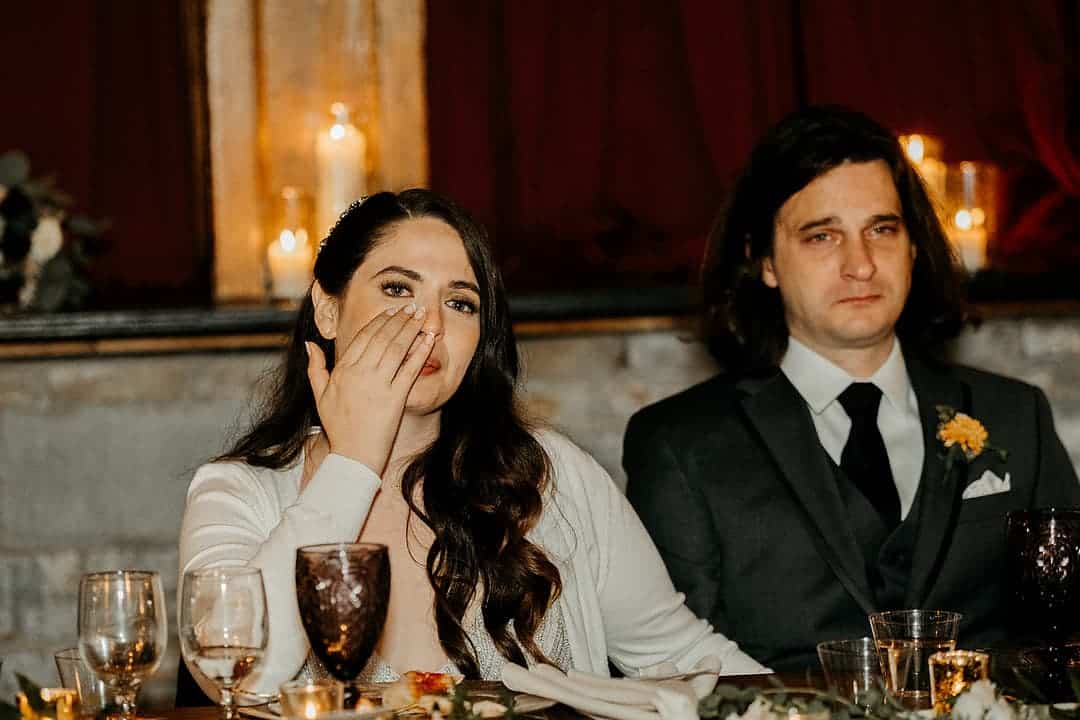 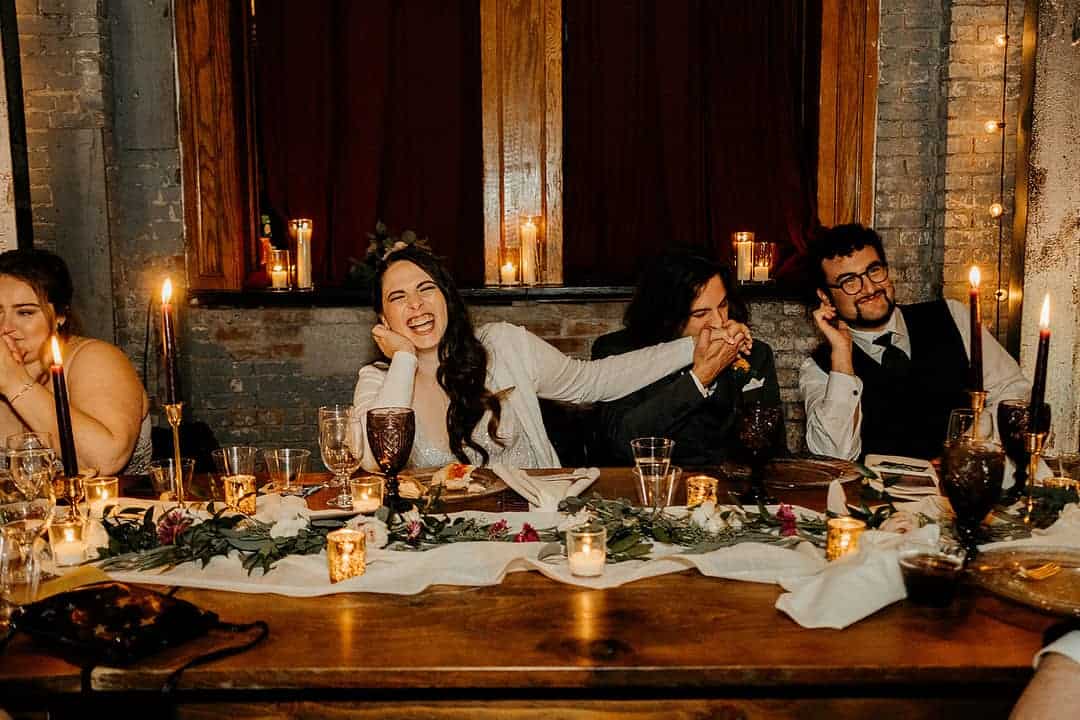 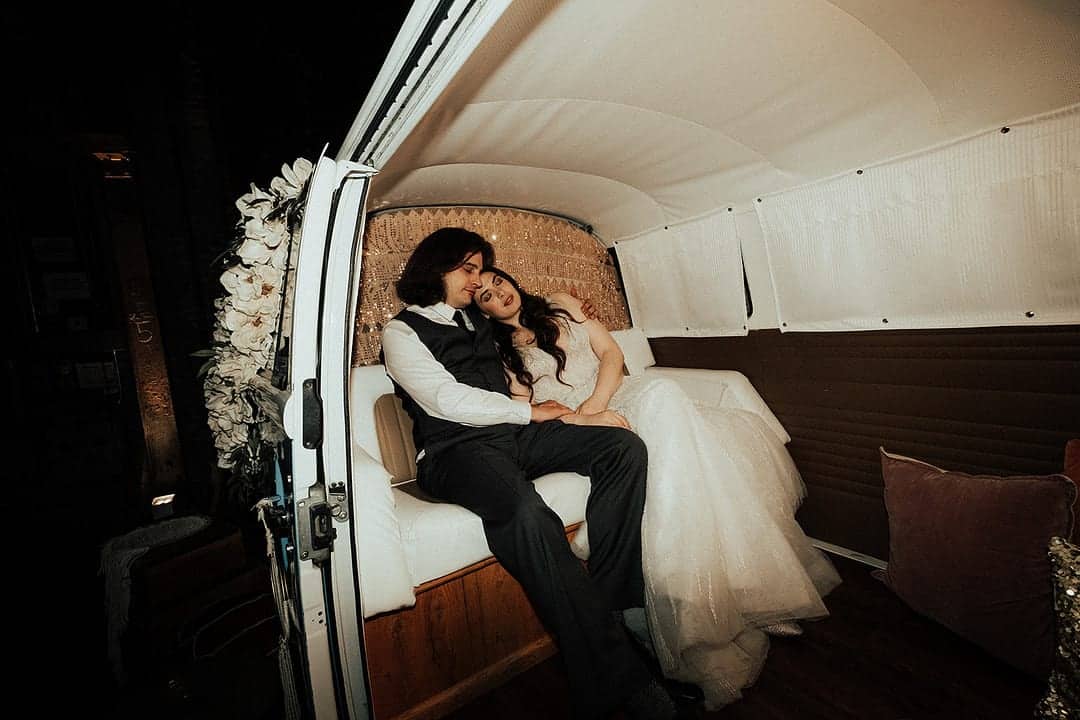 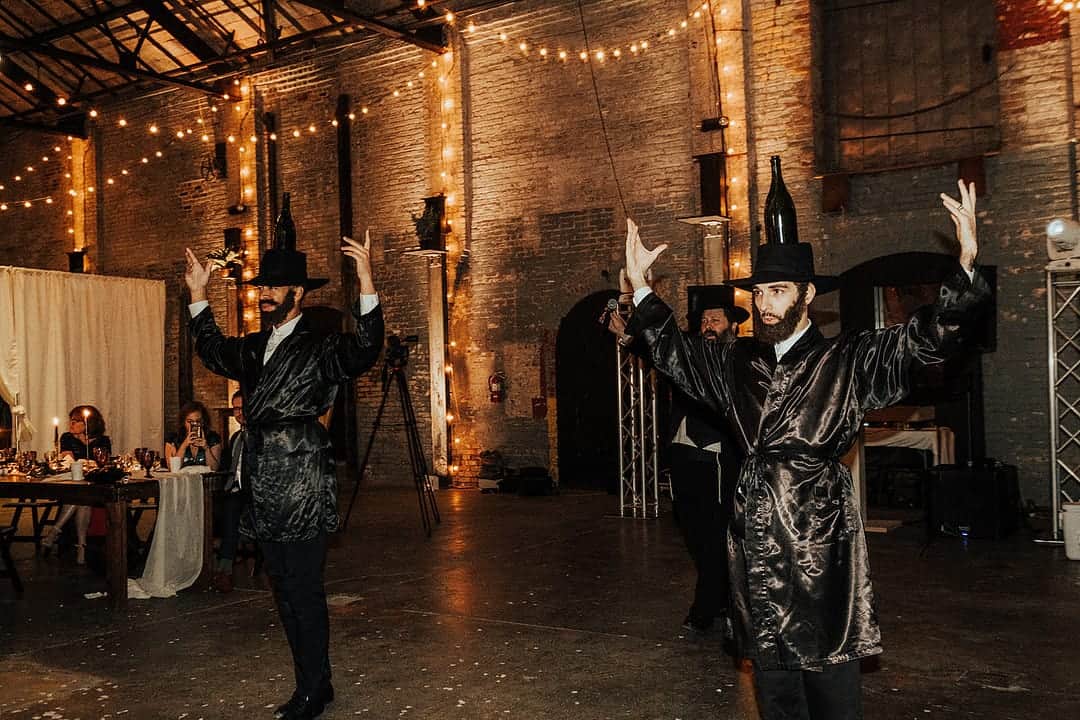 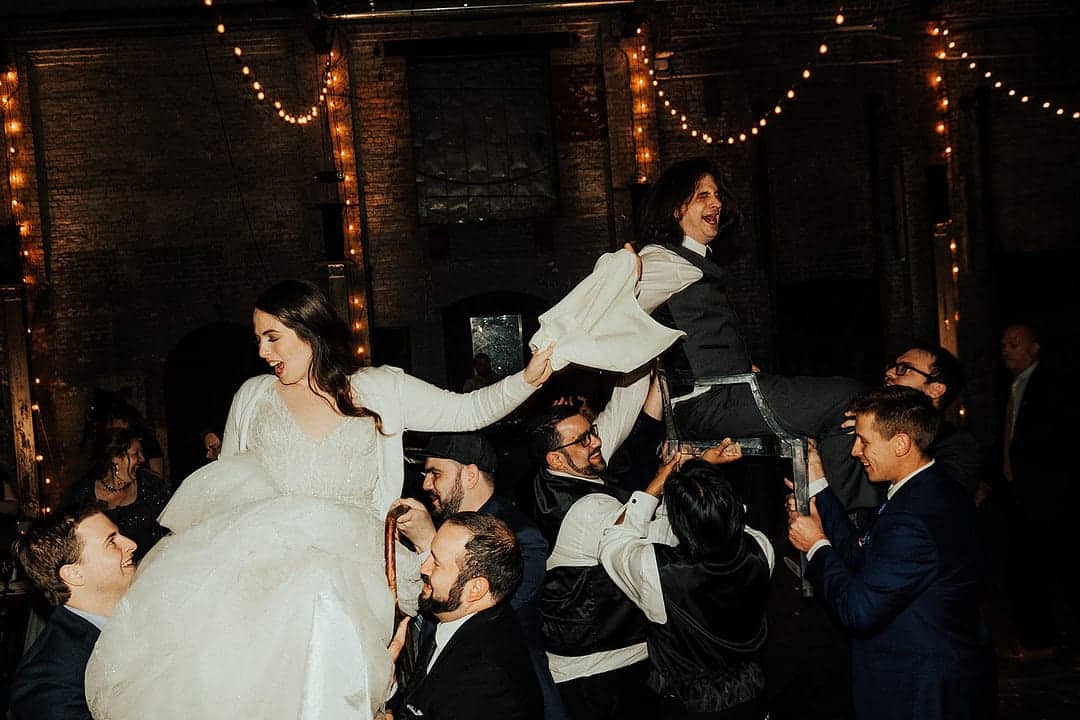 “We only took 9 months to plan our wedding but both being theatrical we went right into design mode!” Rachael began.

“We found lots of vintage pieces on the ‘Let Go app’ or estate auctions. We bought or borrowed bar carts, vintage suitcases, cake stands, decanters, macrame, vintage rugs, chairs and a love seat. We wanted to create a vintage lounge space for two reasons. One because the space is huge, it can fit 300 people and we were having 100, and two – to have a place for guests that wanted a more relaxed vibe if they didn’t feel like dancing or needed a break.” She explained.

“The bouquets had a lot of greenery with some blush roses, a few deeper purple colored florals and dusty miller. I love how dusty miller has a lace like texture. Similar florals also adorned the huppah. For the table we went with greenery runners accented with just pops of color. We wanted the candles both votives and deep purple taper candles to stand out and we also knew we wanted people to be able to see the other people at the table so tall arrangements were out!”

“We tried to incorporate so many personal touches. We really wanted this to be a reflection of who we are as a couple. Mike cried the entire ceremony and it was so sweet and loving. Our officiant had us write letters to each other but send them to him and he incorporated them into our ceremony so we were surprised by some of the funny and heartfelt things we shared without knowing what the other one wrote. Having Mike’s sister sing us a Hebrew blessing was not only special because she is a professional opera singer but because it came straight from her heart. She is also not Jewish and learned the blessing just for us.”

“Our first dance was also very special. We decided to do the dancing on the cloud effect which can be cheesy but in our space we thought it looked magical. Mike timed the exact moment when the smoke was going to billow and pulled me in for a kiss and everyone started cheering, it was a movie moment, I’ll never forget. I also hired bottle dancers as a surprise for Mike and I was so excited to see the look on his face when they started dancing.”

“I actually became a wedding designer/planner after planning my own wedding and it was all because I’d worked with such an awesome planner, so I highly recommend hiring a good wedding planner for your own wedding.” Rachael told us.

“Be flexible, not everything will go perfectly but that’s ok. Embrace the ebbs and flows. Try to be in the moment as much as possible. Hydrate. Try not to take it all too seriously. Enjoy yourself and realize any bumps in the road end up in the rearview mirror faster than you think!”