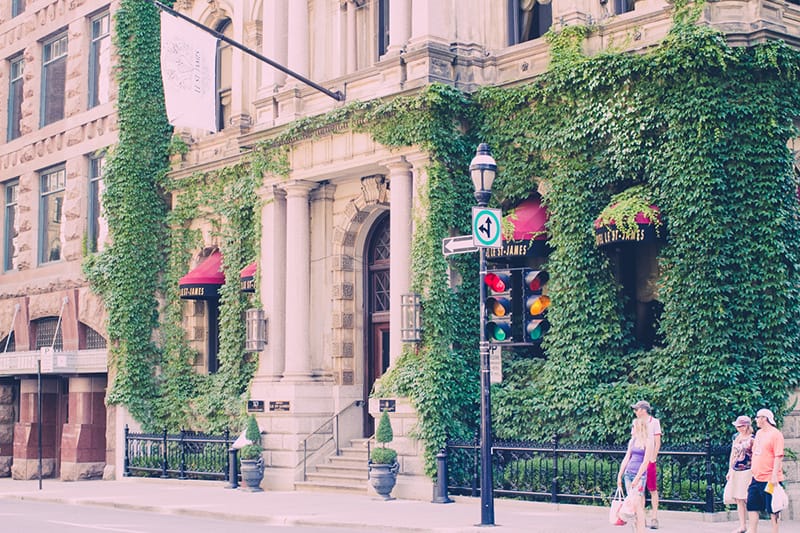 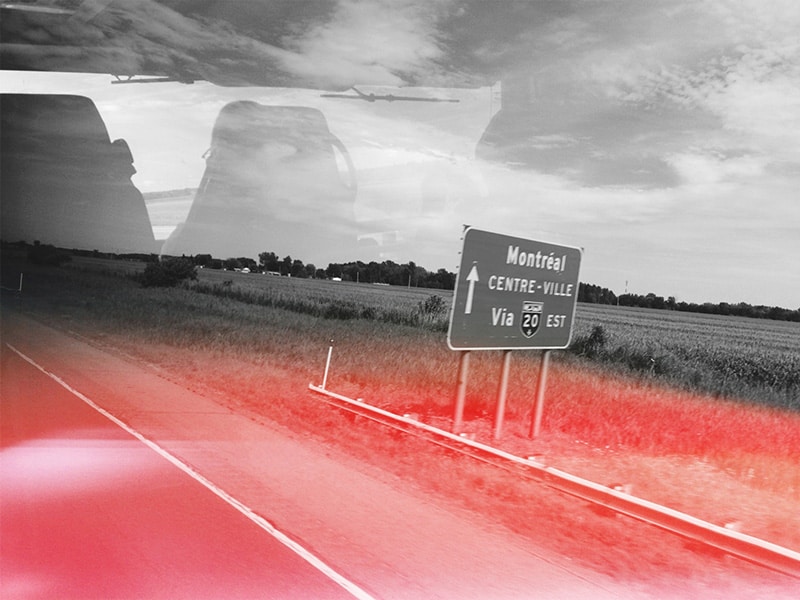 If I learnt anything on my trip to Canada it was that I am truly lucky to have such amazing family and friends in another country who were willing to make mine & James’ trip so special. One of the highlights for me was definitely visiting Montreal & Quebec City. Not only because I was reunited with my close friend Anne who lives there but because I was amazed at the amount of character & charm the places had! 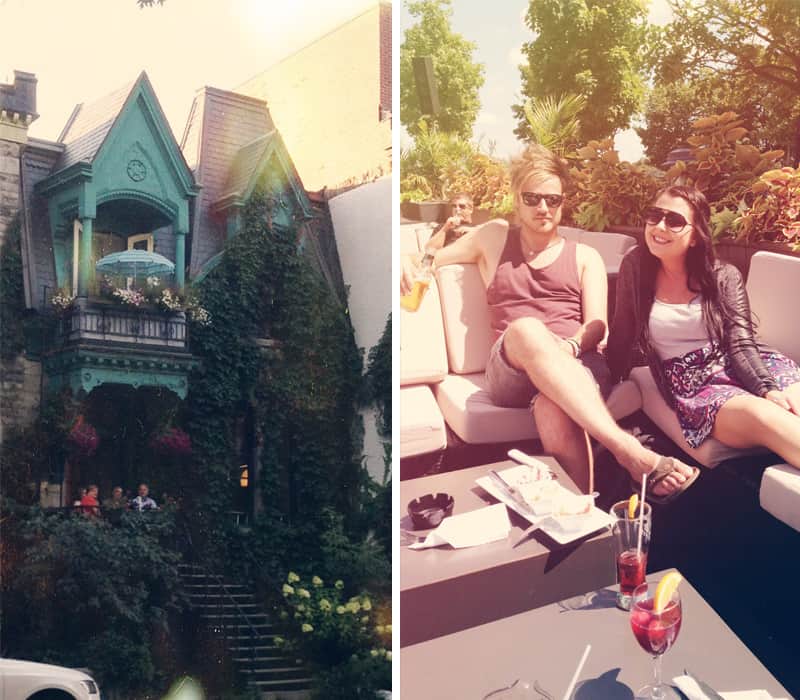 That’s pretty much my dream house right there. HOW CUTE IS IT?! This little baby was nestled in Plateau Mont Royal in Montreal. 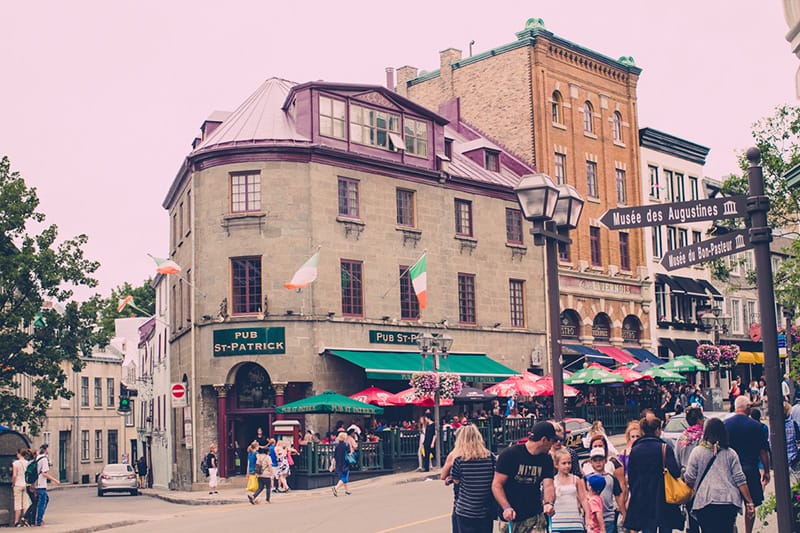 Let’s talk about Quebec City because that was our first stop! Being in Quebec City was a strange feeling because it really didn’t feel like I was in Canada, it was all very European looking, which was of course beautiful! Old Quebec was a treasure of small roads and cute little shops and stalls! Of course we were also amazed by the famous Chateau Frontenac & the Plaine d’abraham! I was also pretty impressed with Anne’s amazing map skills…just kidding Anne 😉 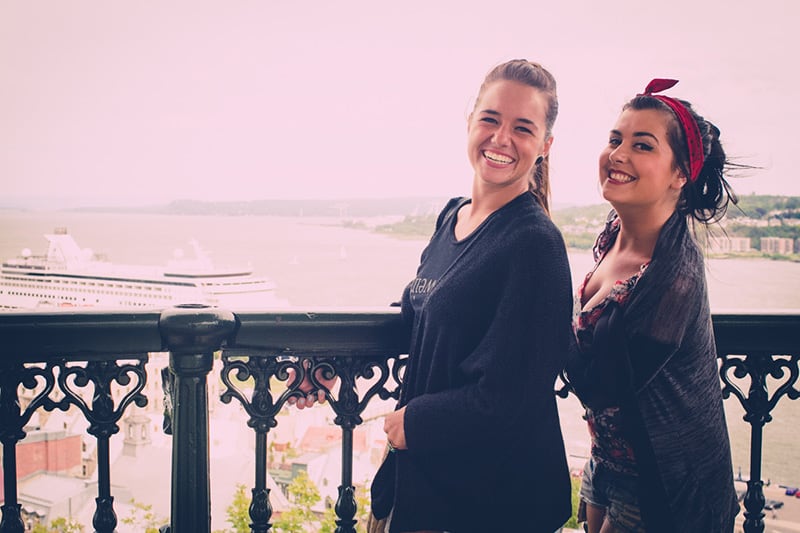 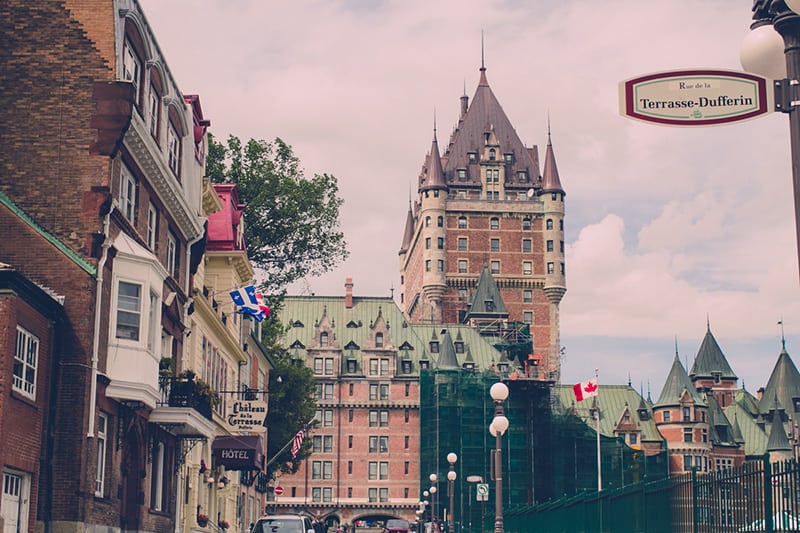 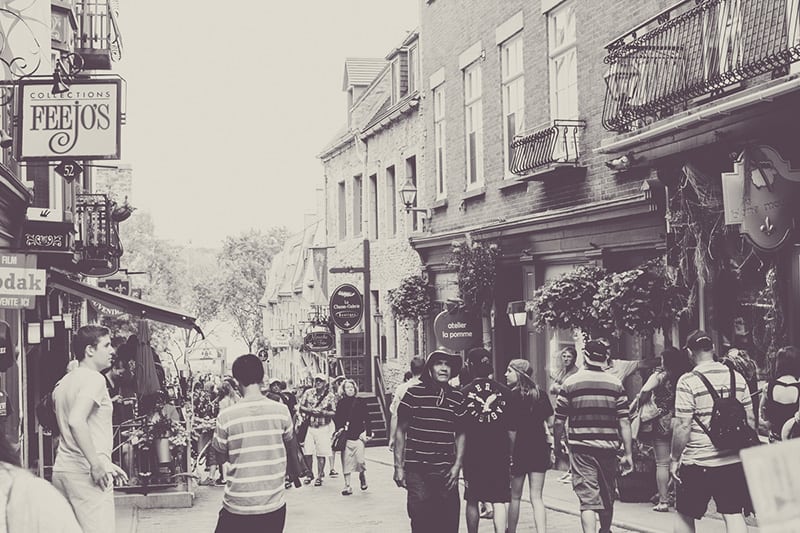 One of my favourite things about Quebec City was the paintings on the wall and the musicians dotted around, it really was such a sweet and charming place! 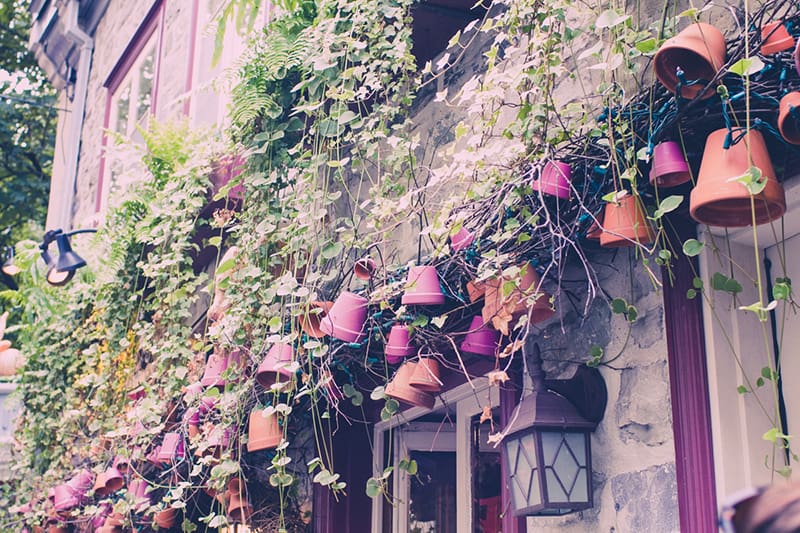 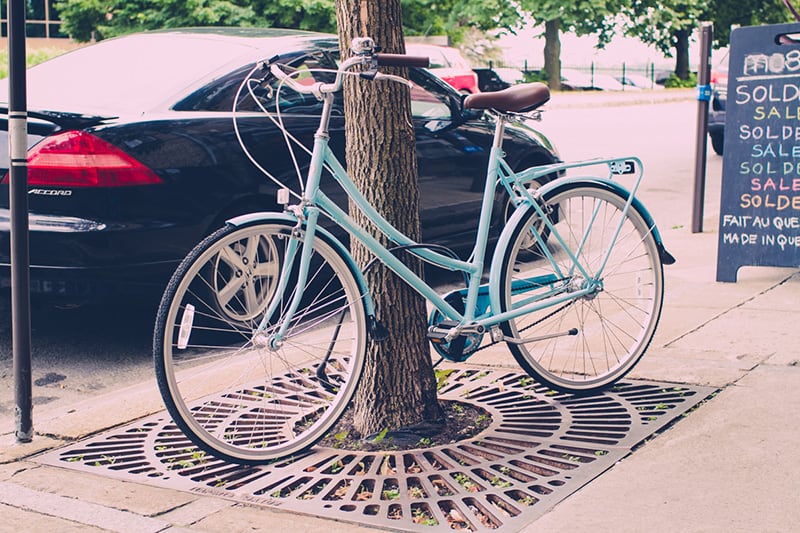 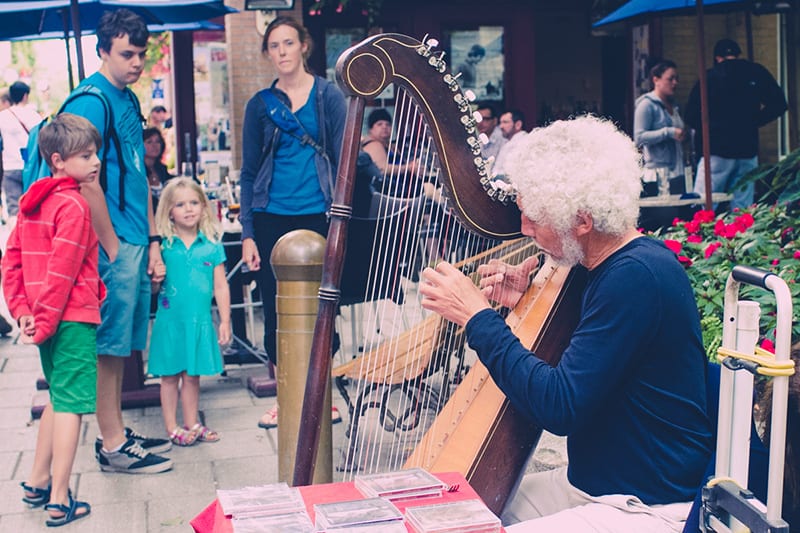 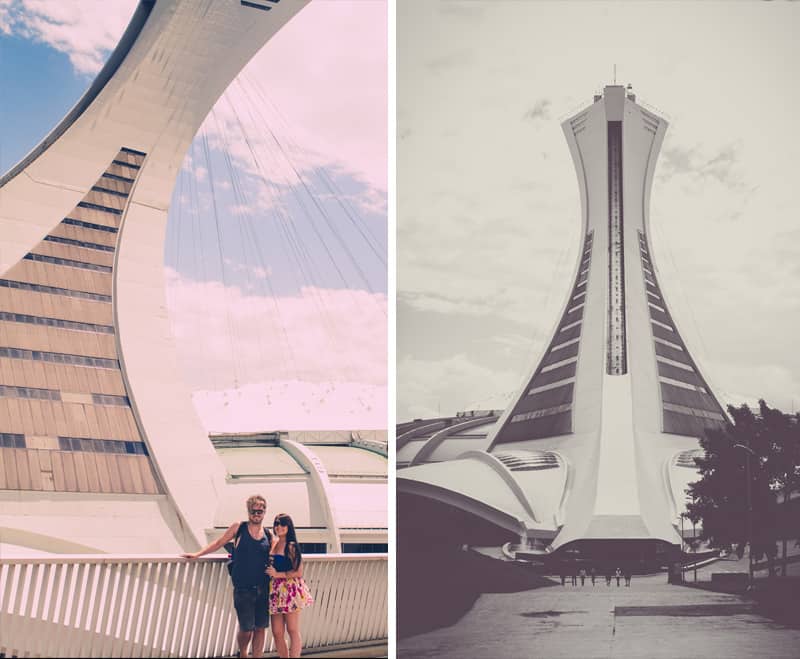 We kicked off day 2 by visiting the Olympic stadium in Montreal! This was extra exciting for me since we all know I’m obsessed with the Kardashians and this is the place where Bruce Jenner won his gold and was rocketed to fame! (I know…i’m so sad! Haha) The most crazy thing about this building was that it was built for the 1976 olympics yet to me it looked so futuristic! The design was so modern and weird, I loved it!

Next stop was the botanical gardens which was AMAZING! Well, what’s not to love about tons of beautiful flowers and plants arranged in the shapes of people and animals?! We did get a heavy down pour of rain while we were there and took cover in a tepee but after a few minutes it had eased off and the weather was lovely again! 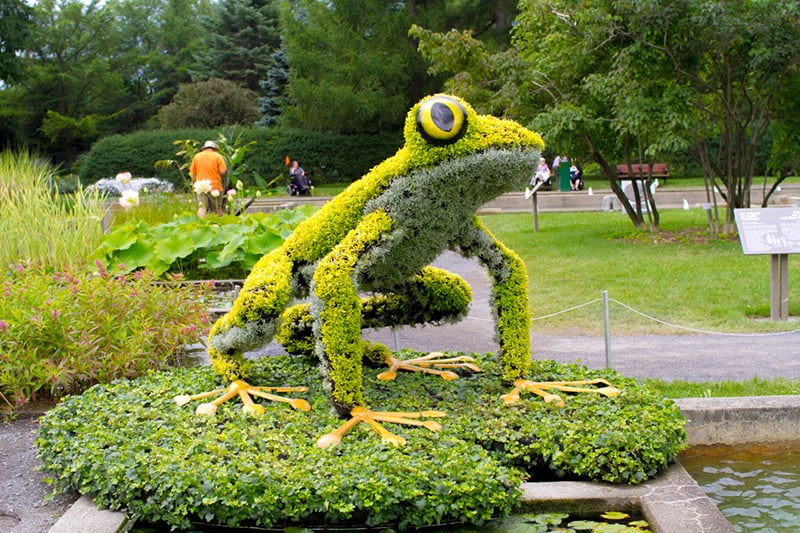 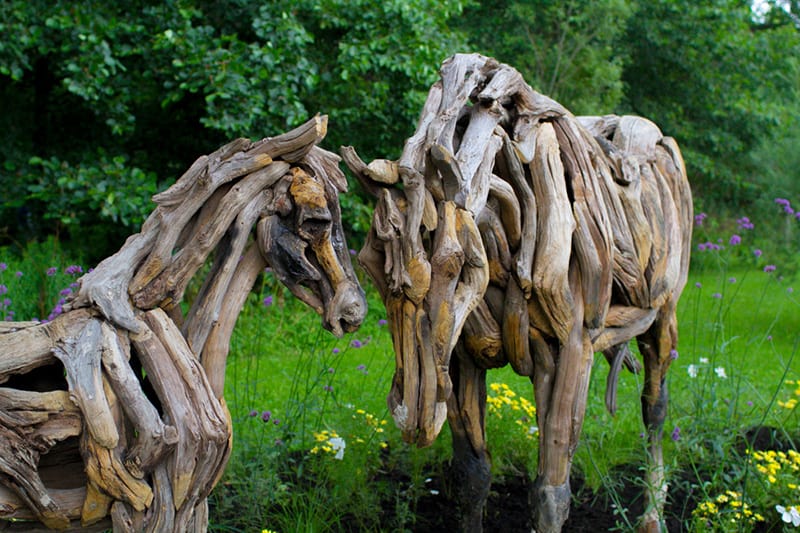 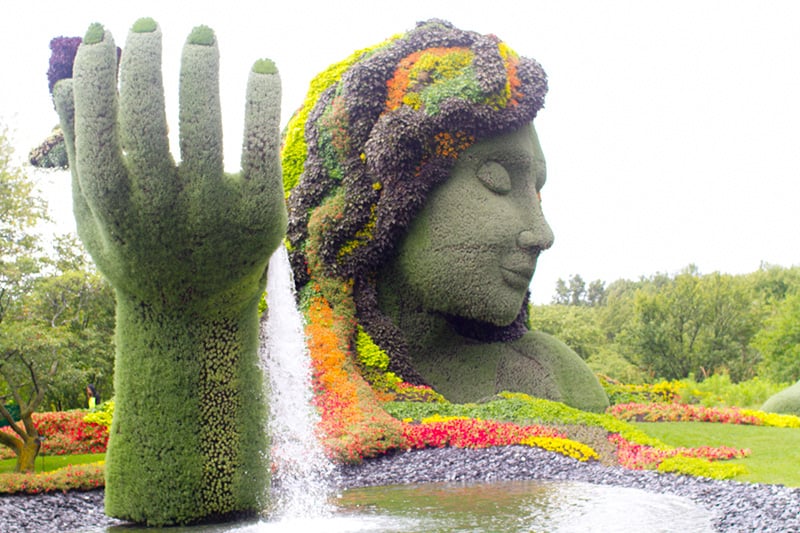 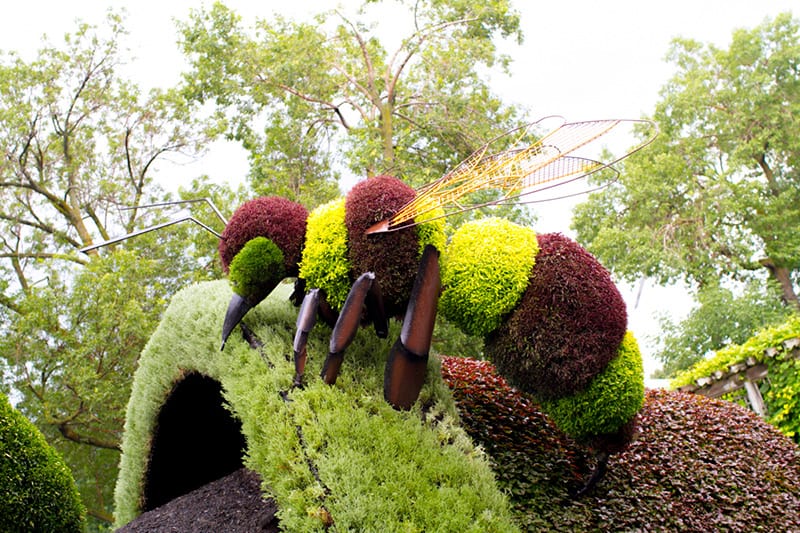 Then we spent the rest of the day walking around Montreal and i’m pretty sure we explored every inch of the place haha Anne was on a walking mission and we were all exhausted by the end of the day but it was SO worth it because we got to see so much amazing stuff! Montreal really is one of those cities that has so much character!

One of my favourite parts of Montreal was the gay district, it was fabulous! I mean seriously, so colourful and the entire street was lined with tons and tons of hanging pink ball balls! It was like Christmas but all the time! I particularly loved all the atzec decor over the tube station entrance! 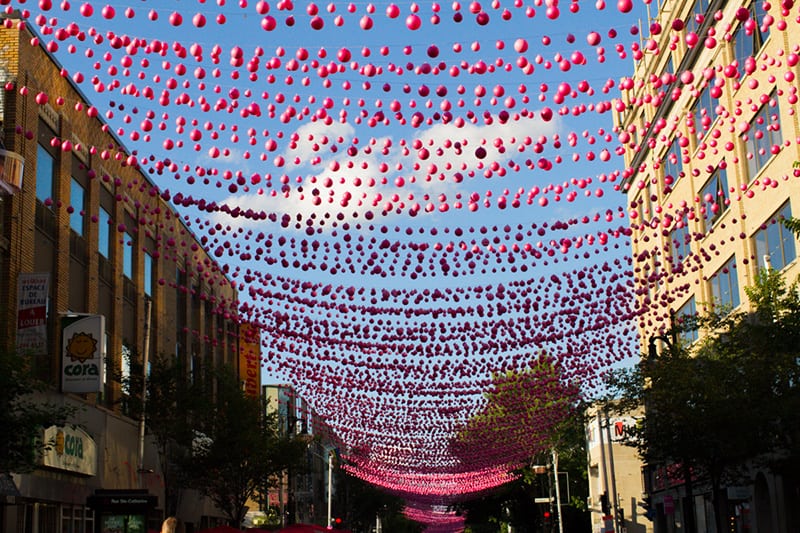 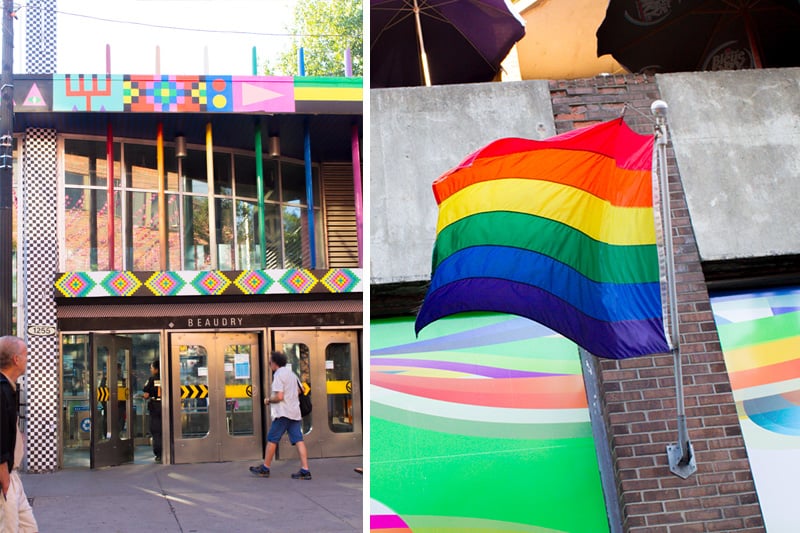 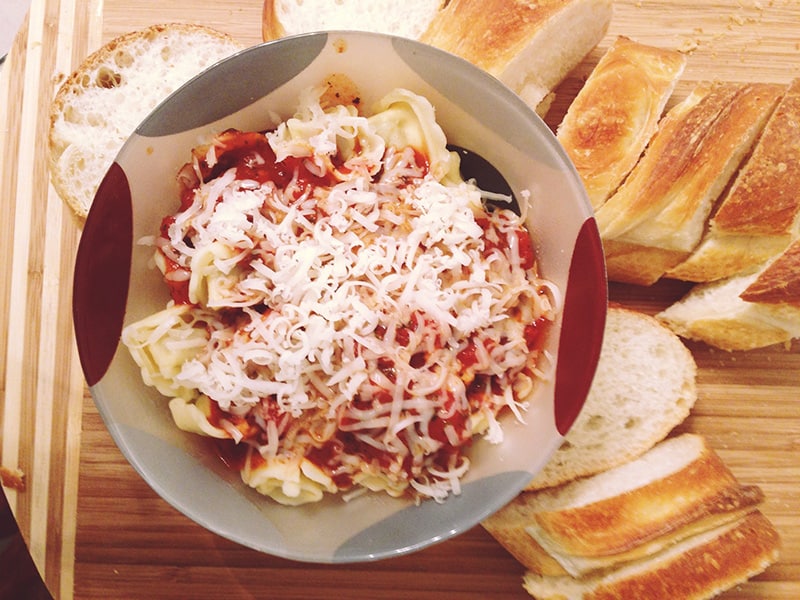 Once we finally got back into Anne’s apartment we indulged in some delicious homemade pasta, timbits (tiny little dohnuts!) and of course some amaretto! We also watched the Inbetweeners Movie because Anne had never seen it! It was such a hit haha 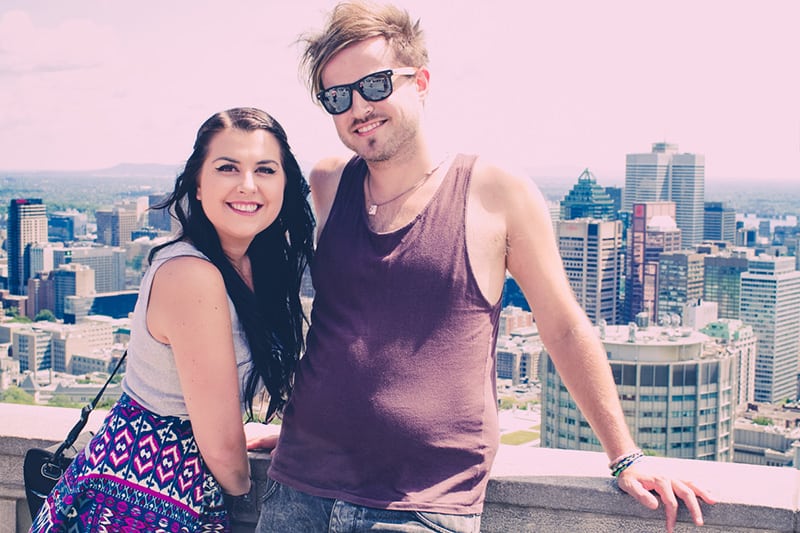 The morning of day 3 was tough. Purely because i’m so physically un-fit that my legs had seized up from the amount of walking the day before! How pathetic am I! And then it was announced that we were going on a hike up Mont Royal. A HIKE. UP A MOUNTAIN. Because it had the best view of the city! Dammit, I wanted to see that view but let me tell ya…I did not want that hike! So we’re getting pretty close to the top and my energy levels are at an all time low when all of sudden James turns to me and says ‘HOLY SHIT’…that’s the singer of Half Moon Run! Now if you read my Glastonbury Review you’ll know that we absolutely LOVED Half Moon Run there and seriously…what are the chances of us bumping into the main singer in the middle of Canada?! I mean REALLY, what are the chances?! The weirdest thing was that we had been playing their album that morning in the apartment! Nice little bit of Law Of Attraction at play there I like to think…Needless to say I had a sudden surge of energy to catch him up with James and have a chat! He was so lovely and friendly, we can’t wait to watch them play again in November! 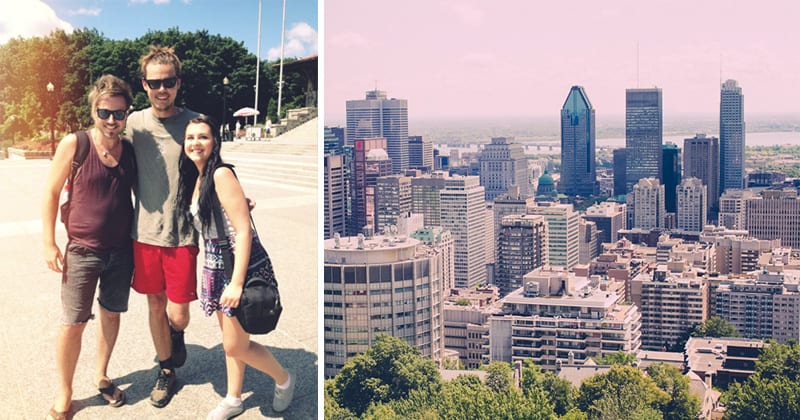 After we had calmed down (lol) it was time to explore Old Montreal, which was so cute! Again, there were a few cute stalls and artists around! One of James’ and Anne’s favourite stops in old Montreal was of course to get some maple syrup on a stick! It was the strangest thing, you had to squirt out the maple syrup onto ice and then roll it up onto your stick! Cray! (Yet totally amazing) 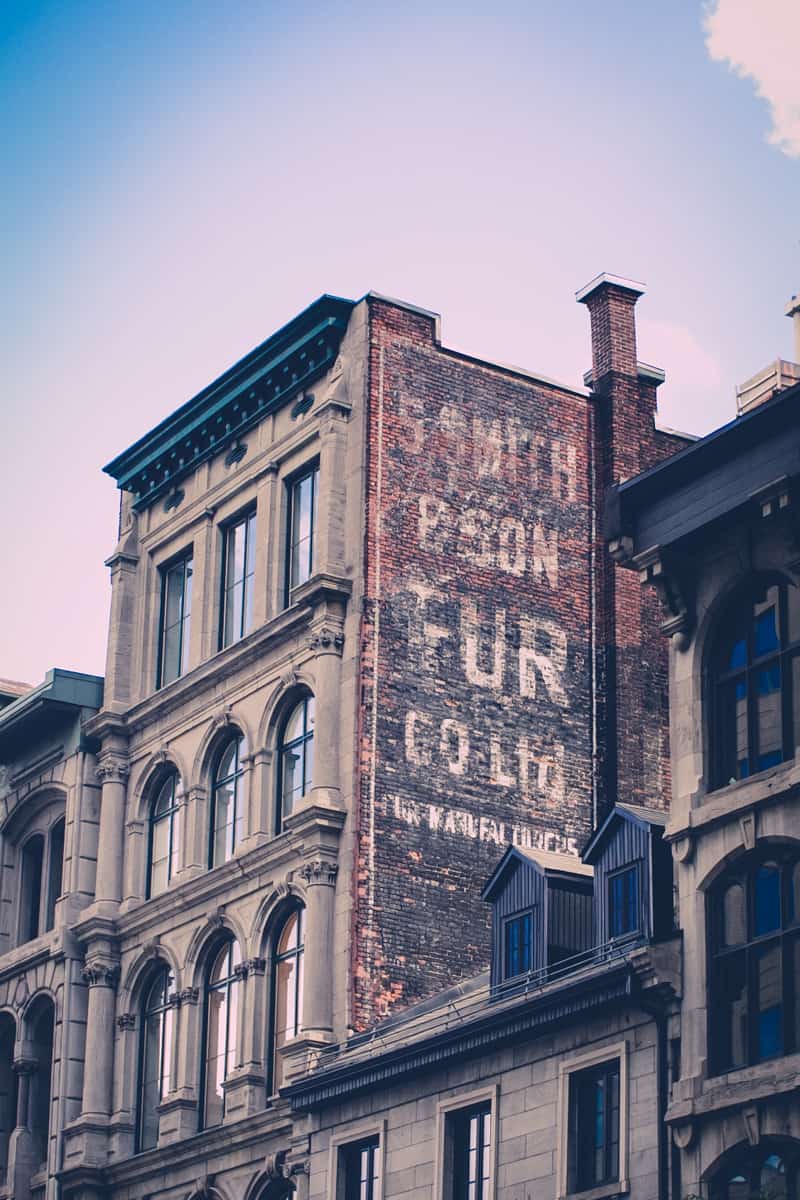 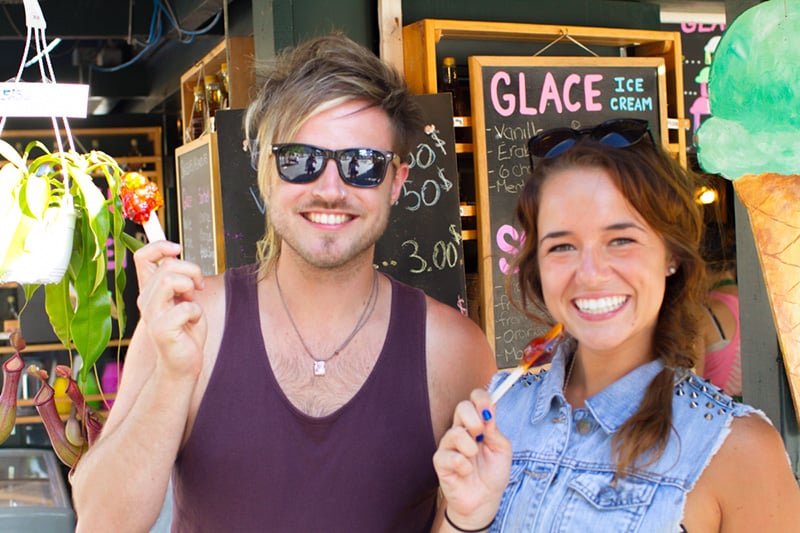 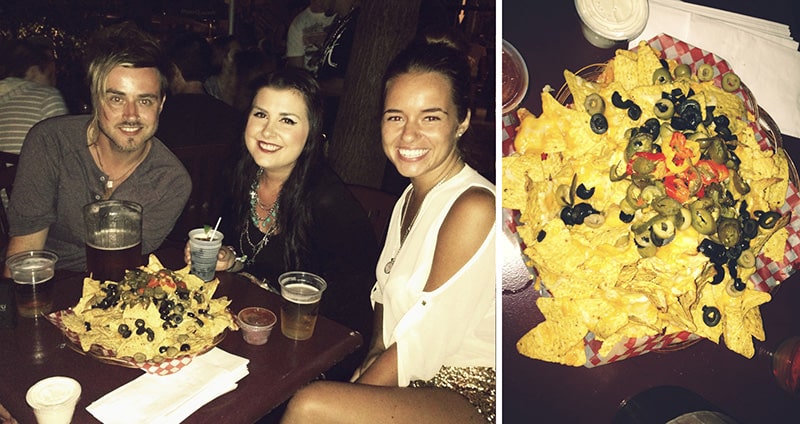 We then topped off our last evening in Montreal by hitting a bar for a few drinks (and nachos for mine and Anne’s memories of Mexico!) 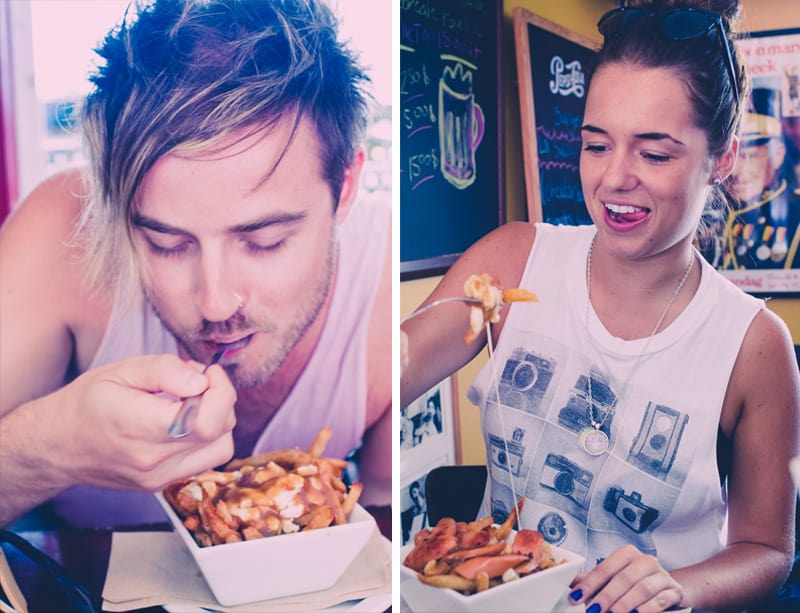 Cry face. Our final day in Montreal, we had a bit of a lie in then headed over to the bus stop to catch our bus back to Toronto. Not before stopping and getting some famous Poutine though! Poutine is essentially a bowl of chips…covered in gravy…and cheese! As you can see Jame’s first experience of this was a huge hit! Anne told us that this was their ‘after a heavy drinking session go to food’ so basically like us hitting the kebab shop or fish and chip shop at 2am haha. (Is it just me or does food always taste AMAZING when you’re drunk and starving?!) 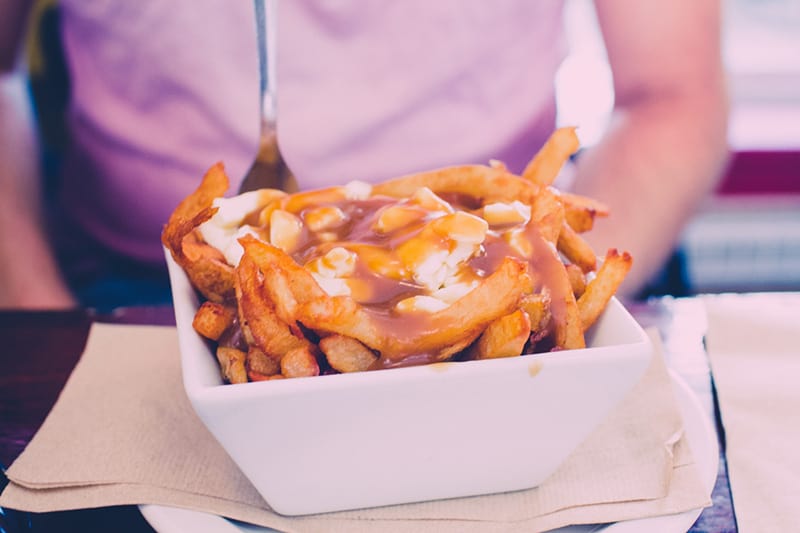 Have any of you been to Canada? I know some of our readers live there so I’d love some tips and hints on other places in Canada! Me and James would love to head over to the west coast next time we’re over there and explore some of Vancouver, etc!

The Best Weddingmoon Destinations in the Caribbean
November 19, 2022

Honeymoon in Spain: 3 Amazing Destinations For an Unforgettable Trip
April 19, 2022