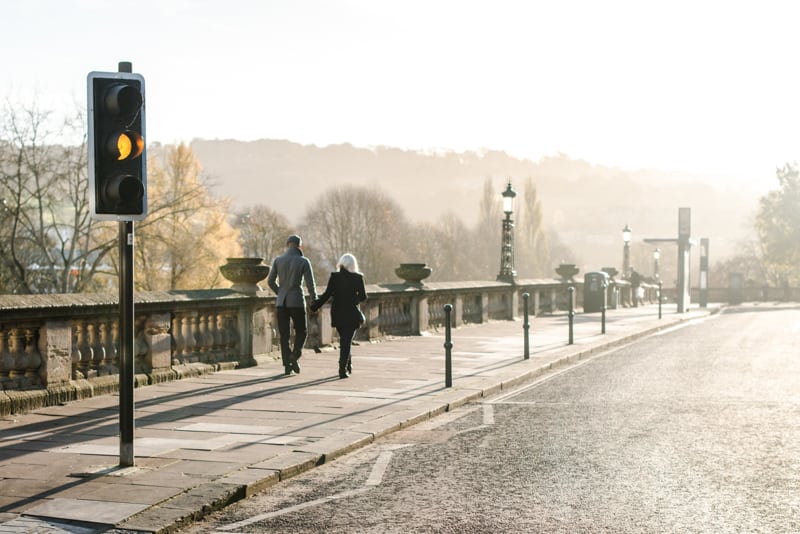 When this engagement shoot from Marcus, Big Eye Photography dropped into our inbox I simply could not resist showing you all, not only because I love Christmas (obviously) but because me & Emily love Bath so much! It’s a truly beautiful city with such fantastic architecture and cute little unique shops! We love how Marcus has captured not only the love of Becca & Alex but also the beauty of the city.

To start the day they all walked from the Spa, down Sydney Road and onto the beautiful Great Pulteney St. After a few shots there and a small diversion into a beautiful park they found, they headed for the Pulteney Bridge where Marcus ‘fully could not resist shooting into the sun and getting all moody!’ (his words not mine!) He then took a few more shots around the Christmas market and arcade before they all grabbed a mince pie and headed off for a few final shots in and around Parade Gardens. How fun does that sound?! The photos speak for themselves, but here’s Becca to tell us more about how Alex and her met, got engaged and why they chose Bath for their engagement session….

” Alex & I met back in April 2010. I was already living in a quiet cul-de-sac in Bristol and one day I had to take the day off work (which never happens!!) due to a migraine. Alex had just moved into the road and was making plans for his new bachelor pad (!) although at this stage I didn’t even know I had a new neighbour just 2 doors down. Little did I know that Alex had arranged for delivery of his new broadband from O2 and as luck would have it I was home to take the parcel from the delivery man and of course I was more than happy to help. Later that day there was a knock at the door and my sister who was visiting answered – I heard an exchange of voices discussing a parcel. I pranced down the stairs (this is how Alex remembers it now) in my Pyjamas expecting to see a neighbour I already knew – until I realised it was in fact a stranger…and a hottie too..and then proceeded to blush. It sounds cheesy but it was love at first sight, we stood talking at the door for ages and Alex asked me out a week later – the rest (as they say) is history. ”

“The day Alex prosed was A rare opportunity where I let Alex plan a surprise day out for Christmas Eve 2012 (I’m a complete control freak and like to plan and know everything!). We went to see panto at the Bristol Hippodrome – Aladdin, and then went for a lovely meal at Cosmo where after food, Alex got down on one knee traditional style and proposed in front of the restaurant. After a slight pause to recover from the shock, I said yes!”

“We chose Bath for our engagement shoot because it’s such a beautiful city with amazing architecture and lots of history. Alex and I have spent lots of time in Bath and had chosen the Macdonald Bath Spa hotel for our wedding after driving past it so many times and always saying ‘One day we should stay there’ as it seemed such an amazing place. It seemed the perfect spot for an engagement shoot as it had such a lovely setting and meant something to us personally as this is where we would soon be married.”

Sooooo cute and so beautifully shot by Marcus Ward, we wish Becca & Alex all of the best for their wedding ON CHRISTMAS EVE!! That’s right, that’s what I said! What a festive and awesome couple!! And of course, we wish them all of the love int he world for their future!

AN INTIMATE AUSTRALIAN WEDDING WITH A SURPRISE KOALA GUEST!
November 17, 2021