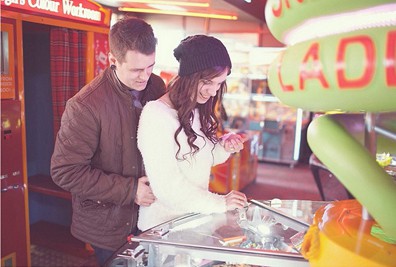 Ricky and Co got engaged whilst on holiday in Cuba. They asked photographer Darren Mack to do an engagement shoot at Whitby pier as this is where the couple spent Co’s s 21st birthday playing miniature golf. Darren Mack has completely captured how in love this couple were, they cant seem to take their eyes off one another.

Who would have thought all it took for this couple to declare their undying love for each other was the Rocky Horror Show and a crate of Stella?

” We met when I was in my first year of university. I lived with a girl who was going out with Rickys friend. I remember him coming to visit his friend one day and him being out so I made him a cup of tea and sat chatting with him for a while. I thought he was really hot but I was already seeing someone else.

A few months later I broke up with my boyfriend and was hanging out with Ricky as friends. He used to come round and watch TV and we would go to the pub together. I suppose we officially got together one night after we drank a crate of stella and watched the rocky horror show and decided to admit how we really felt about each other. That was about six and half years ago!

We had been talking about getting married for a while after we bought our house but were in no rush. In June 2013 we were looking at going on holiday and decided to go to cuba for two weeks (it was awesome defo recommend it). I was so excited about the holiday but three weeks before we were due to go I had a fall and ended up on crutches. We decided to still go on the holiday and it was fun being wheeled around manchester airport.

When we arrived in Cuba everything was perfect, the most beautiful place we had ever been to, looking forward to two weeks together in the sun. We really appreciate our holidays together since Ricky works away and I work long shifts for the NHS we often go long periods without spending any time together. The hotel staff had left a bottle of cuban rum in our room and since I was still on crutches and was struggling with them in the heat we decided to crack it open and sit on our balcony the second night we were there. While there we chatted vaguely about our future.

While we were sitting on the balcony the heavens opening into tropical rain so we dashed inside. When we were inside we got set up on the sofa with the TV on. Next thing I knew, Ricky was down on one knee on the tiled floor proposing!! It was the standard ‘will you marry me?’ no long speech but it was perfect. Ricky let me chose my own engagement ring as I have very small hands and had no clue what I wanted. When we landed back in the UK we went straight to the jewellers and I picked my gorgeous Vera Wang engagement ring.

We chose Whitby for our photoshoot as it is where Ricky grew up and went to school. He holds whitby very close to his heart and knows all of the best spots for photos! Whitby is special to us as a couple as Ricky took me there on my 21st birthday and we played mini golf and walked to where he used to live in the house his parents built by the river. It’s now become a tradition that we play mini golf on my birthday and wherever we go on holiday! It can get quite heated though as we both desperately want to win and occasionally accuse each other of cheating! ”

We wish Co and Ricky the best of luck with their wedding this December and well done to Darren Mack for doing such as ace job with the photography. If you haven’t already checked him out, you really should, he is currently offering a fab competition especially for our Bespoke brides.