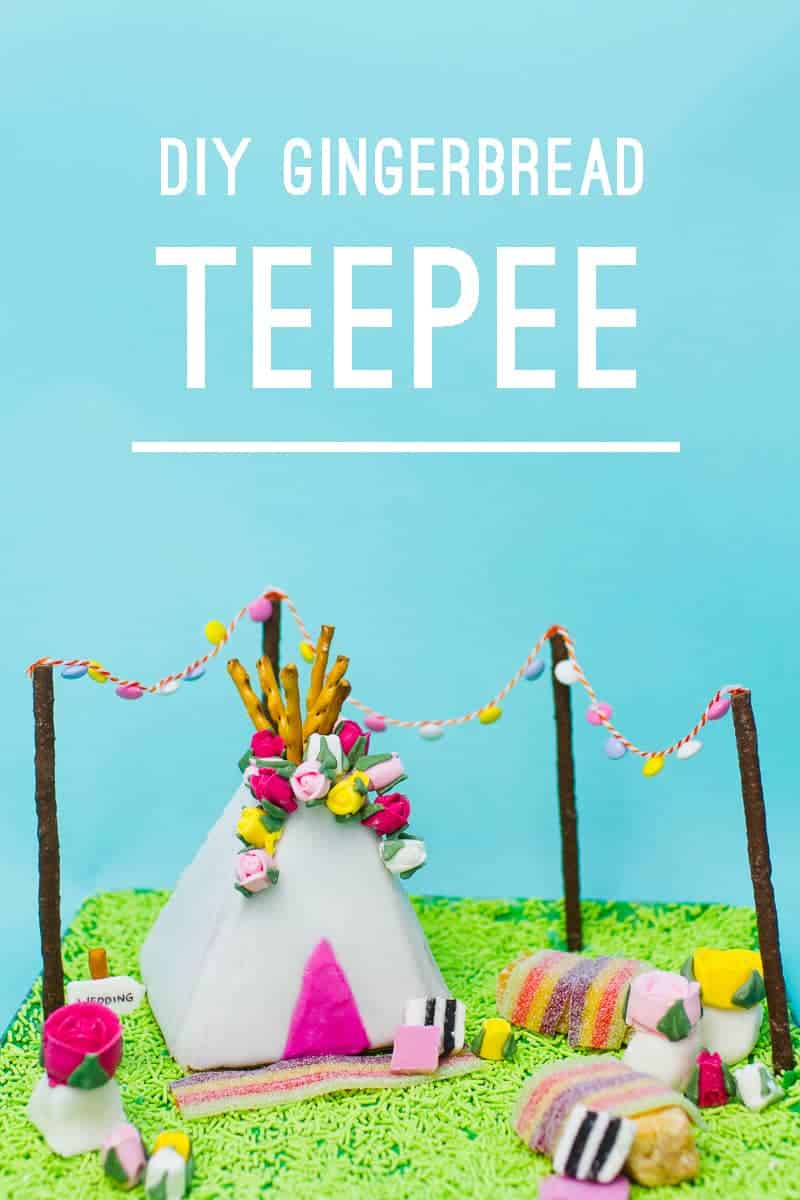 I have to admit, I love gingerbread houses as much as the next gal but the actual baking of the gingerbread house and assembling of it is something that kinnddaaaaaa stresses me out! But who wants to miss out on the fun of the decorating the house?! Not me! So…this year I was thinking, what I could bake that would be really simple and easy and would allow me to get creative with the decor?! Then it hit me, a gingerbread teepee!! 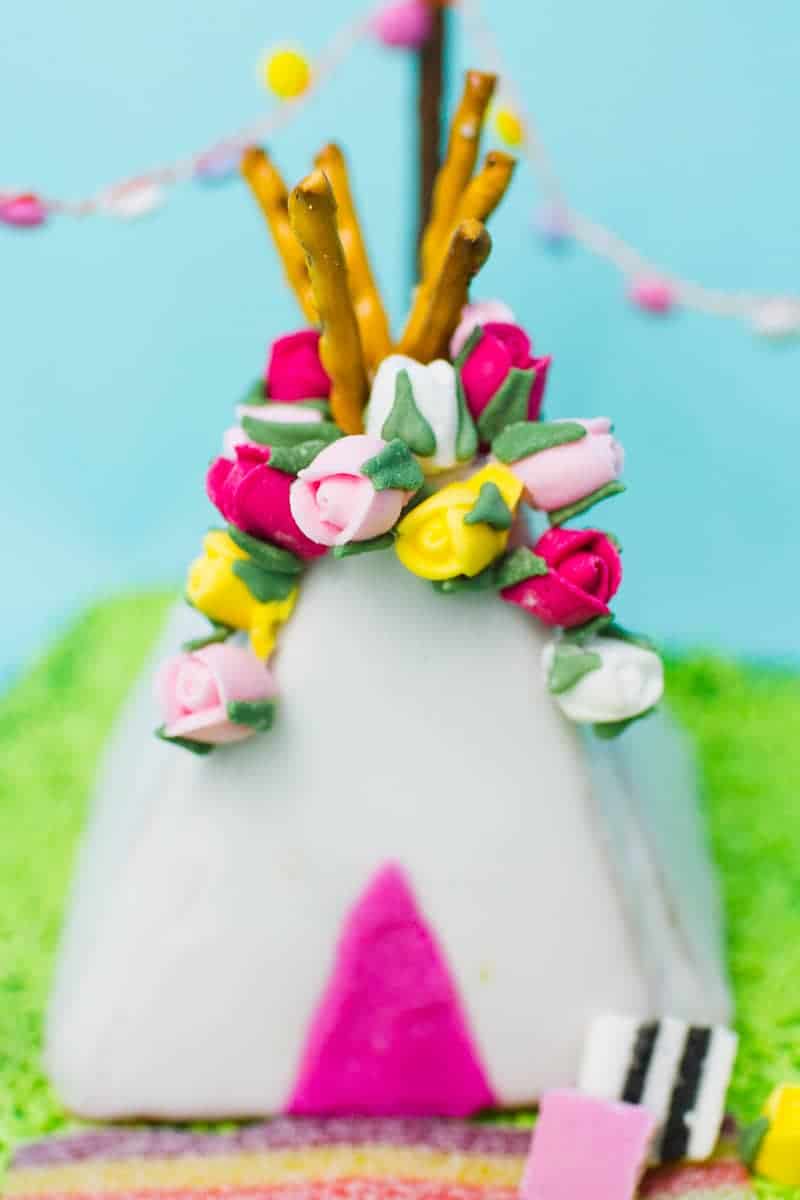 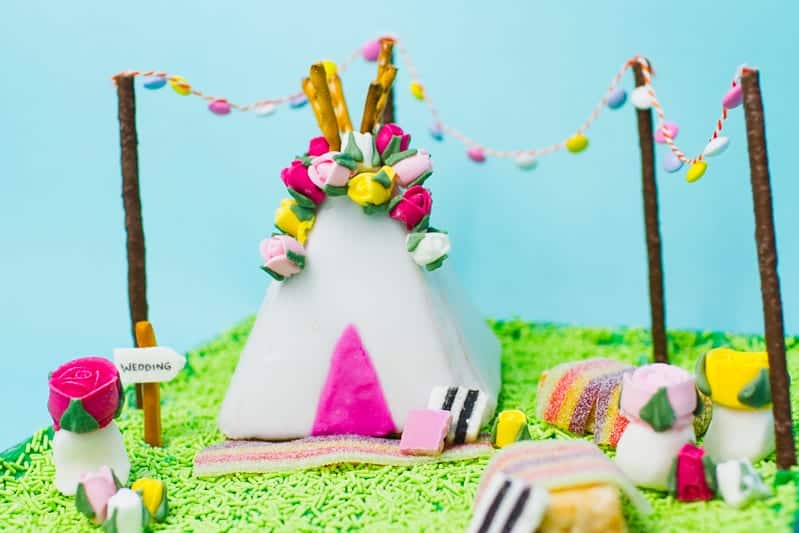 I would literally only need to bake four triangles, and that would be it! No cutting out of windows, or trying to assemble rooftops, it was the perfect plan! So I set the wheels in motion to get the idea moving! I did some research online, and wrote down everything I needed that would require as little baking and fiddling as possible and it really was much much simpler than it looks! Here’s how to make your own… 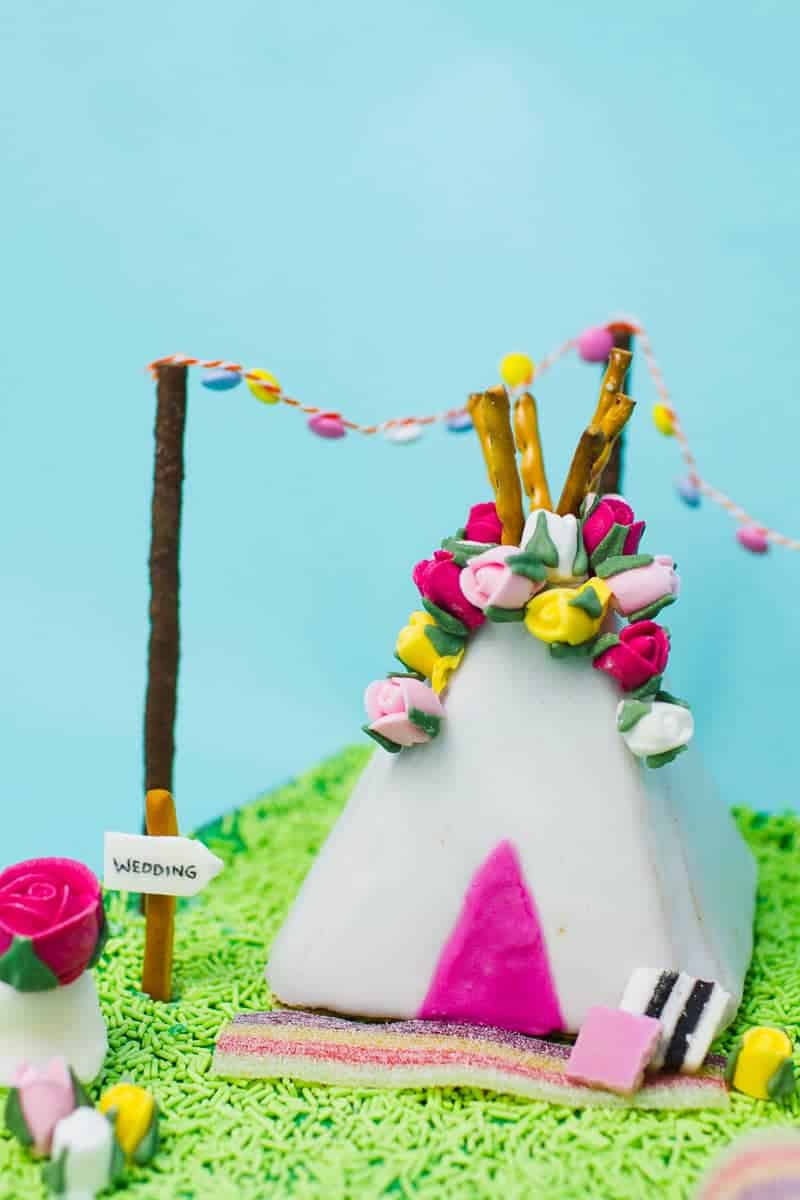 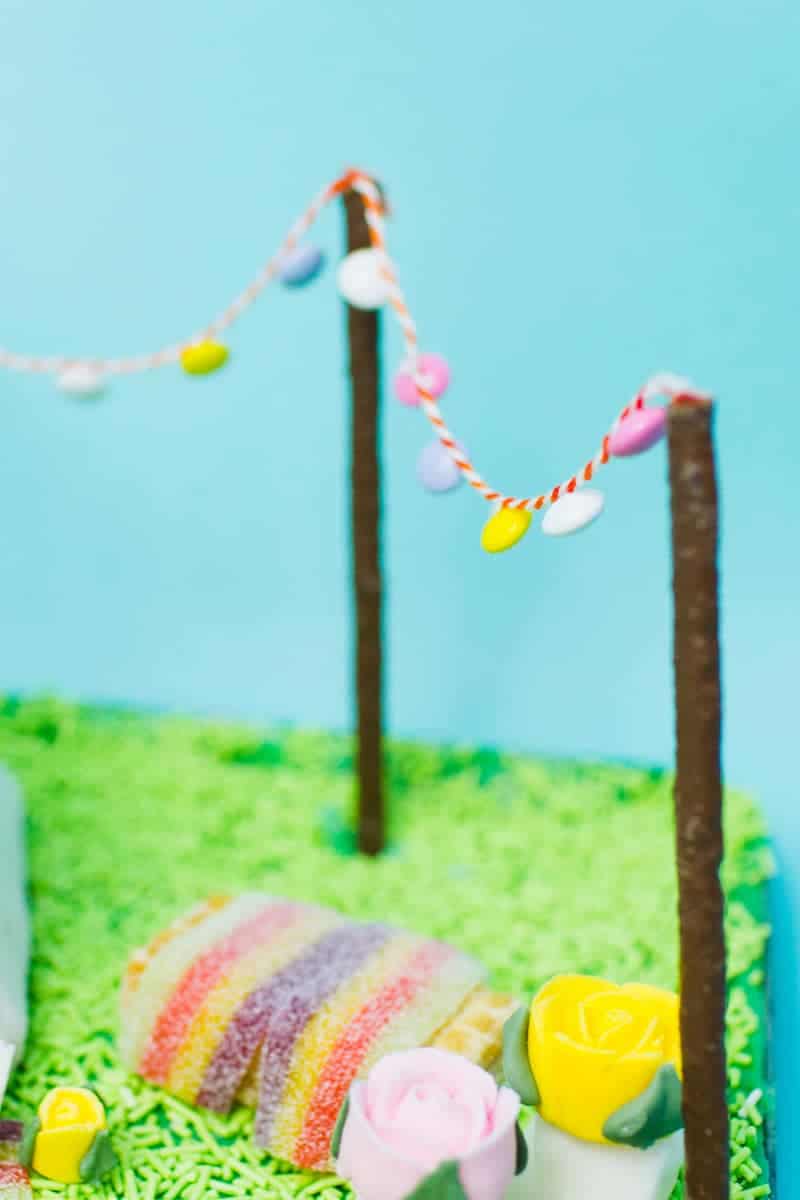 Melt the butter, sugar and syrup together in a saucepan. Meanwhile, mix the flour, bicarbonate of soda and ground ginger into a large bowl then stir in the butter mixture to form a dough.

Roll out your dough and cut out lots of triangles, I ended up baking around 15 triangles in total so that I could pick the best 4 or have spares in case anything went wrong! Plus it meant afterwards I had some spares for cookies! Once you’ve got your triangles, cut off about 1cm of the top of each of them, this is so there will be a little space for pretzel sticks to stand out of the top of the teepee. 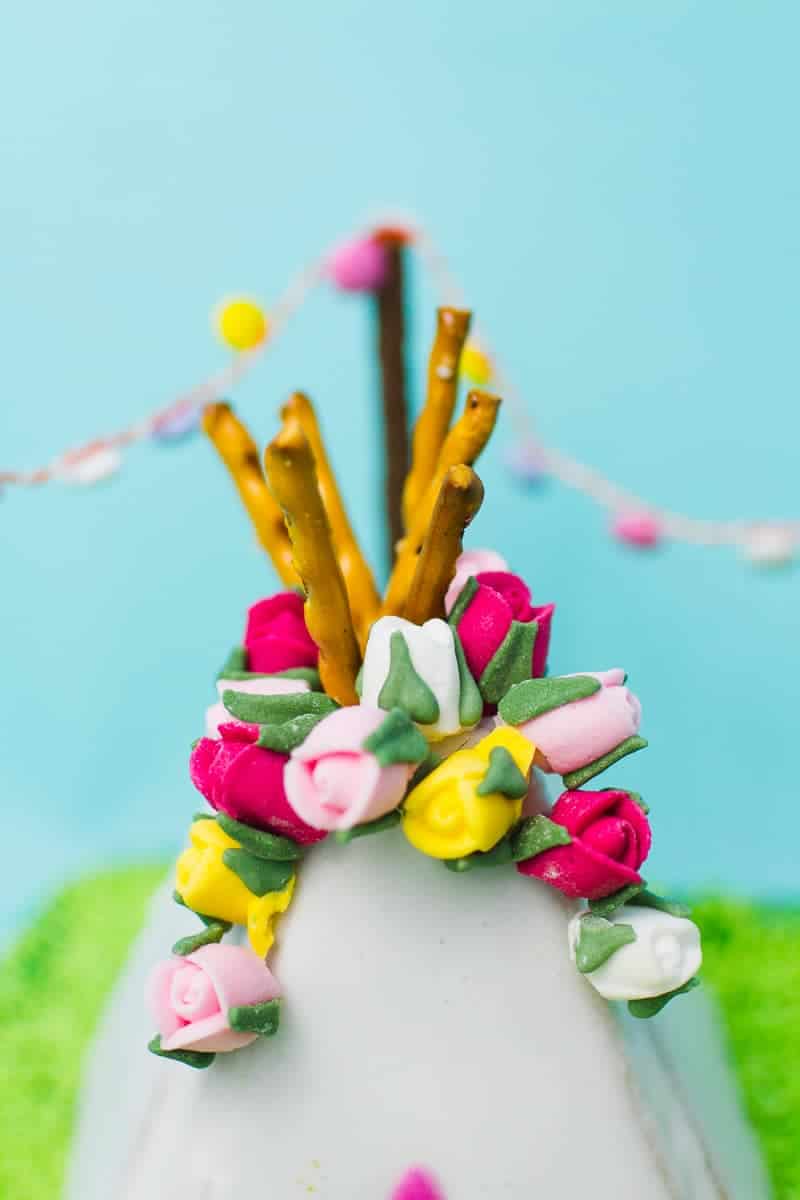 Bake in the heated oven (200C or fan 180C) for 12 minutes or until firm. Then pull out of the oven, leave to cool for just 1 minutes then trim the edges of the triangles so that they’re really straight. Then leave to cool fully.

Once the triangles are cool it’s time to decorate them! Mix together your egg white with the 250g of icing sugar and pipe your white icing onto your four best triangles, being sure to leave a small triangle out at the front of one piece for the door. Once this has dried, scoop out a very small amount of your icing and pop in a separate bowl, then add a small amount of your pink food colouring. Then pipe this into the triangle you left for the door. 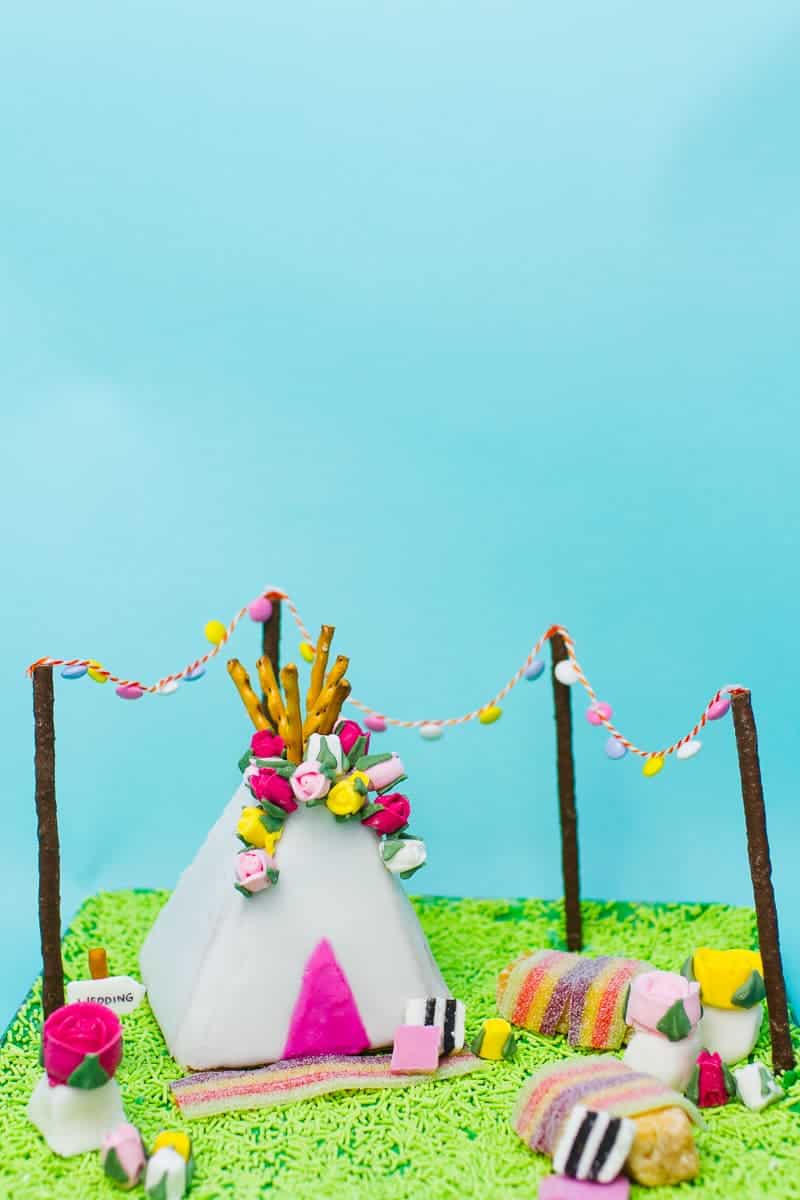 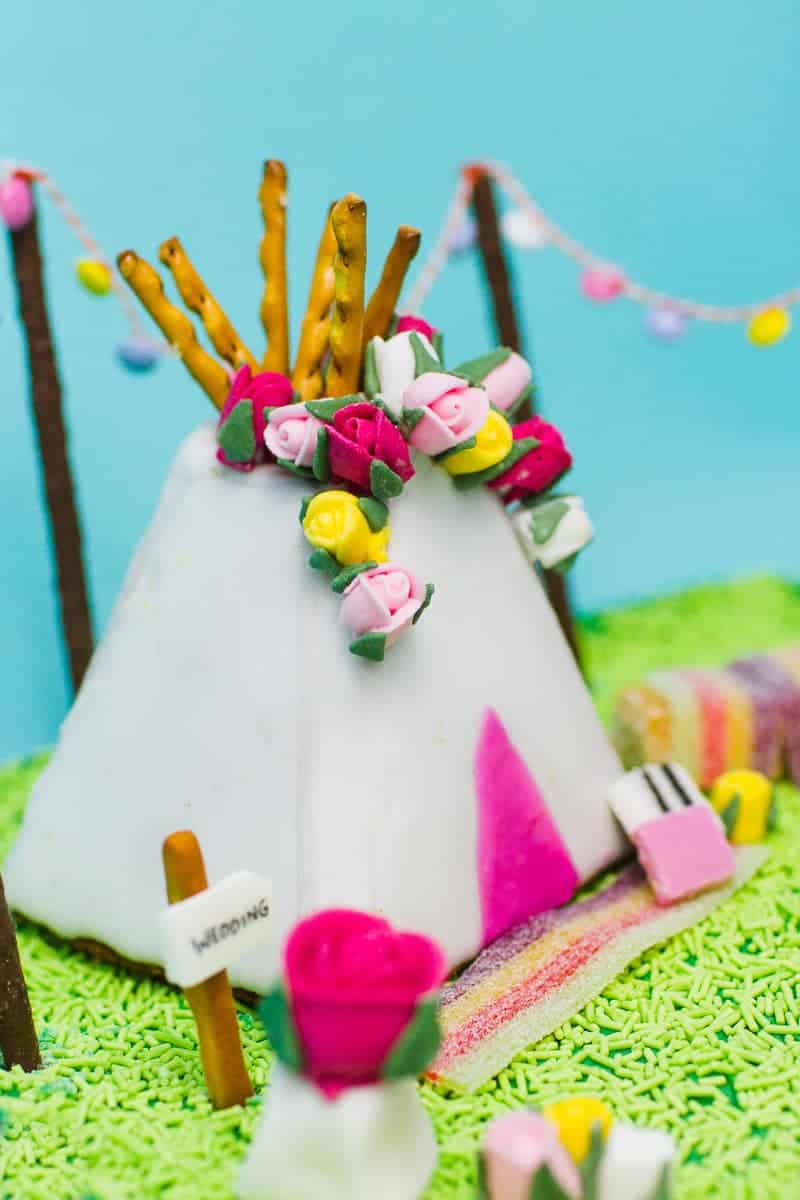 Finally, it’s time to assemble! Using the white icing you have left start to pip the edges of your triangles and assemble them into a teepee shape, I found it easiest doing this around a shot glass so that the pieces could lean against the glass and have the support until the icing had dried.

The base: I used the lid of a tin box and filled it with rolled out green fondant, I then added the light green sprinkles on top to create a grass effect!

The teepee: Pop your teepee on top of the fondant base and then simply pop your pretzel sticks in through the hole in the top, I used 6 sticks then used the left over icing sugar to add the edible flowers to edges of the front of the teepee.

The hay bails: Take a knife and cut little lines into your fudge to create a criss cross effect, then add your rainbow belts over top for the blankets! I also popped a rainbow belt outside the teepee for a rug effect. 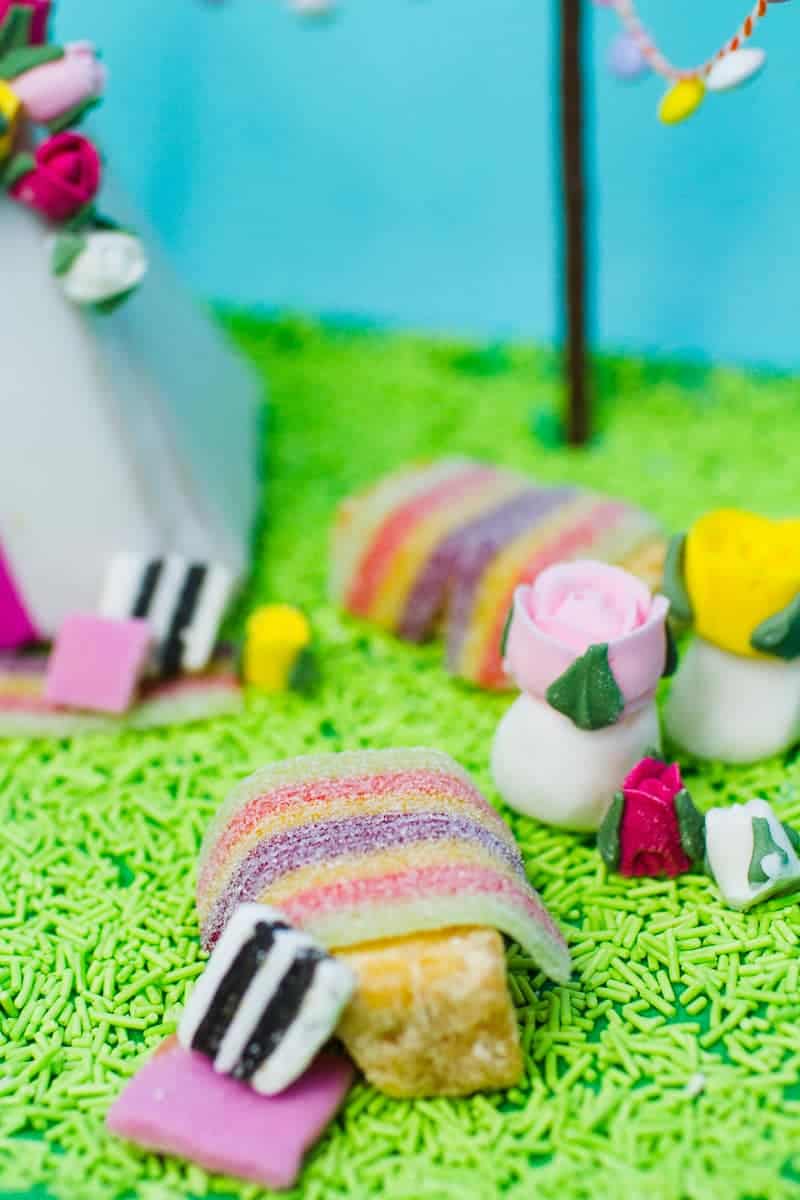 The cushions: Cut your old fashioned sweets into small squares to create your little cushions then dot them on top of blankets and up against the hay bails.

The sign: I wanted to put a slight wedding spin on this gingerbread house to using I cut up one of the old fashioned sweets into a little sign and wrote on it using a biro. Obviously that does mean this part is non edible but I’m sure there are edible cake decorating pens out there if you wanted to use them on the sign, I then used the icing sugar again to stick it to a small pretzel stick. 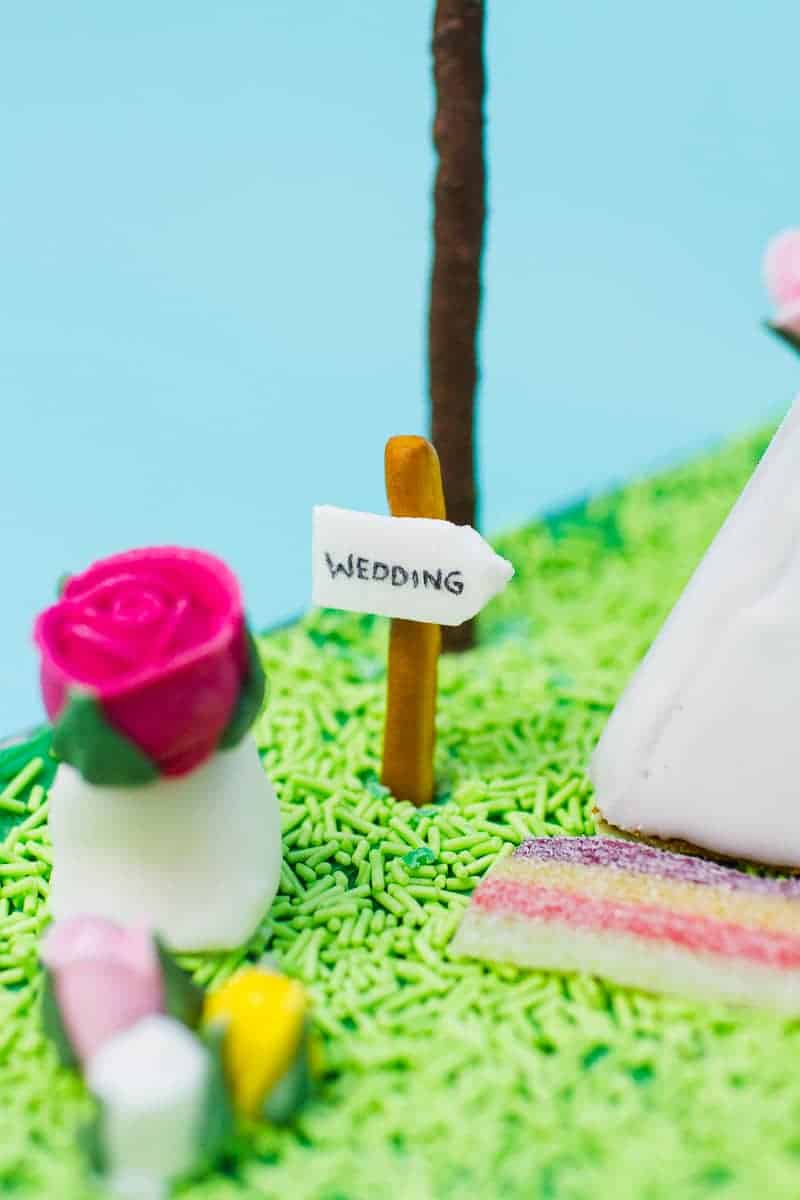 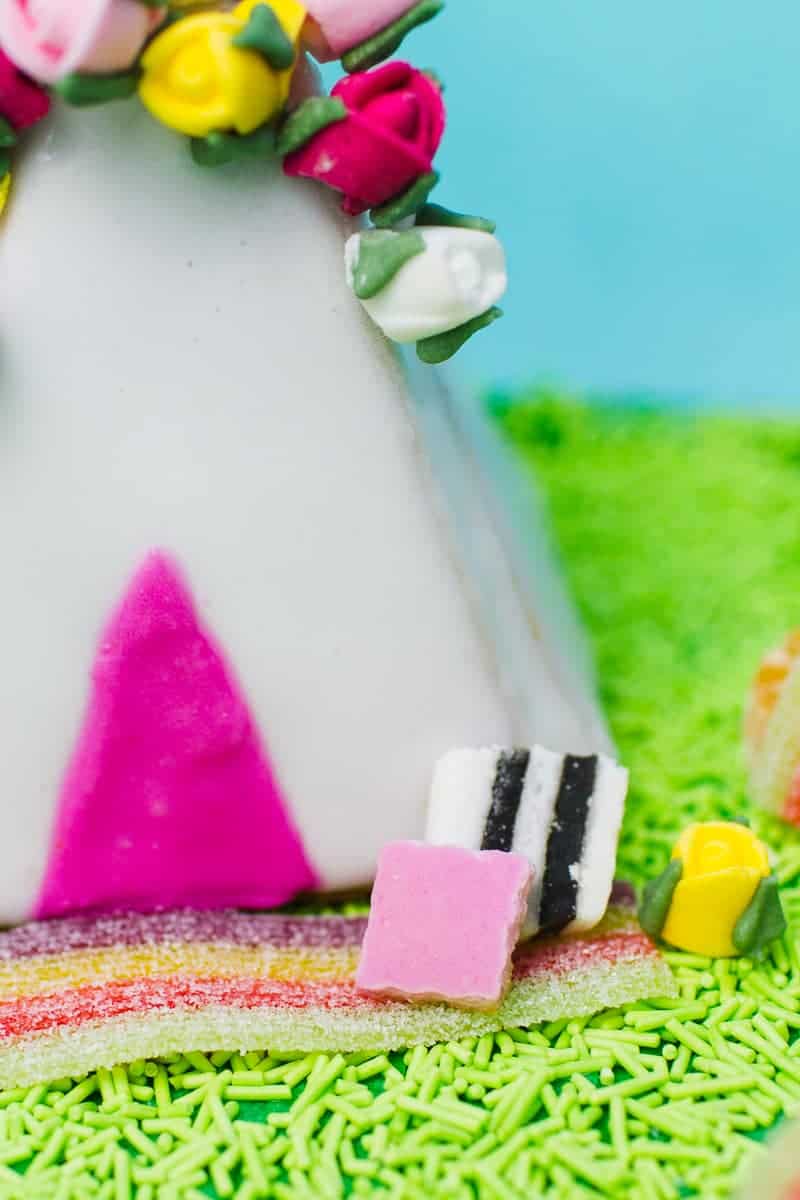 The lights: These were made by glueing tiny chocolate covered sweets onto some twine then glueing them to matchsticks around the teepee. Again this does make this element inedible.

The flowers: I thought it would be cute to add a few more flowers around the grass area so I dotted a few small roses around and then used the white fondant to create little vases for the really large flower heads.