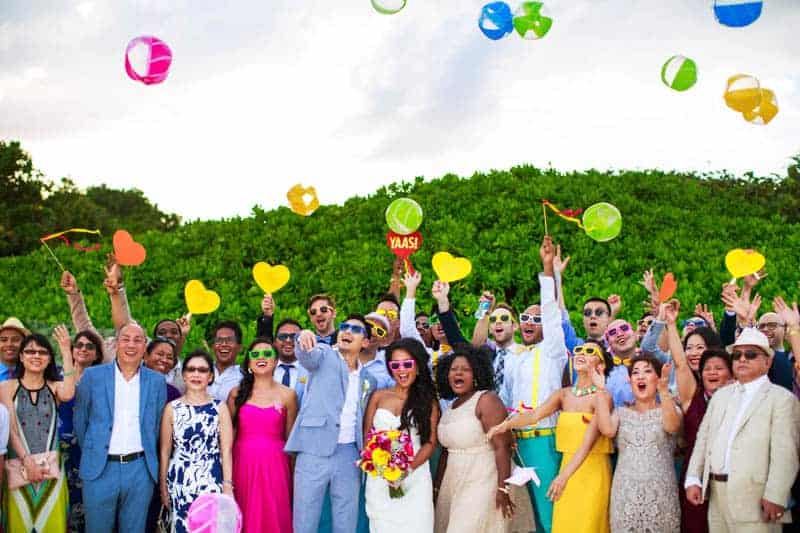 Ron and Veronica met while backpacking solo across South East Asia in 2009. Fate sat them across each other on a bus tour to Ha long Bay, Vietnam. Soon enough, they discovered their shared passions for travel and adventure and ultimately decided to explore Vietnam, Cambodia and Thailand together for the next month. Although they were separated by ocean post-trip, Ron and Veronica maintained a long distance relationship for two and half years between their native hometowns of New York City and London. Two years later, Ron took Veronica on an impromptu anniversary trip to Bangkok, Thailand and proposed at Banyan Tree’s Moon Bar, where they had their first date.

Based on the circumstances of how they met, there was no question that Ron and Veronica would have a destination wedding.They decided to pick the Banyan Tree Mayakoba – easily accessible between their families from New York and London and in honor of the same hotel chain where they had their first date and engagement proposal. 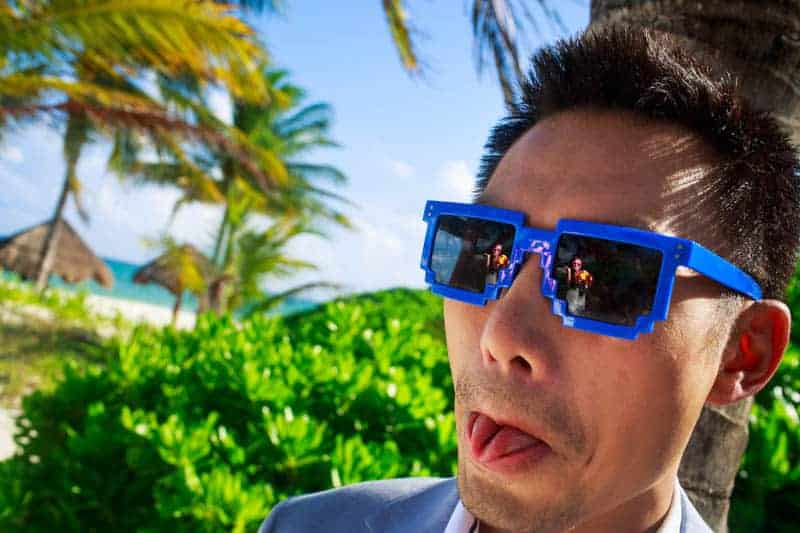 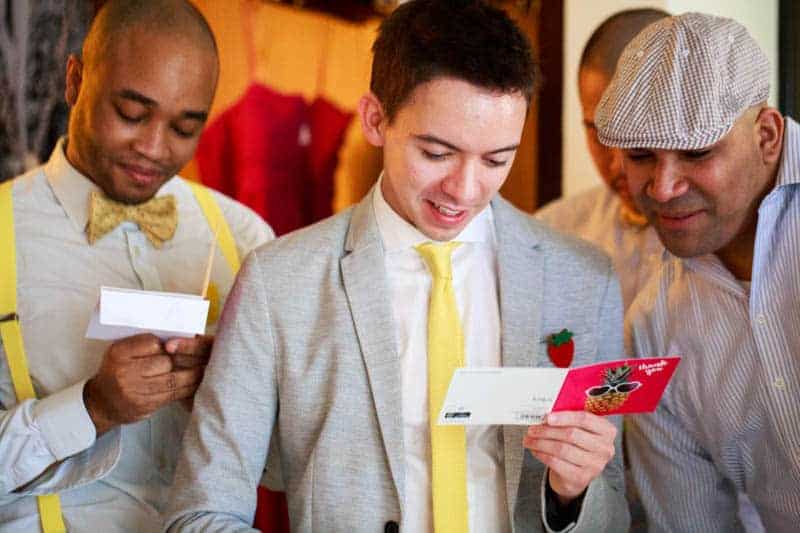 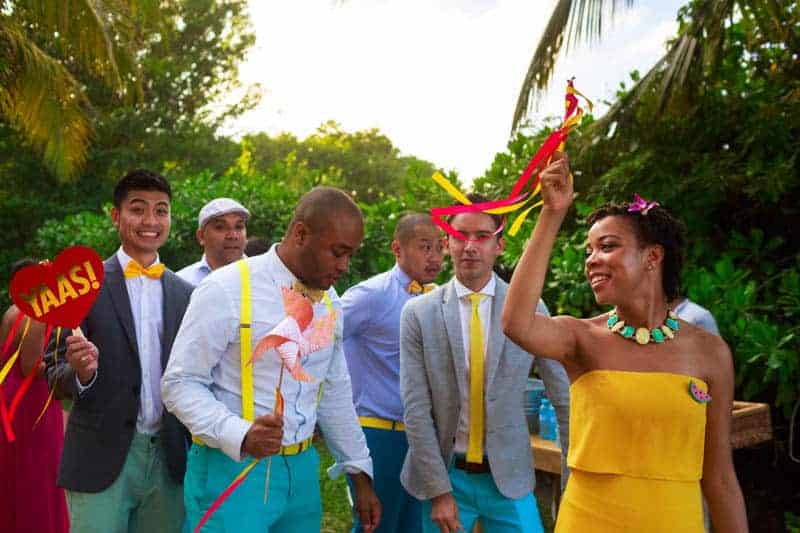 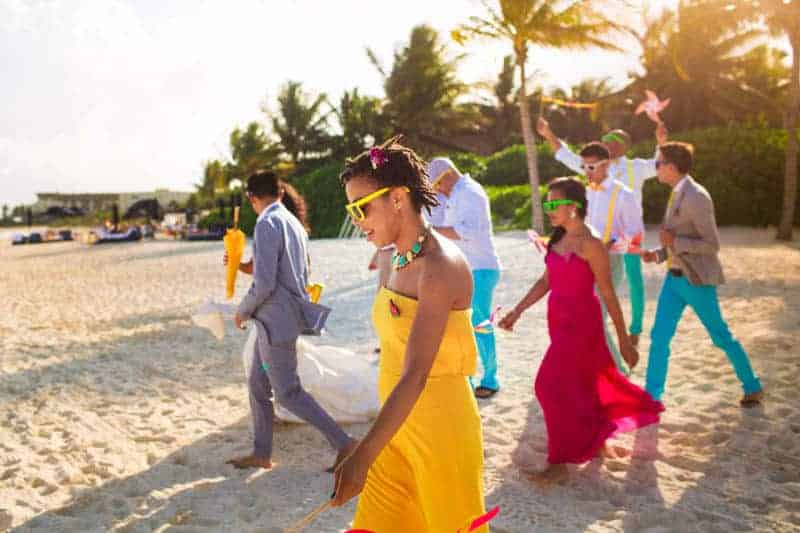 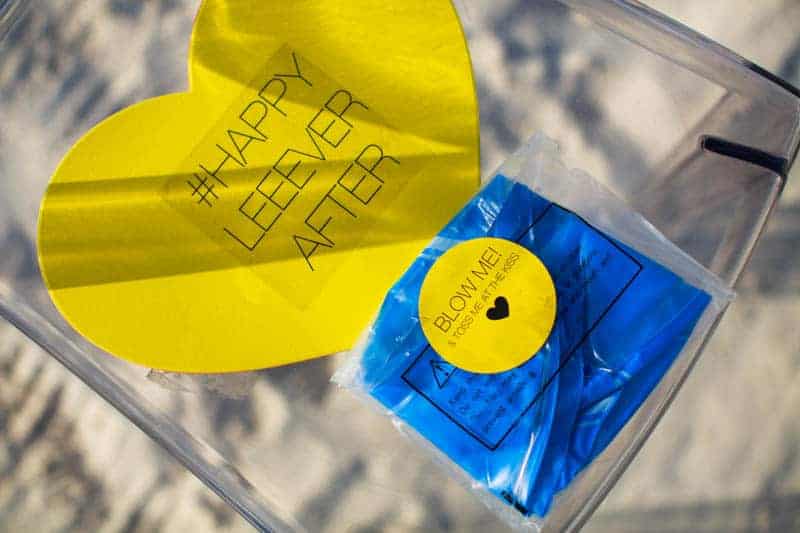 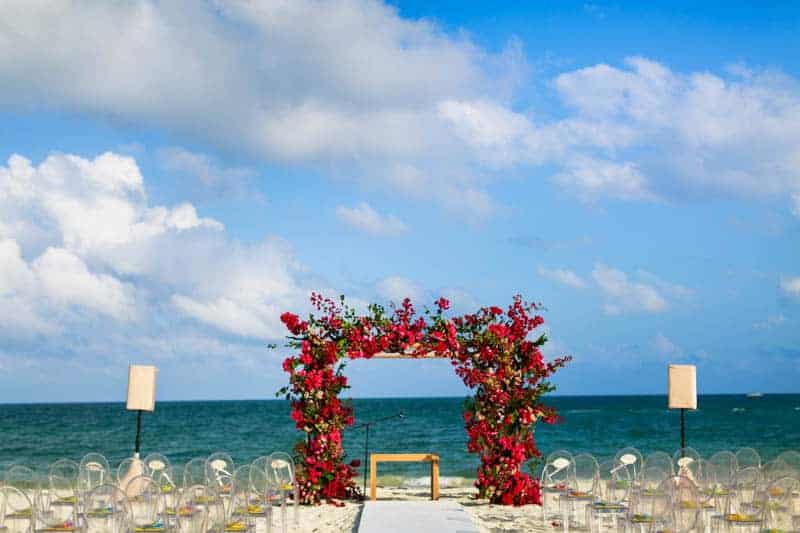 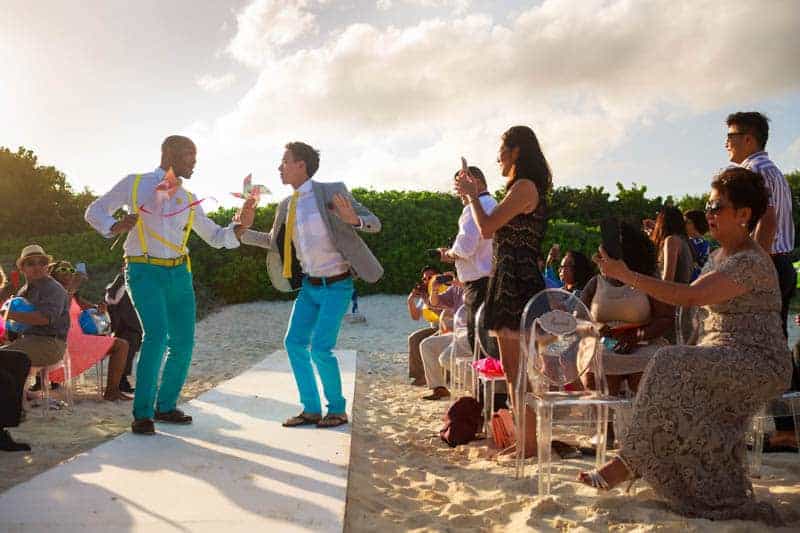 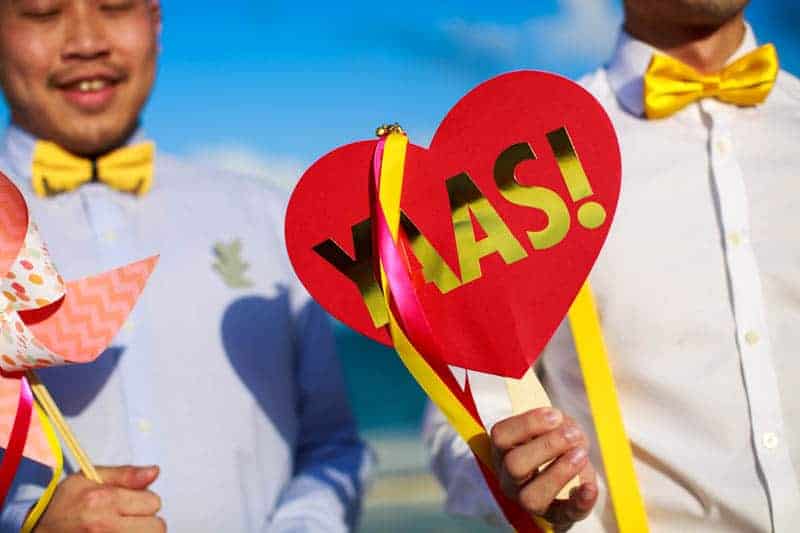 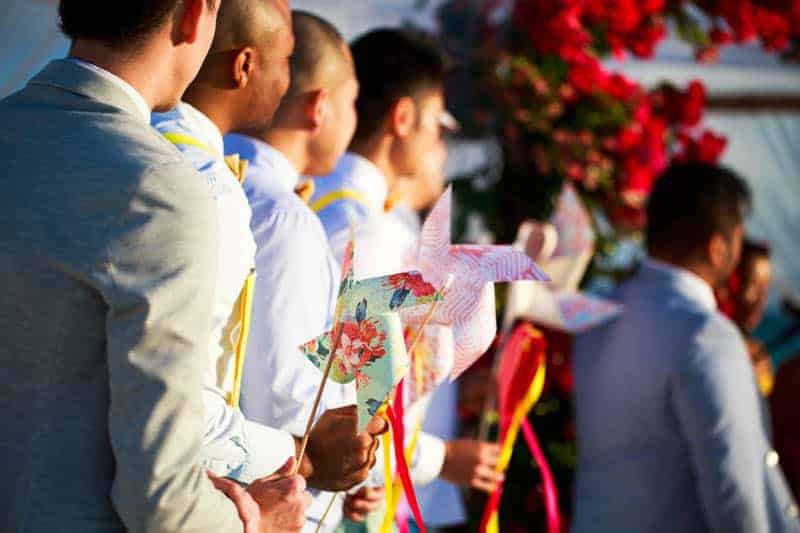 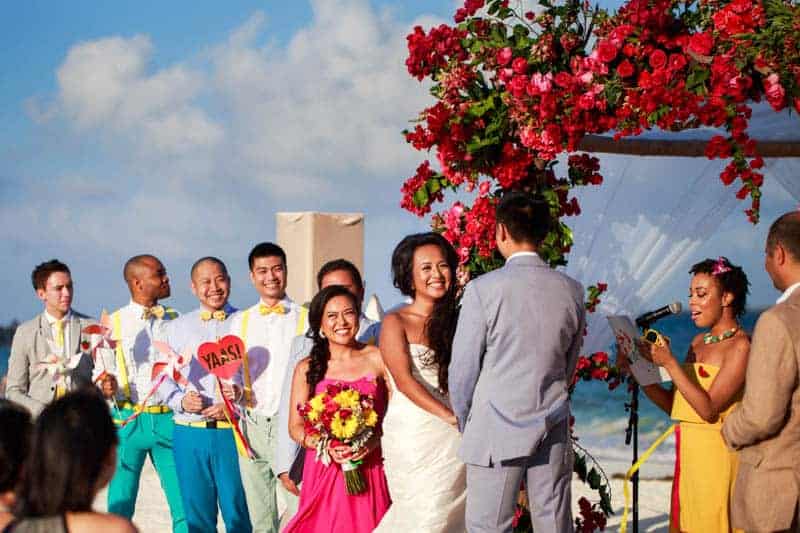 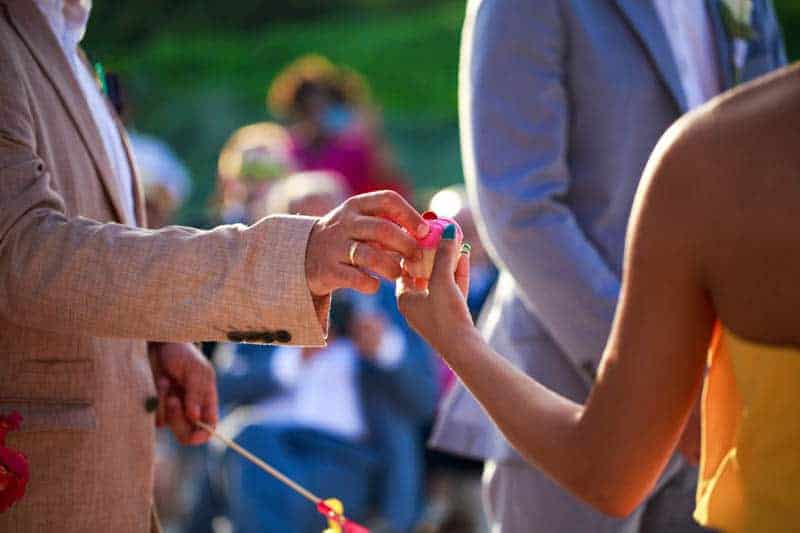 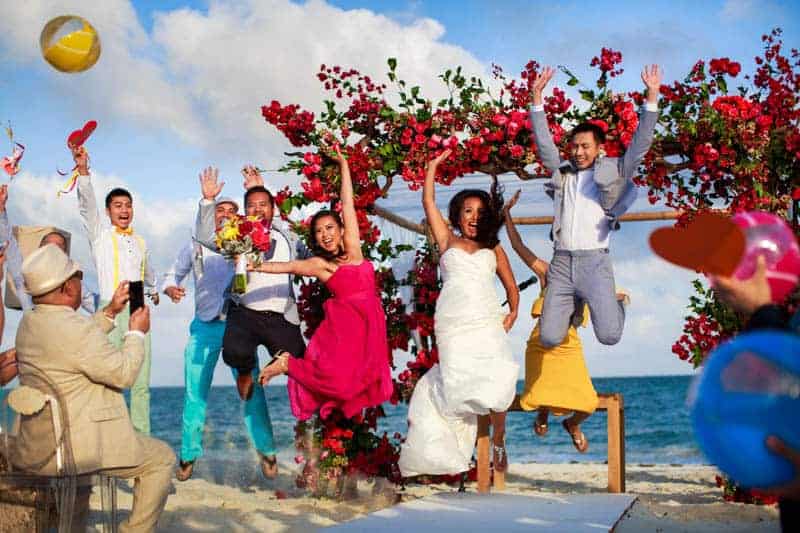 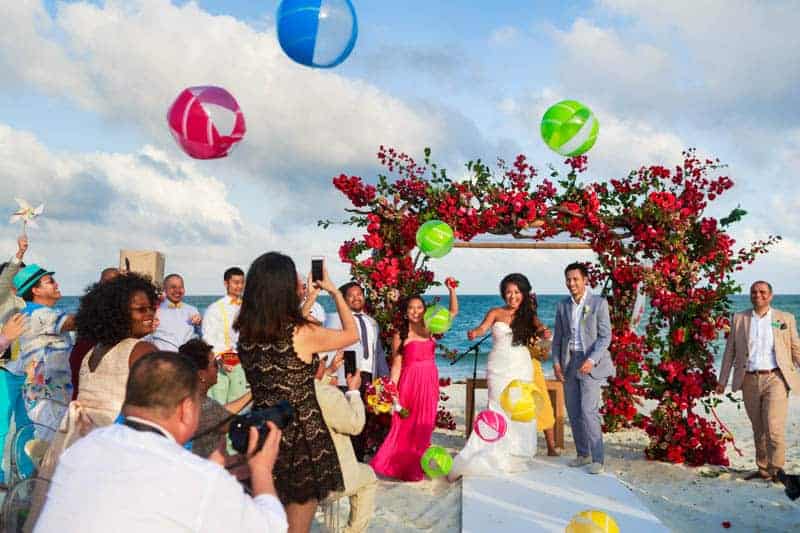 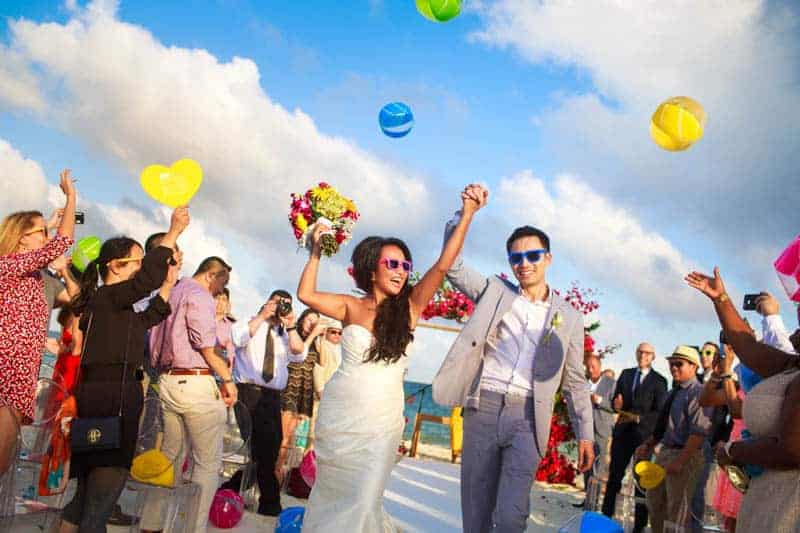 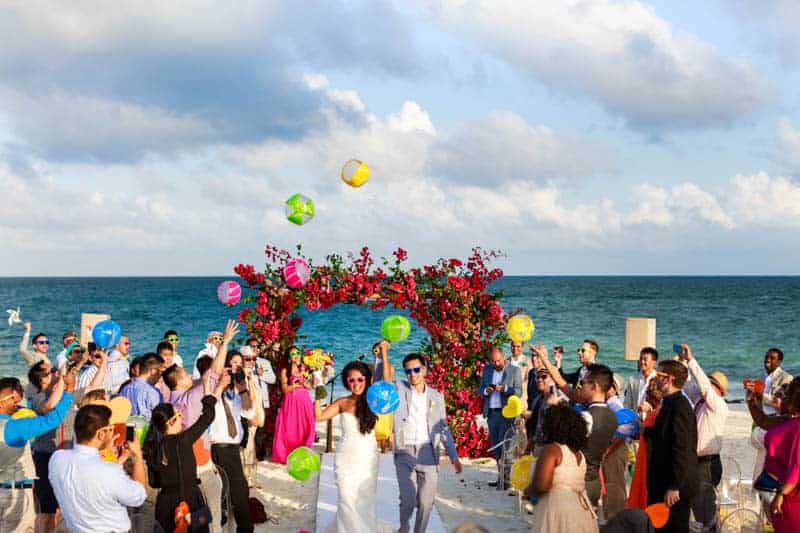 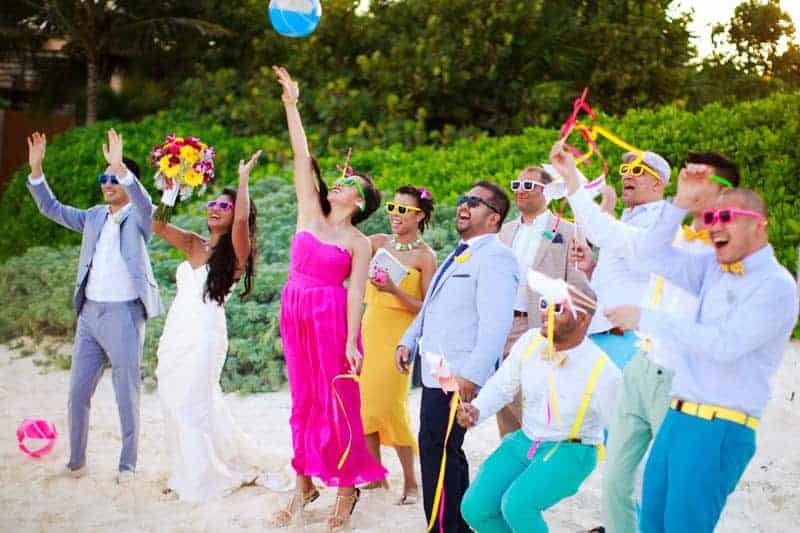 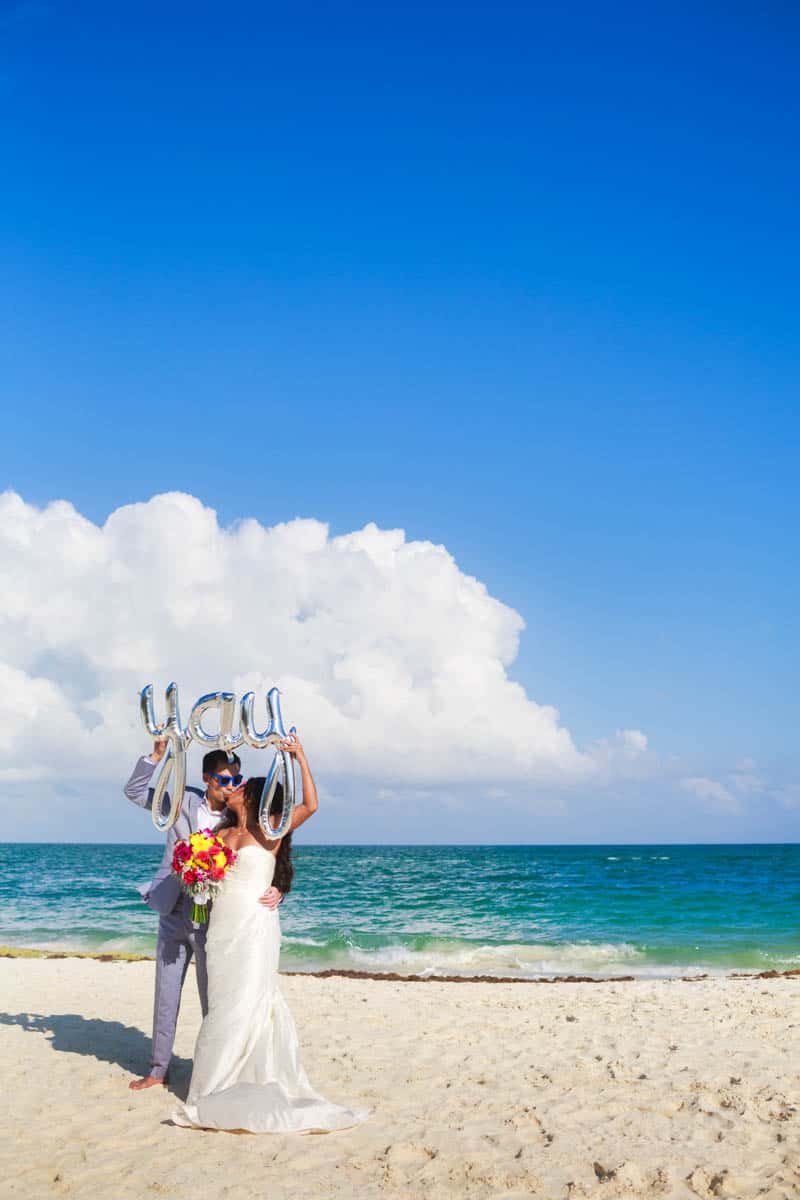 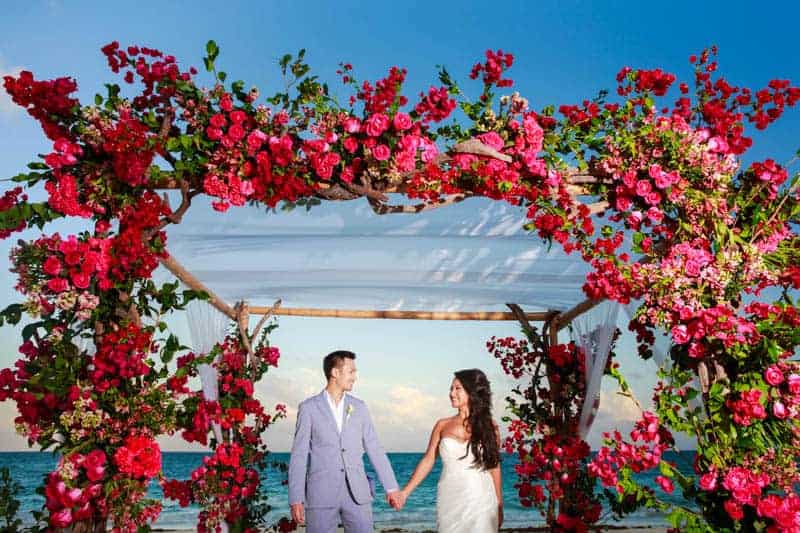 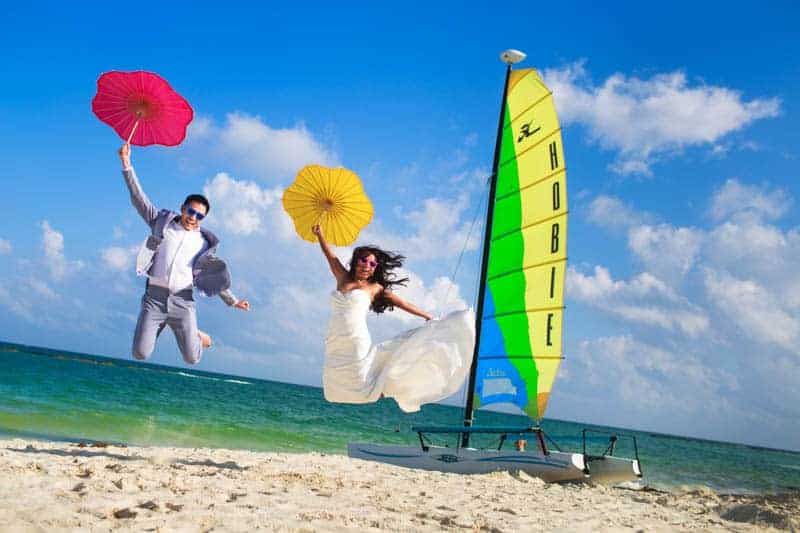 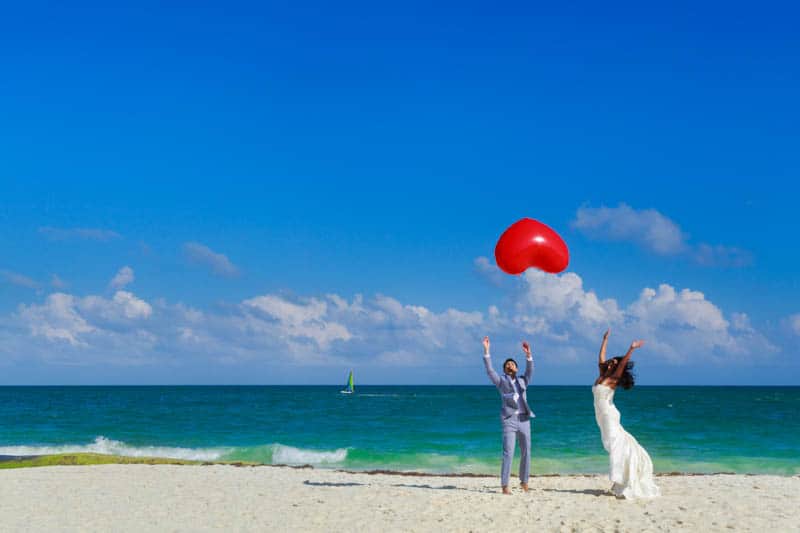 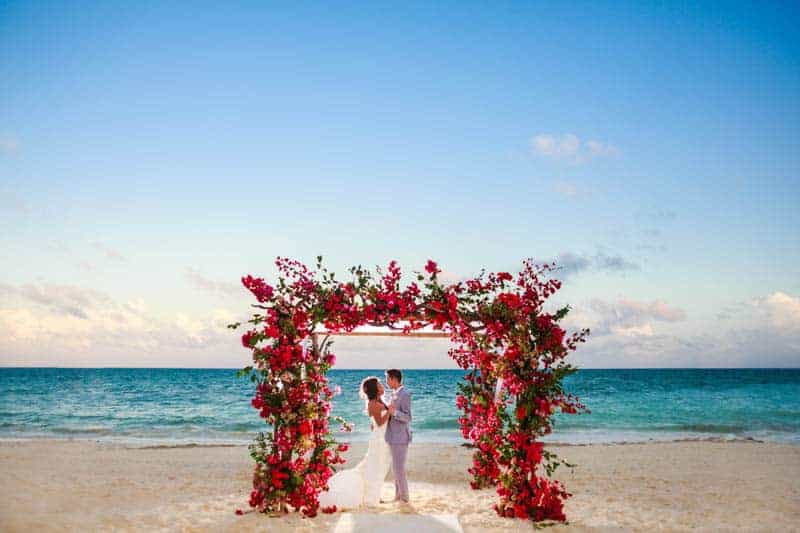 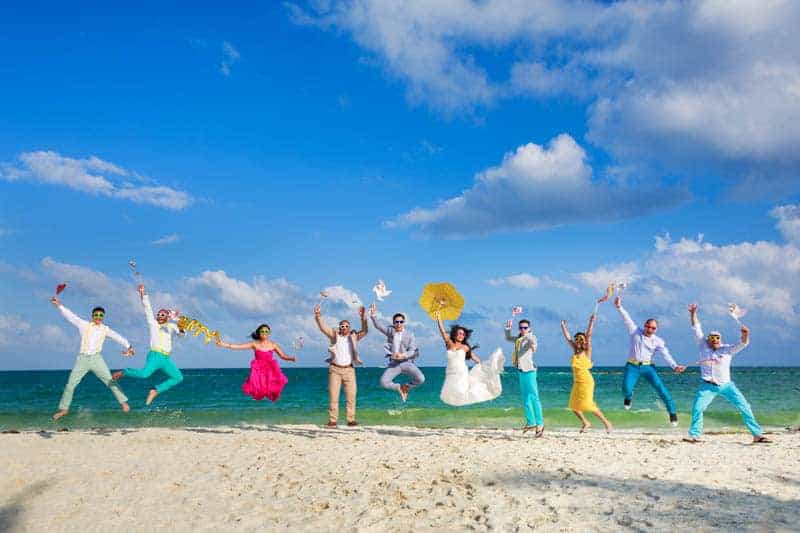 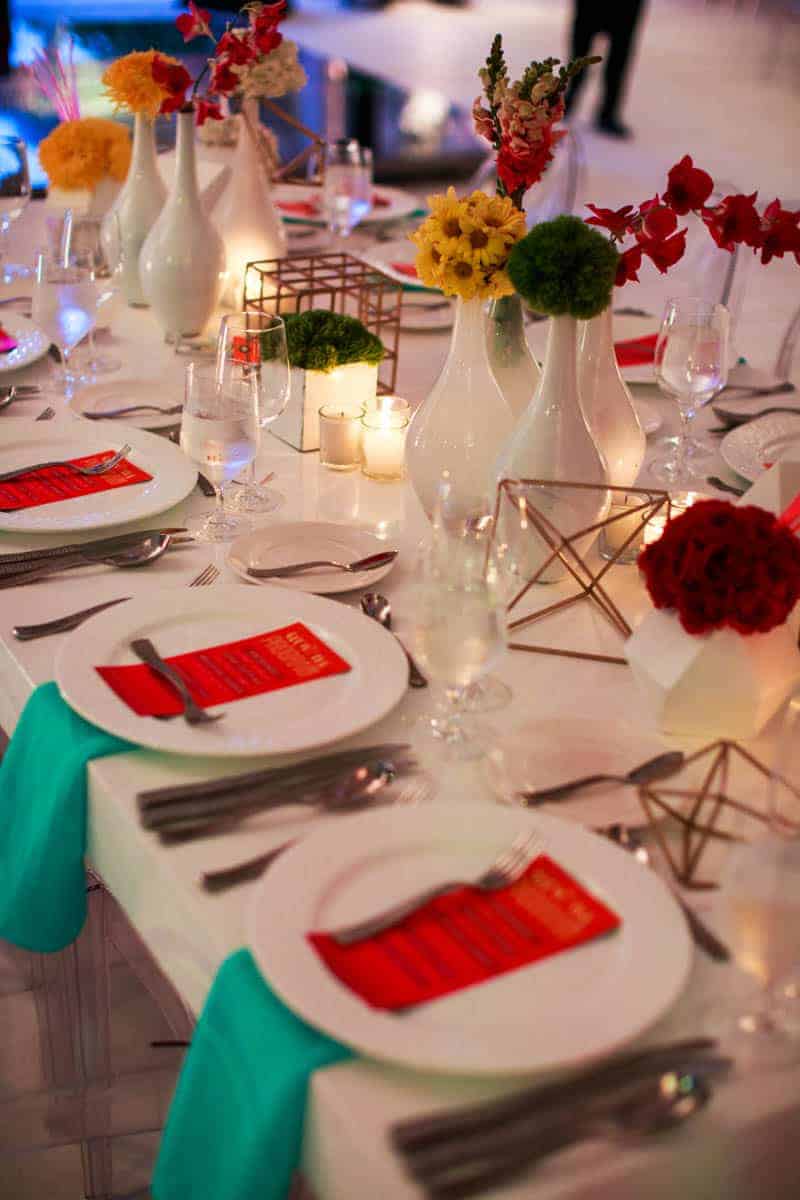 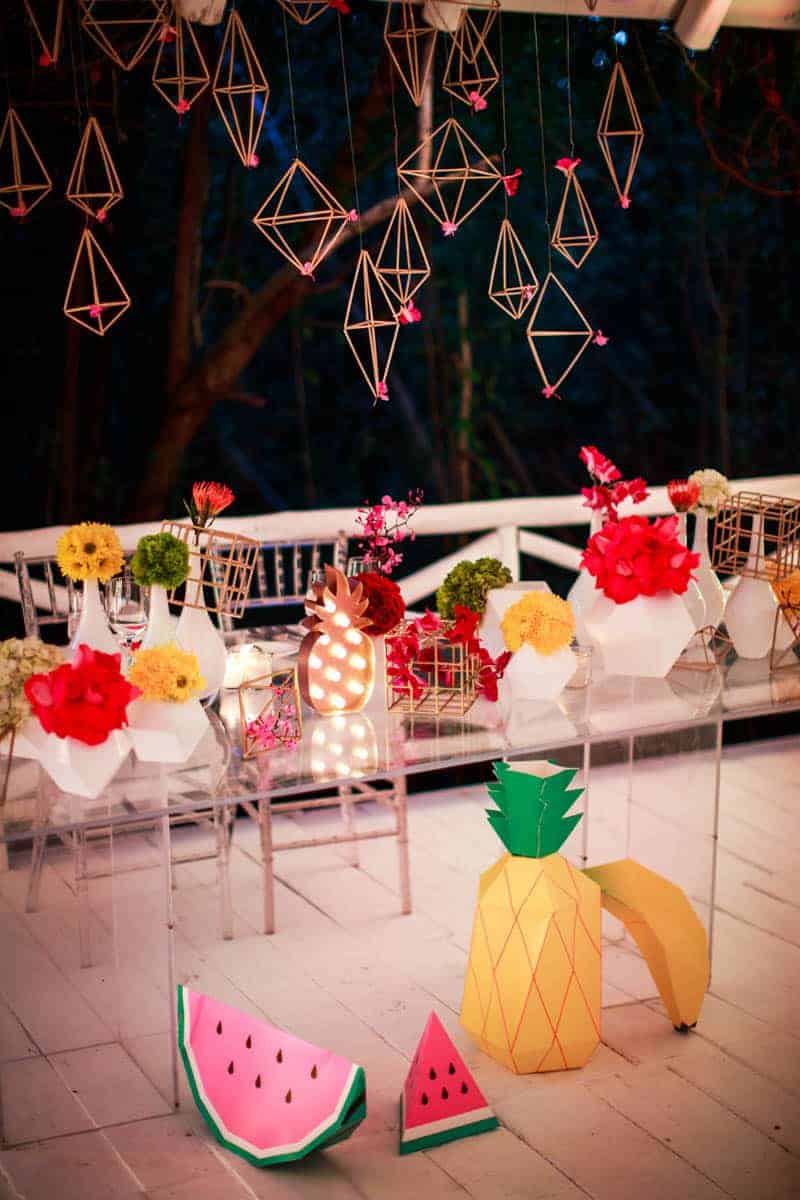 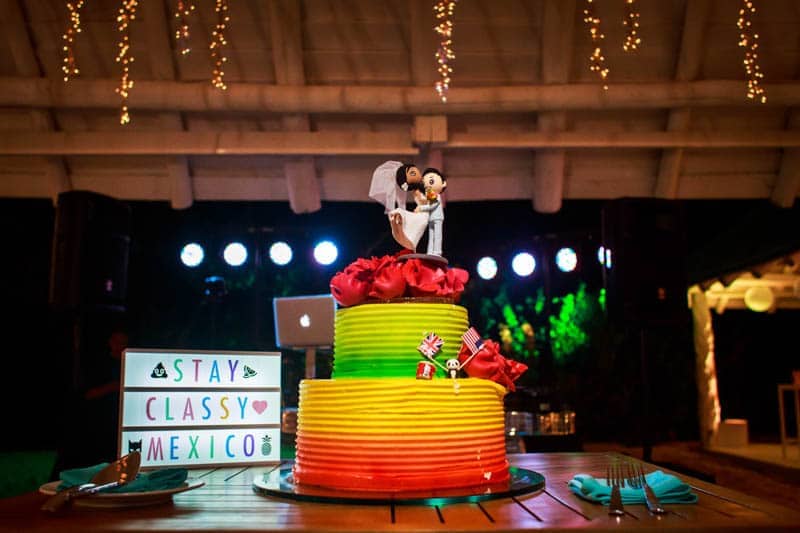 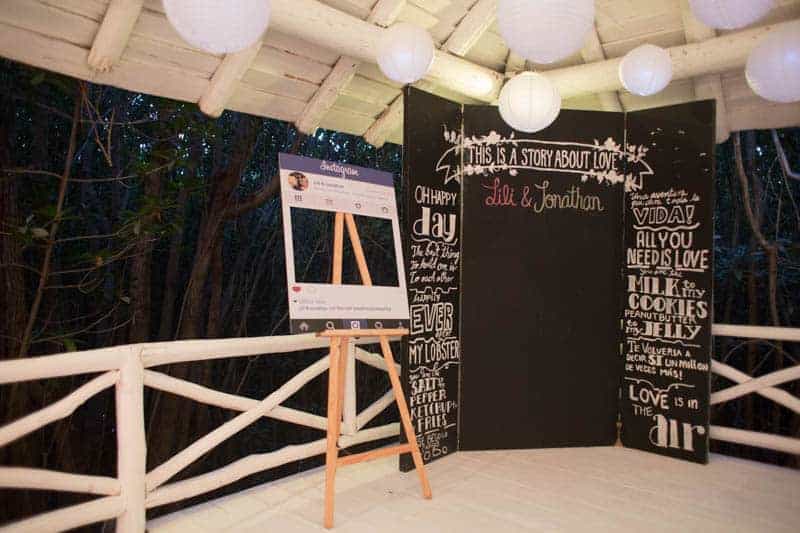 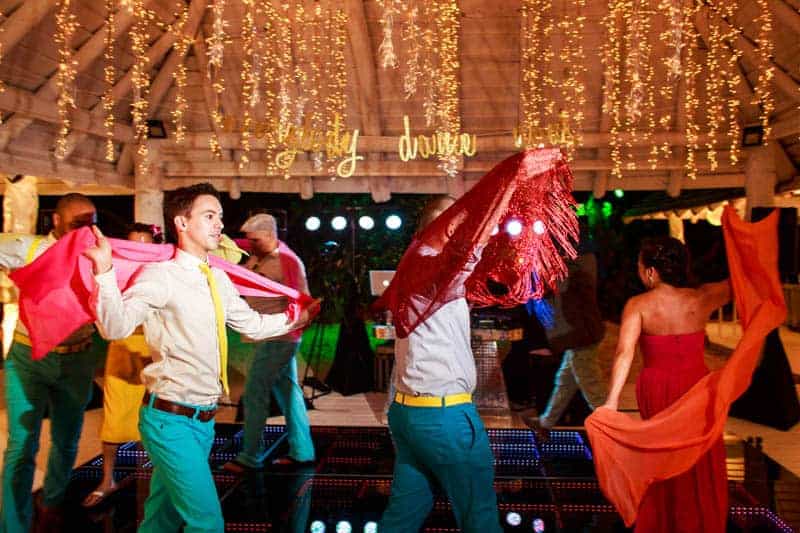 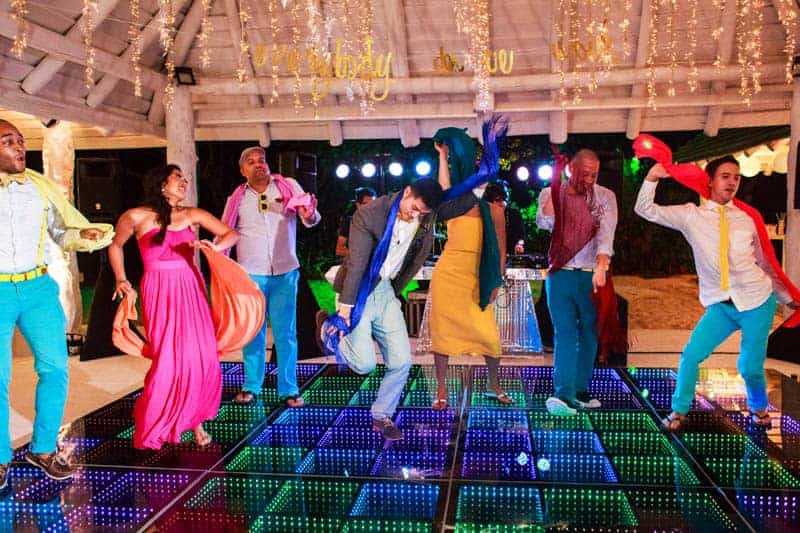 The wedding filled the day with unexpected surprises, to the delight of their guests. Reminiscent from the movie ending of “27 Dresses”, the bridal party consisted of the bride’s 6 Brides-men donning turquoise ombre pants with neon yellow embellishments alongside her 3 people of honor. Notably, her groom had his best man standing by.

The wedding party entered the ceremony dancing to Gloria Estefan’s “Conga” with DIY pinwheels,ribbon twirlers and a large “YAASS!” sign. Strikingly, the bride made her grand entrance to Europe’s “Final Countdown” as their guests were confetti-bombed down the aisle. During the ceremony, the couple “Rick-rolled”with their guests with their short and lyrical wedding vows. After a first kiss jump, guests threw beach balls in the air as the newlyweds walked down the aisle.

Wondrous colorful shapes, paper craft and flower combinations burst throughout the wedding décor which created a playful atmosphere with plenty of visual surprises. The reception was wild, with games, cash cannons (with play money), a crazy dance floor, confetti storms and fireworks at the beach.

Local vendors in Playa Del Carmen were chosen based on recommendations from destination wedding forums, their resort coordinator and their of day-of-coordinator by My Perfect Wedding Mexico.

Because the wedding took place outside of their native hometowns, planning took place predominantly over email with various local vendors in Playa Del Carmen with the help of day-of-coordination by My Perfect Wedding Mexico. Monthly Skype meetings took place with the Banyan Tree Mayakoba resort coordinator six months prior to the wedding date to iron out the details, making them confident that the day would be executed flawlessly. In addition, the couple had an charismatic photographer and videographer that made them feel at ease with their unique wedding theme. For Ron and Veronica, the best thing about a resort wedding was that it felt like “you can set it, and forget it!”.

THIS BRIDE SHARES HER TIPS FOR PLANNING A WEDDING IN THE MIDDLE OF PANDEMIC
March 28, 2021

PASSPORTS AT THE READY FOR THIS SUPER SWEET PINK INSPIRED MICRO-WEDDING IN SAYULITA, MEXICO
February 26, 2021