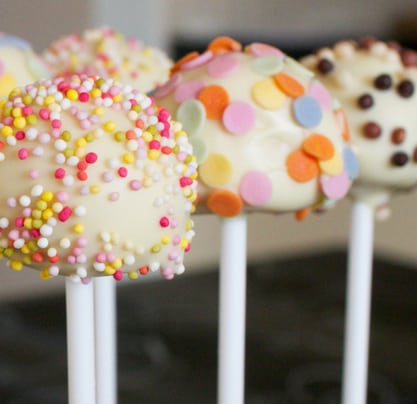 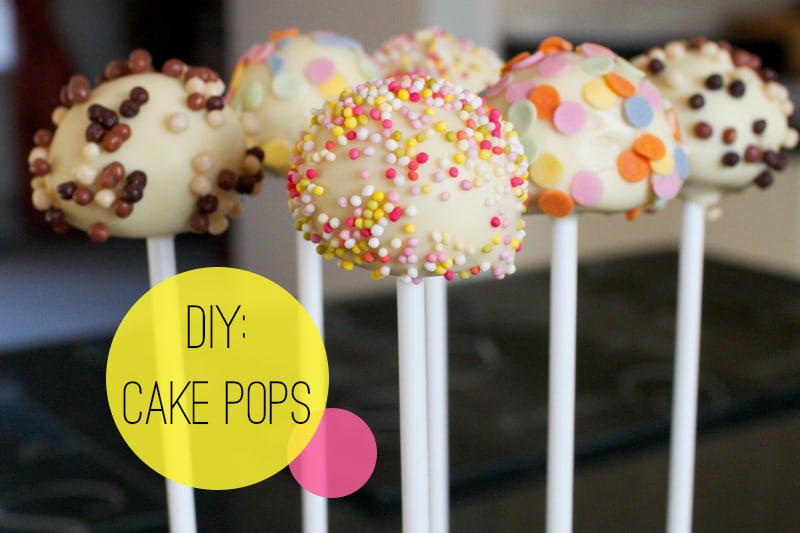 I don’t think I’ve ever heard anybody utter the phrase ‘I don’t like cake pops’. Hence why they’re the perfect party favor or beautiful addition to a dessert table! And the best news? They last up to 2 weeks in the fridge! So there’s no need for last minute baking stress, simply whip up a batch in advance and leave them ready for when you need them! I can’t promise that they won’t be eaten before that date though…

♥ A cake mix (mine was vanilla!)  ♥ Cake frosting  ♥ Cake pop sticks (bought on Ebay!)  ♥ Florist’s foam (or something to be able to place the cake pops in to suspend them)  ♥ White/ milk / dark chocolate  ♥ Sprinkles and any other decorative items! ♥ Strong will power in order not to eat them while making them 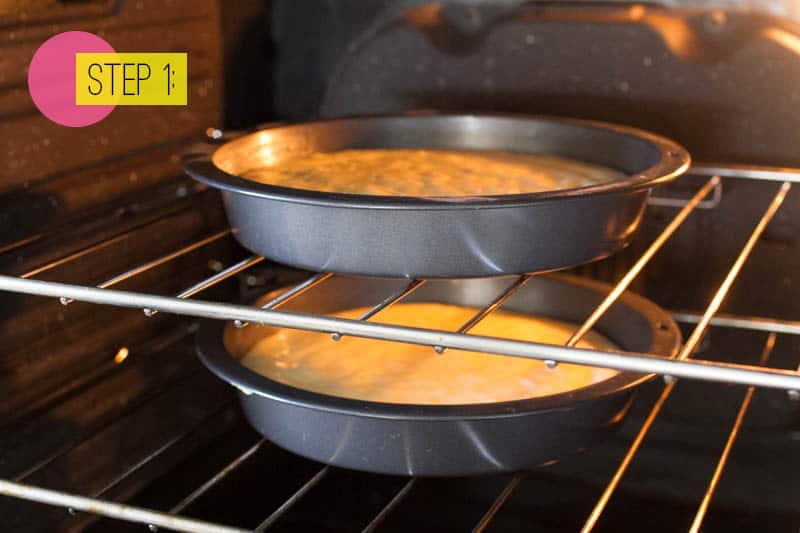 Step 1: Bake your cake mix as instructed on the box! 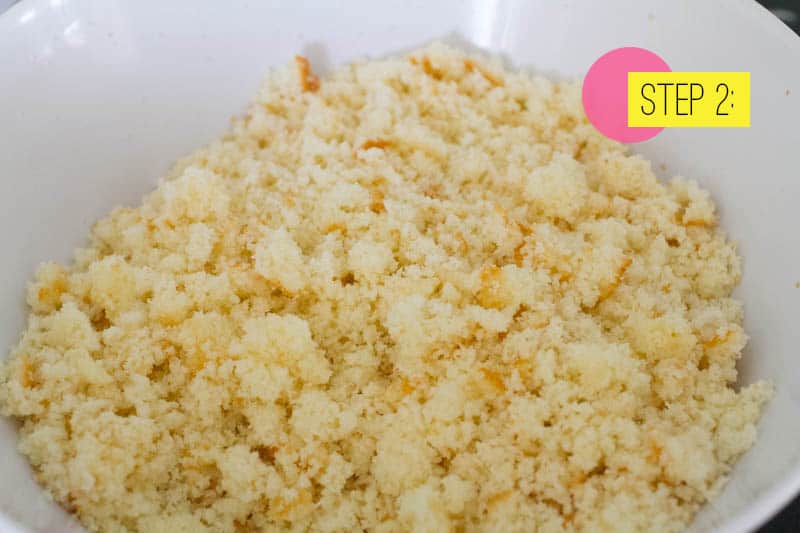 Step 2: Once the cake is baked, take it out of the oven and leave it to cool. Then rub your pieces of cake together and continue to do so until the entire cake is crumbled! Sometimes the outer edge of the cake is a bit hard so you can just cut those pieces off if you need to as they’re pretty difficult to crumble! 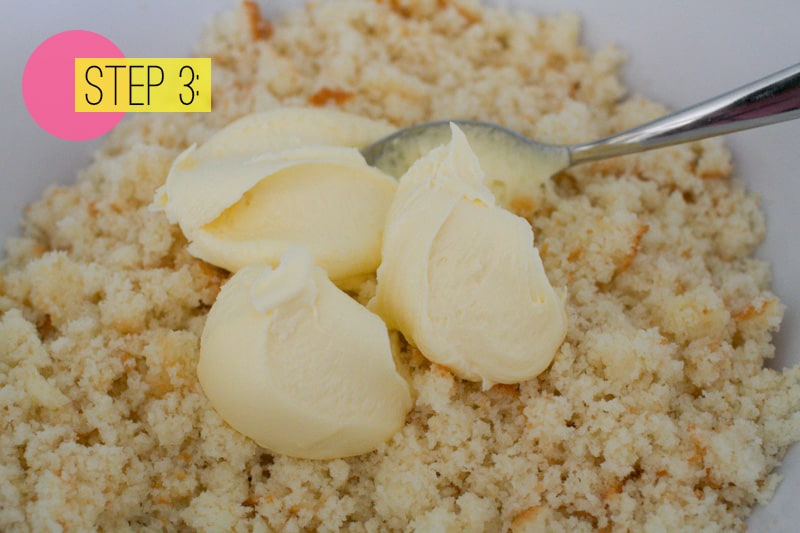 Step 3: Add a few scoops of your frosting and begin to mix in to all of the crumbs, I ended up using about 5 scoops all together. You want to aim to get a consistent mixture throughout but be careful not to make the mixture too moist otherwise the cake pops will just slide back down the sticks! 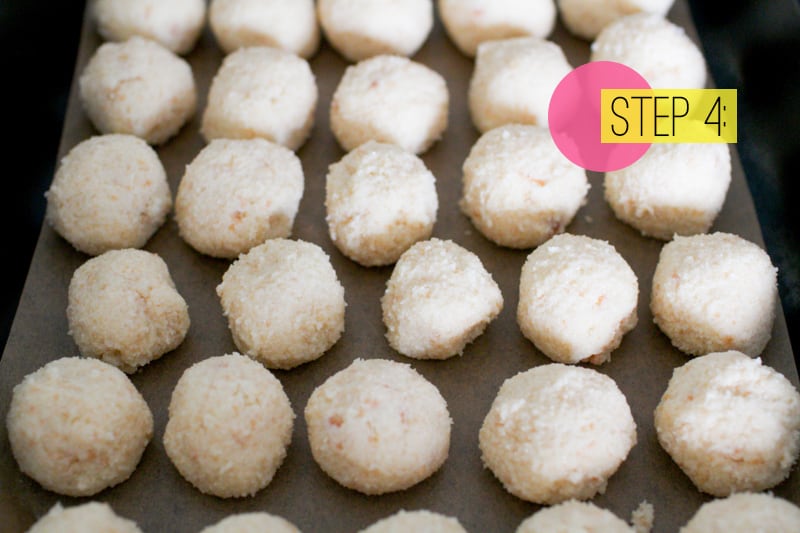 Step 4: Start to roll up the mixture into small balls and place on either a tray or plate lined with baking paper. You want the size of the balls to be slightly smaller than a golf bowl! Once you have rolled up all of the mixture you then need to pop them in the freezer for 15 minutes. 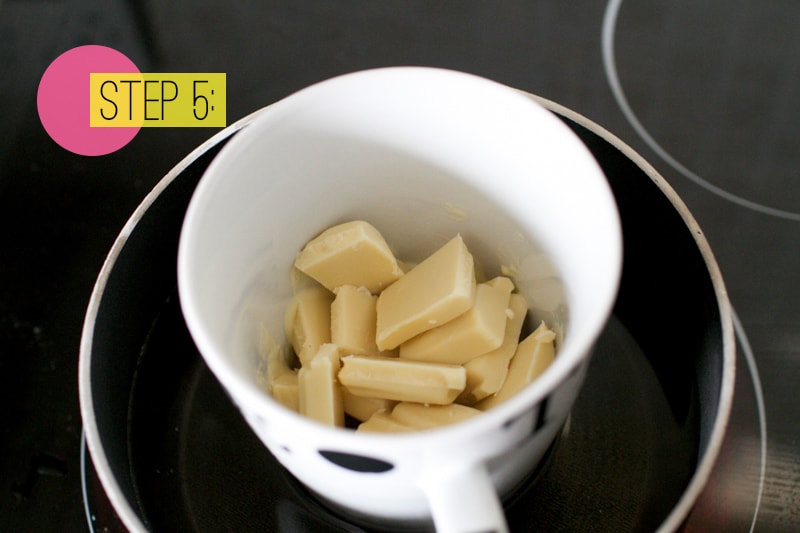 Step 5: While they’re in the freezer, start to melt your chocolate. I did this by placing the chunks of chocolate in a mug over some boiling water. 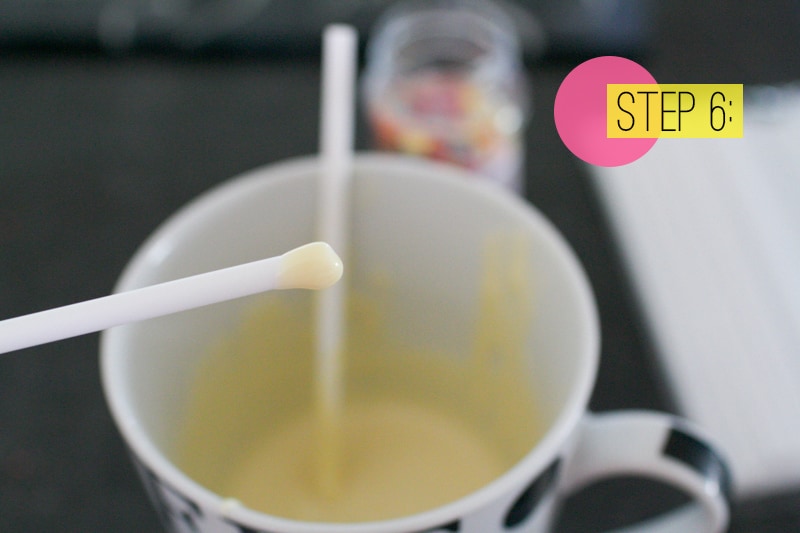 Step 6: Remove the balls from the freezer and get ready to turn them into cake pops! First dip your stick into the melted chocolate, half an inch to an inch is a good amount. 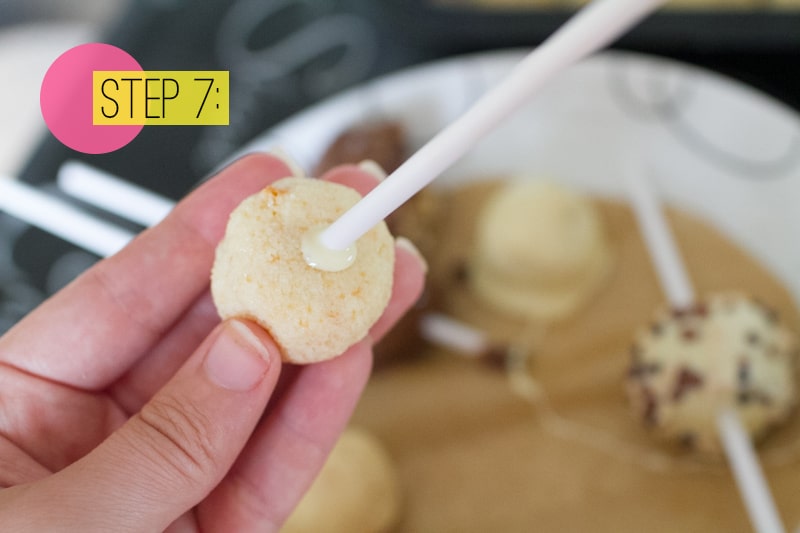 Step 7: Next, place the stick about half way into the cake pop. 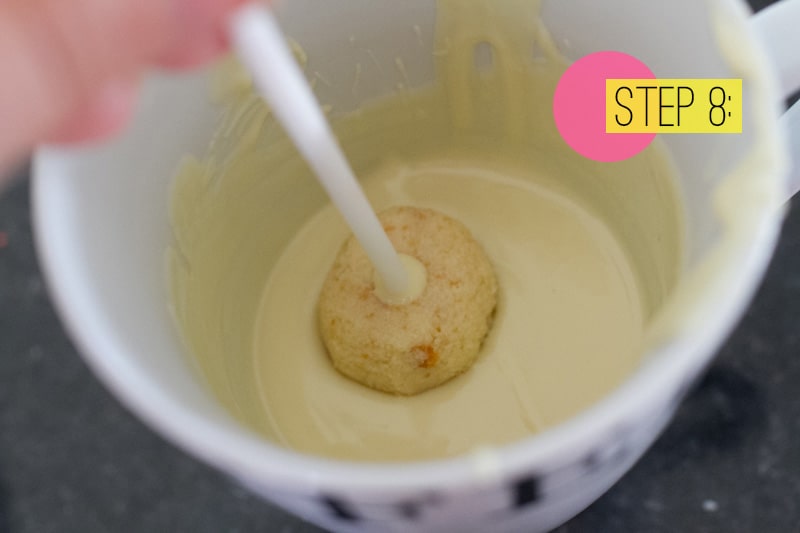 Step 8: Dip your cake pop into the melted chocolate carefully and let the chocolate surround the entire ball. Don’t move the cake pop around too much within the chocolate because the stick will become loose and you may lose a cake pop! 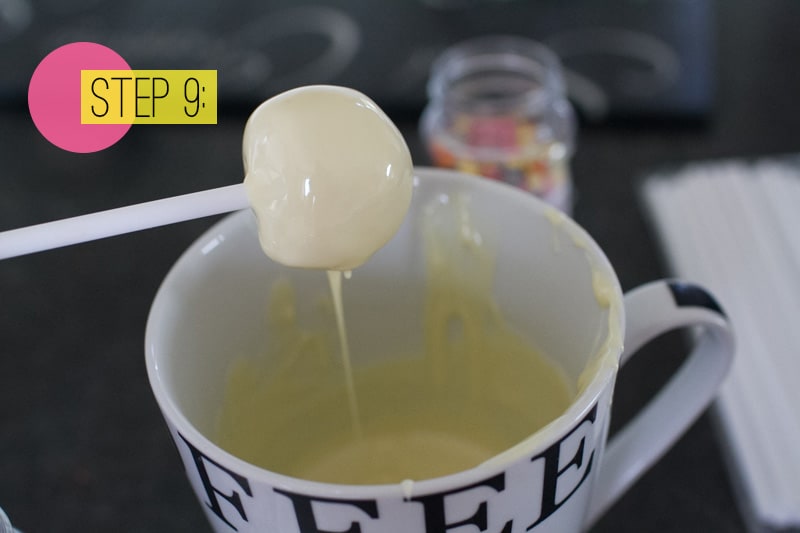 Step 9: Allow the chocolate to drip for a while to make sure any excess chocolate isn’t left on the cake. (I know what you’re thinking, what the hell is wrong with excess chocolate?! You just want the cake pop to be as light as possible so that there’s no risk of it sliding down the stick!) Holding the stick in one hand & tapping your wrist with the other hand helps to lightly knock the rest off. 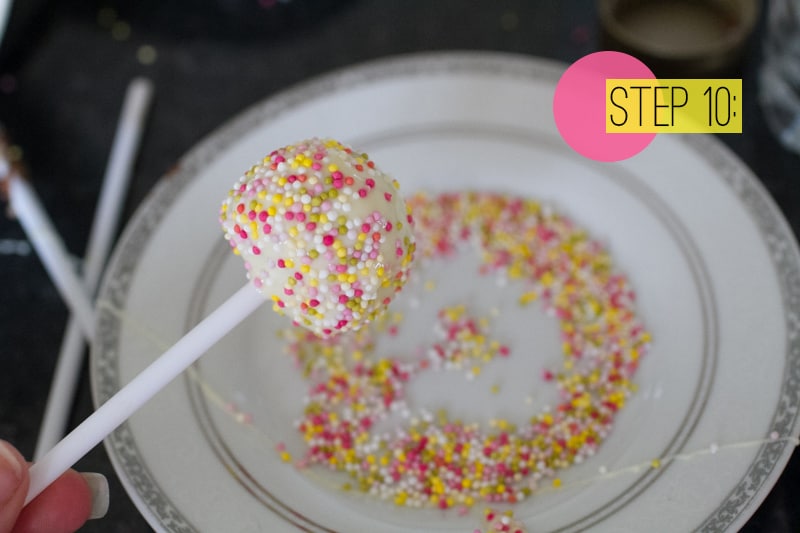 Step 10: While the chocolate is still soft, decorate however you like! 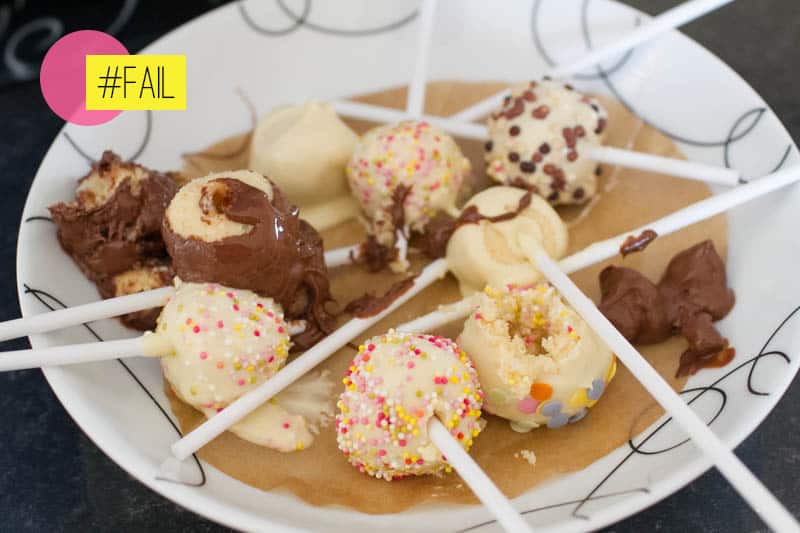 Don’t worry if it doesn’t go according to plan straight away, I had MANY failed attempts and lost cake pops in melted chocolate!! It was so awful having to eat all of those mistakes too… 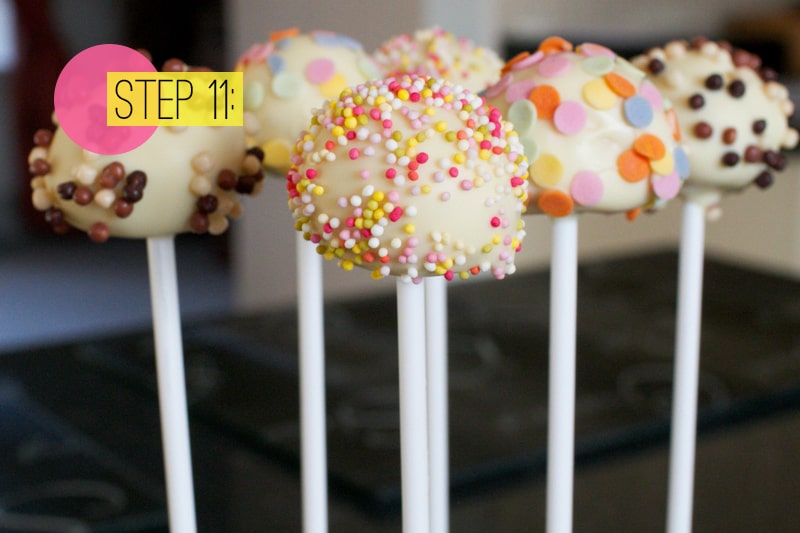 Step 11: Pop your sticks in place and put in the fridge! I placed mine in some florists foam but you could use styrofoam or something similar!

Enjoy! And let me know how you get on! I’m going to make another batch this Saturday for a friends Birthday, I think they’re such a fun alternative to a cake!